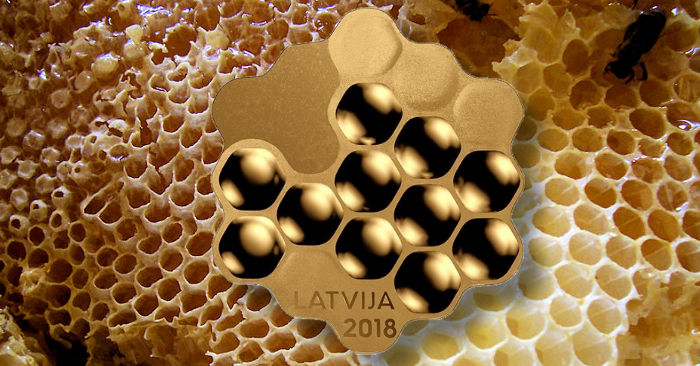 The Latvijas Banka is issuing (22nd May) a collector coin entitled “Honey Coin,” whose design features honeycomb cells which form a rough outline of the geographic contour of Latvia and the Gulf of Riga. The design is based on a concept submitted by Artūrs Analts that won the first prize in an earlier competition announced in January 2017 to search for ideas to create an innovative coin in terms of its motif, design, or technical solution. Honey has a special role in Latvia, and along with those diligent honey bees, it is widely present in Latvian folk songs. It is an important ingredient to Latvian food and recipes as well and is additionally used as a traditional medicine and cosmetics product. Latvian citizens, who are considered “busy as bees” in their day-to-day lives, contribute to their country’s well-being in much the same way that bees fill a hive with honey. Bees also have a significant role to play in maintaining biological diversity, and their presence is an indicator of the state of the health of nature and the overall environment.

Since time immemorial, Latvians have associated the work of beekeepers with a healthy lifestyle. The job of beekeepers involves a lot of hard work, on the part of both the bee-keeper and bees, who produce aromatic beeswax cells in which they store golden honey, often compared to liquid amber. Bees have been working hard on the Earth for millions of years, though the one-sided relationship between humans and bees emerged as a result of a continuous fight for livelihood. Initially, our species used the generous gifts arising from the efforts of bees in a cautious manner, as it was the honey harvested from the nests of forest bees that our ancestors first tasted. The oldest man-made beehives from the 10th century B.C. have been found in the Middle East in the territory of present-day Israel. However, the scientific foundations of modern beekeeping were developed in the German states only at the end of the 18th century, and by the 19th century, beekeeping specialists in various countries across the globe contributed to the creation and improvement of the modern hives with removable frames (or honeycombs) with bee-entrances.

Throughout the centuries, honey was used to cure wounds and illnesses, and in ancient Egypt, the pharaohs would make use of honey during religious rituals. In ancient Greece, the mathematician Pythagoras (c. 570–495 B.C.) and philosopher Democritus (c. 460–370 B.C.) believed that eating honey was a precondition for a long life. Aristotle (384–322 B.C.), the founding father of natural sciences, recommended honey as a means for curing eye maladies. Hippocrates, the founder of medicine, invited people to use honey both on its own and together with water or wine, as he believed that honey was nourishing, that it made one’s face look better, and that it had medicinal properties. The ancient Greeks appreciated honey to such an extent that they featured a honey bee on their coins with honey serving as a valid form of currency for the Romans since many people paid their taxes in honey. Around 6,000 years B.C., when the planet’s climate was warming up, the territory of present-day Latvia saw the first bees and archaeological excavations suggest that it was already in the period from the second to the fourth centuries A.D. that early Baltic inhabitants consumed honey. Between the 10th and 14th centuries, honey and beeswax, along with amber and cereals, played an important role as a mode of exchange and market goods. At the beginning of the 19th century, many landlords set up permanent apiaries in their forests, to the degree that by the end of the 19th century one farm out of five had an active and producing apiary. However, these beehives usually consisted of just a few bee colonies since honey was used almost entirely for home consumption.

An interesting fact about bees is that none of the bees living in a colony (which commonly consists of between 30 to 80 thousand bees) ever sleeps. Each bee collects food for the colony, construction materials for the hive, and breeds new generations of bees. The collected nectar and pollen are turned into honey and bee bread, a pollen ball packed by worker honeybees into pellets. Bees are up to one and a half centimetre-long winged insects weighing about one-tenth of a gram. However, their small size does not deter them from producing a fantastic quantity of honey, which is then harvested by people every year.

There is a Latvian saying which goes: “Lazybones, go to a bee, to learn its virtue. It has neither masters nor elders in its sweet daily job.”

Today honey in Latvia is consumed on its own and it is used in confectionery, beverages, traditional medicine, in sauna, massages, and cosmetics. Honey contains antioxidants and vitamins, mineral substances and trace elements, and is known to possess some antibacterial properties. Those who suffer from chronic hay-fever are often advised to consume honey from local producers in order to build up a greater tolerance to the pollen in the air. 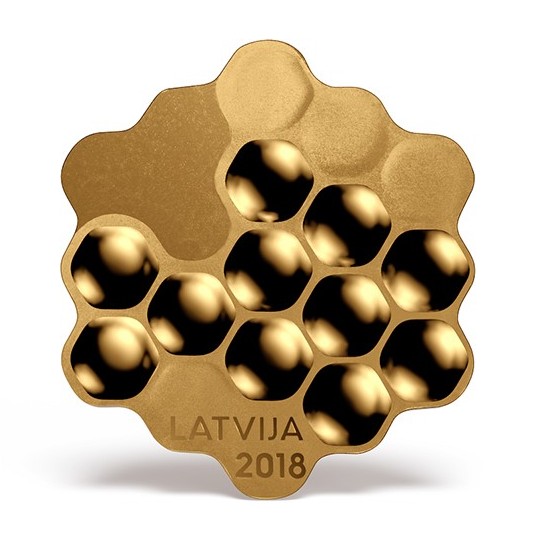 This honeycomb cluster-shaped coin is produced by the Mint of Lithuania at their facilities in Vilnius, on behalf of the Bank of Latvia, and is designed by award-winning artist Artūrs Analts. The obverse features honeycomb cells which form a rough outline of the geographic contour of Latvia and the Gulf of Riga with various types of frosting applied to achieve the effect. The inscription LATVIJA is placed in the lower left part of the coin with the year 2018 below it. 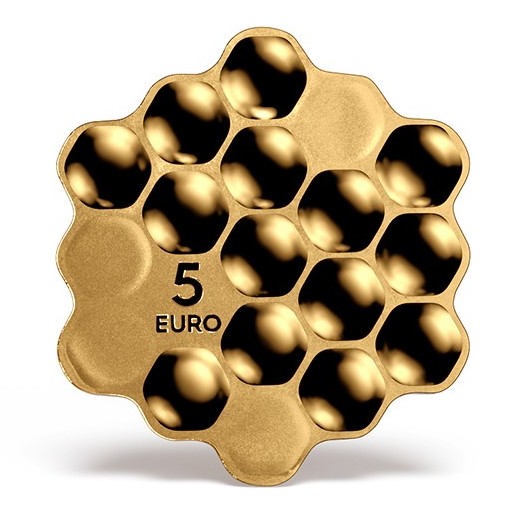 The reverse features honeycomb cells. The number 5 is placed to the left of the centre, slightly lower, with the word EURO featuring below it. The shape of the gold-plated silver coin is unique as several coins can be placed side-by-side like pieces of a puzzle to construct an even larger honeycomb, the same way bees do in their hive.