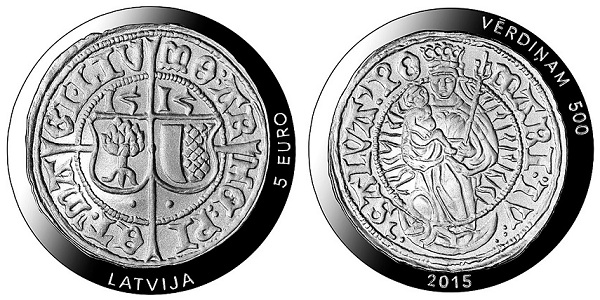 The Bank of Latvia has launched a new silver coin marking the 500th anniversary of the first issue of the Livonian Ferding currency, a historic currency unit once used in Livonia, or present-day Latvia.

The name of this Livonian Confederation coin is of German origin, with the word verding deriving from the Middle Low German dialect — verdink means “a quarter.” Thus, in the monetary context, it simply referred to a silver coin equal to a quarter mark.  In 1515, new coining regulations were adopted and reflected the search for a larger-value legal tender coin characteristic of Western Europe at that time. In Riga, silver coins of greater denominations — that of Marks and ferdings — were struck; one mark was worth four ferdings, or 36 schillings.

Livonia’s first ferdings were co-issued by the Archbishop of Riga Jasper Linde (1509-1524) and Master of the Livonian Order Wolter von Plettenberg (1494-1535). Ferdings were struck from silver of .930 fineness in Riga, Tallinn, and Tartu. Since 1526, the ferdings struck in Riga depicted the large coat of arms of the city of Riga, which included a lion’s head in a gate with two towers, crossed keys, and a cross above the gate.

The value of the silver content of the coins relative to other monetary units were subject to constant change and some devaluation. In 1525, the ferding was equal to 10 schillings, and between 1551 and 1557 it had increased to 14 schillings. By 1557, ferdings were being struck in silver of just .578 fineness.

When the Livonian Confederation collapsed in the mid-16th century, Riga managed to retain its free city status from 1561 to 1581 and the town council of Riga continued to mint coins irregularly, including ferdings. Around 1565, the silver content in the Riga coins was secretly reduced, and ferdings were struck from debased silver of .437.5 fineness. Then, as the period of Riga’s free city status ended, ferdings disappeared from circulation.

During the period of Polish rule, Governor of the Duchy of Pārdaugava Jan Chodkiewicz (1566-1579) had a small amount of ferdings struck in the Dole Castle in 1573. During the so-called Swedish era, ferdings were not struck, but their name was transferred to drei-polchers, which were different in terms of metal content, weight, and size, but still amounted to a quarter mark. Eventually, with the incorporation of Riga (1710) and Vidzeme (1721) into the Russian Empire, Russian Rubles and kopecks came into circulation and the ferding was equated to 1.5 kopecks. 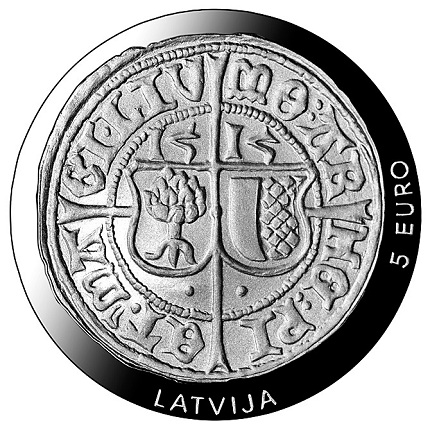 The coin is designed by Latvian artist Laimonis Šēnbergs and is struck by the Royal Dutch Mint on behalf of the Bank of Latvia. The obverse design depicts the image of the obverse of the first ferding coins struck in 1515, which feature the family coats of arms of Riga Archbishop Jasper Linde (1509-1524) and Master of Livonian Order Wolter von Plettenberg (1494-1535), with the year 1515 above them.  A abbreviated legend appears in Latin and is short for:  MO(neta) AR(c) HE:PI(scopi) ET.MA GI(stri) LIV(oniae),  which translates to, “A coin of Archbishop and Master of the Livonia.” The long cross of the Livonian Order cuts the legend into four segments. The shining outer ring bears the semi-circled inscriptions LATVIJA and 5 EURO at the bottom and the right, respectively. 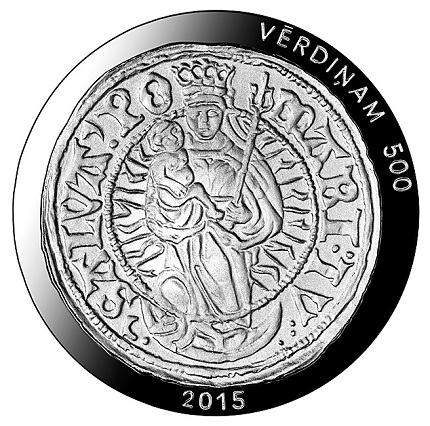 The reverse side includes an image of the reverse of the same ferding struck in 1515, featuring a standing Virgin Mary with child in her right hand, and scepter in her left. The image is encircled by a halo and the Latin legend MARI[a] TU[um] SALVA.PO[pulum], which translates to “Mary, save your people.” The shining outer ring bears the semi-circled inscriptions 2015 and VĒRDIŅAM 500 (500 years of ferding) at the bottom and top right.

The coin is now available from the Latvijas Banka Cashier’s Offices (K. Valdemāra 1B in Riga and Teātra 3 in Liepāja), with additional points of sale such as shops specializing in coins, books, souvenirs, and jewelry. As of December 1, 2015, collector coins issued by Latvijas Banka and other numismatic products are for sale online from the JSC “Latvijas Pasts.”