The Austrian Mint have launched (11th April) the latest silver coin in the captivating “Rome on the Danube” series.  This coin marks the fifth of the series and the third year of release and further highlights the historic contribution attributed to the Roman Empire.

Influential in many regions of Europe, the Roman Empire were able to spread their culture, governance, and way of life to almost every corner, and today’s Austria was no exception.  Much of this was because of the Danube River, one of the key transportation links in the network of European rivers.  Along the Danube, the Romans established or adopted earlier settlements that thrived under Roman rule.  Many of these settlements are still important hubs of transportation and economic contributors of Austria today, some 1500 years later. 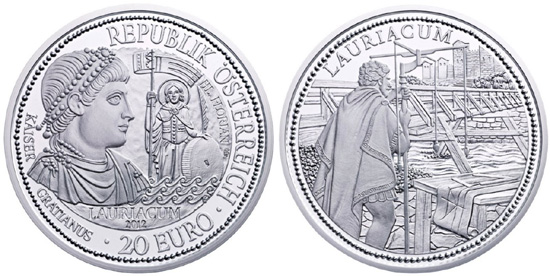 Designed by the mint’s Chief Engraver, Thomas Pesendorfer, the obverse of the coin features a profile portrait of Christian Emperor Flaviianus situated to the left half. Behind him stands St. Florian, the patron saint of Austrian firefighters, holding a flag, a millstone, and palm frond, a symbol of martyrdom.  The waves represent the Enns River along which the settlement was located.  Along the outer edge includes the country of issue “REPUBLIK OESTERREICH,” (Republic of Austria) the name of the emperor “Kaiser Gratianus”, as well as the 20-euro face value.  The year of issue 2012 is centered in the lower half of the design field under the name of the settlement, “Lauriacum”.

The reverse of the coin is the work of Mint engraver Helmut Andexlinger who decided to feature the river, bridge building, and roads in general, since the city of Lauriacum was a key hub of transportation both along the river and the roads of this region. The region of what was Lauriacum is located at the mouth of the Enns River where it flows into the Danube River, and today’s twin cities of Lorch and Enns are located.  Enns is the oldest city of Austria, and a nearby village still carries the name of Lorch, based on its Roman history. To the left side, a Roman “agrimensor”, or surveyor is depicted overseeing the construction of a bridge while taking measurements with the help of a “groma” or surveyor’s cross.  On the table to his right side, plans and other geometrical tools lie on a table at his side.

The new coin is struck in proof quality in .900 silver and with a maximum mintage of 50,000 pieces. Each coin has a weight of 20 grams, a diameter of 34 mm and is packaged in a clear plastic capsule with presentation box and an individually numbered certificate of authenticity. A wooden case for the whole collection of six coins, decorated on the top with a facsimile of a Roman sestertius coin with a portrait of the Emperor Marcus Aurelius (161-180 A.D.) is also available.

For more information on this and other coins in the series, please visit the website of the Austrian Mint at: https://www.muenzeoesterreich.at/Filter/View/?bereich=Sammeln#&serie=Rom%20an%20der%20Donau&sort=ausgabetag&order=desc