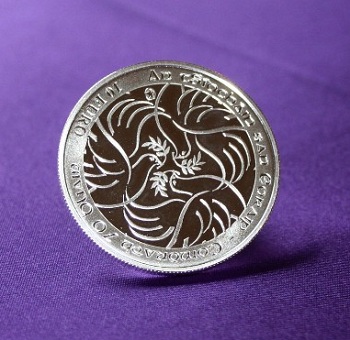 The Central Bank of Ireland officially launched its last collector coin of 2015 yesterday in Dublin. The new sterling silver crown coin celebrates 70 years of Peace in Europe and its release was carried out with the reverence and esteem the anniversary deserves. Held at the Cathal Brugha Barracks in Rathmines, the Central Bank invited Ireland’s most recent former President to speak at the launch and to offer her insight into what the anniversary meant to her as both a former Head of State and a European.

Professor Mary McAleese served as Ireland’s eighth president from 1997 to 2011. She was her country’s second female president; in succeeding Mary Robinson, she also became the world’s first woman to succeed another woman as an elected Head of State. 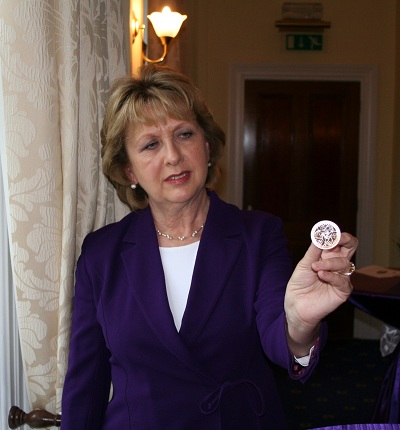 The 70th anniversary of Peace in Europe was observed in almost every country on the continent, marking the greatest span of time in Europe’s long history in which there was no long-term conflict or protracted war. With the exception of the break-up of Yugoslavia between 1991 and 1995, and NATO operations in 1999 in Bosnia and Hercegovina, Europe has now enjoyed 70 years of uninterrupted peace since the end of the Second World War.

The launch was hosted by Stefan Gerlach, the Central Bank’s Deputy Governor since 2011. He introduced Professor McAleese to the room of invited guests from the fields of business, art, diplomacy, and media. In her opening comments, the former President praised the anniversary as well as the coin’s design, focusing on the great efforts to achieve and maintain the peace which has been enjoyed by the continent. 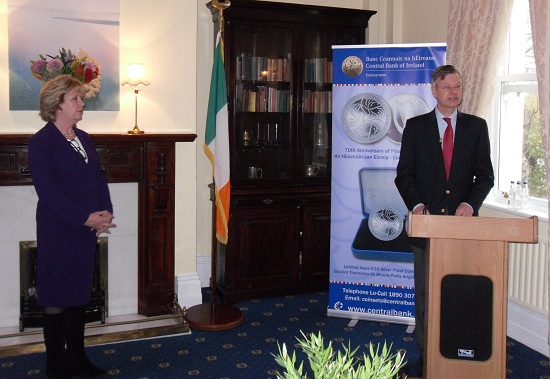 McAleese with Stefan Gerlach, Deputy Governor of the Central Bank of Ireland.

Professor McAleese spoke of the institutions that have emerged as the result of greater European Unity and of the ideals of Schulman and Monnet, architects of what would later emerge as the European Union. She spoke of international bodies like the United Nations, which succeeded the League of Nations in 1945. Although Ireland managed to maintain neutrality during the Second World War, she spoke of the many contributions Ireland has since made to peace-keeping efforts under the auspices of the UN around the world. 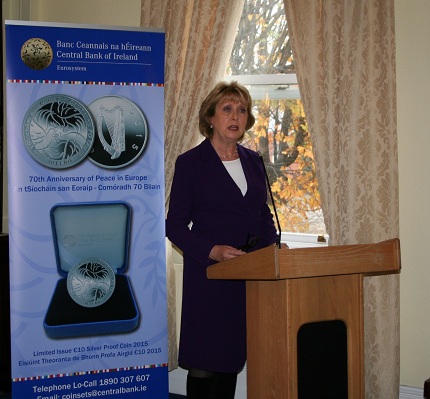 Professor McAleese also mentioned how poignant it was for this important anniversary to be honored on a coin, as the coin’s value symbolizes the greater value peace has in our lives as individuals and as nations.

After the former President concluded her speech, she and Deputy Governor Gerlach presented some first strikes of the coin. The first one was presented to Lieutenant Commander Brendan McAndrew, who received it on behalf of the Cathal Brugha Barracks. 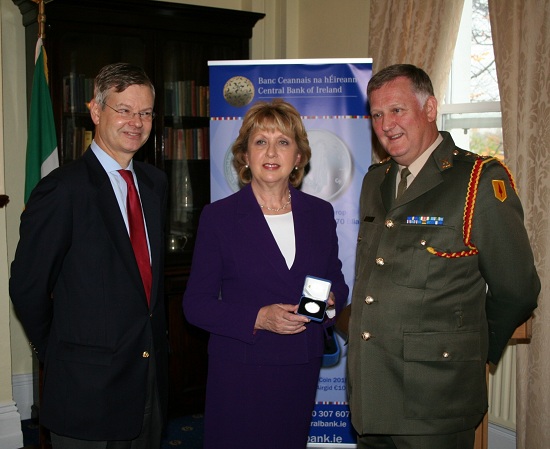 The second strike was then presented to the former President, who once again praised the distinctive design as well as the talents of the artist, Michael Guilfoyle, who then received the third strike from the Deputy Governor.

After he was presented with the third strike of the coin he designed, Mr. Guilfoyle described his inspiration for the image. He sought to fashion a clean, linear, and subtle representation of the dove of peace, shown in a conjoined circle of three — representing a country in conflict, its enemy, and a neutral country, as in the case of Ireland during the Second World War. 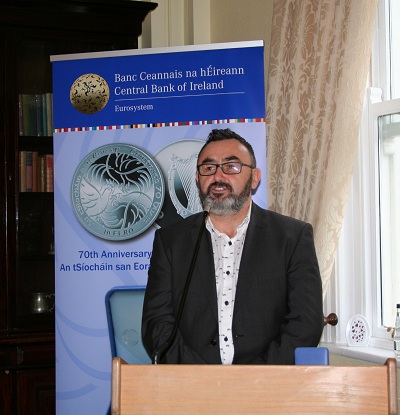 As the coin was produced by the Mint of Austria, their representative, Sabine Deopito, answered questions from interested guests about the technical aspects of producing Proof quality coins, as well as on the process of turning a design into a finished product. 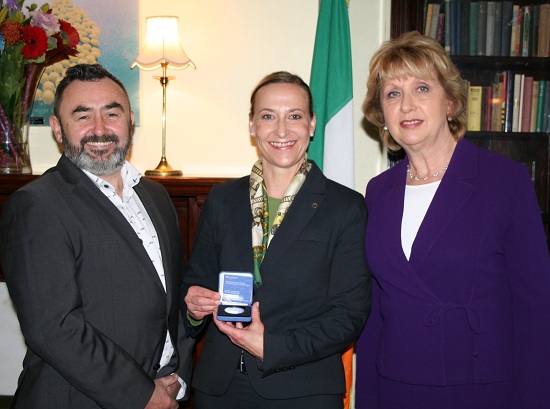 Guilfoyle and McAleese with Sabine Deopito of the Austrian Mint.

With the presentations concluded, invited guests were able to speak with the former President about her years in office, as well as her insights on how Ireland has been able to maintain its place on the international stage as a small but seemingly influential country.

The latest Irish silver crown is part of the hugely popular EUROPA Silver Programme, which Ireland has participated in annually. This year’s theme for the program was “seventy years of Peace in Europe”; this is the final release of the 2015 series. The coin is now available from both the mail order centre and the Central Bank’s main lobby retail desk on Dame Street in Dublin; the coin’s mintage is authorized to 8000 pieces.

For more information on this and other coins offered by the Central Bank, please visit their Web site. International orders will be dispatched where applicable.

I would like to thank the Central Bank of Ireland – Collector Coins Division, as well as the Central Bank’s Press Department for their kind assistance with this article; it is greatly appreciated.