During one of the more festive occasions hosted by the Collector coins department of the Central Bank of Ireland’s currency centre, the official launch of their latest silver coin was a hailed great success by both guests and participants alike. 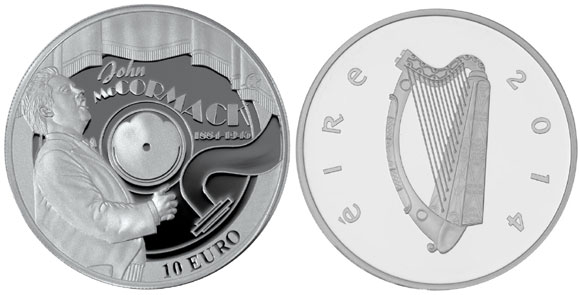 The evening’s launch of the coin honoring one of Ireland’s most celebrated Tenors, John Count McCormack (1884-1945) took place essentially – just where it began. Before John McCormack left Ireland in 1905 for more formal training in Italy for what would become a stellar career in terms of the early 20th century, McCormack began his initial training with a professor by the name of Dr. Vincent O’Brien who lived and taught in a stately Georgian terraced home located at number 37 Parnell Square, just off O’Connell Street in the heart of Dublin.

It was for this reason that the evening’s events took place at the very same location – though since the late 1950’s, the building has been home to the prestigious Teacher’s Club who were not only pleased to host the launch, they were also quite proud to show off the many articles and mementos associated with John McCormack which they have accumulated over the years.

The commencement of events was introduced by the Club’s Director, Mr. Tadhg McPhaidin who spoke of the building’s early association with McCormack and that of the O’Brien family who had lived at the location until Professor O’Brien’s death in 1948. One of the more entertaining interludes during the launch was the introduction of Tenor Peter O’Reilly who aside from bearing a striking resemblance to McCormack in his youth – skilfully performed some of McCormack’s repertoire accompanied by pianist Deardhla Brosnan. 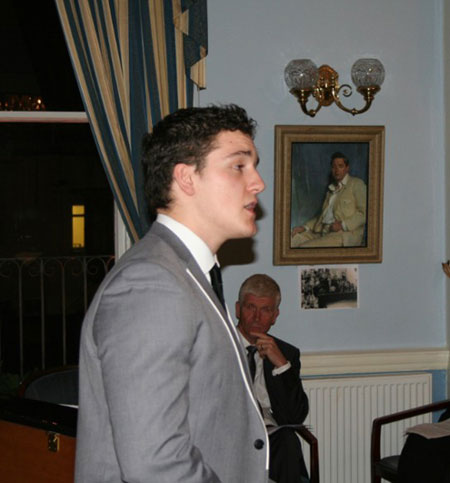 Peter O’Reilly performs on the night with the image of the great John McCormack in the background.

The actual launch and presentations were hosted by the Central Bank’s Director of Currency, Mr. Paul Molumby who spoke of the Bank’s pride at featuring McCormack and the department’s delight on how the coin had already surpassed their expectations both in the interest by the mainstream media and pre-sales by collectors. On the impressive design itself, Mr. Molumby commented “Count McCormack commands the stage in a characteristic pose – the design, through its imagery and typography has a nostalgic feel that pays tribute to his long musical career.”

For the many attending on the night, one of the highlights was meeting the Grandson of John Count McCormack, in fact, the current Count McCormack – also named John. His spoke of his memories of his Grandfather which were vivid and insightful and how the town of Athlone – the birthplace of McCormack still remember so fondly one of their most famous sons. At the end of Count McCormack’s comments, he was presented with the first strike of the collector coin by Director Molumby. 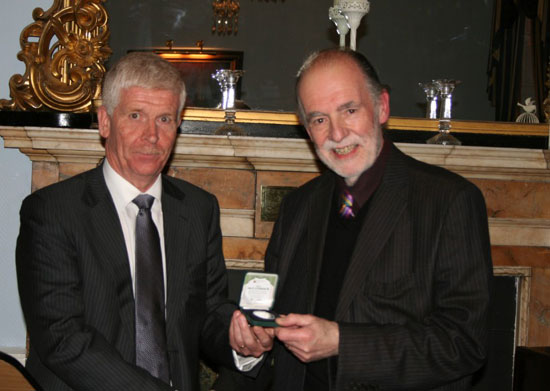 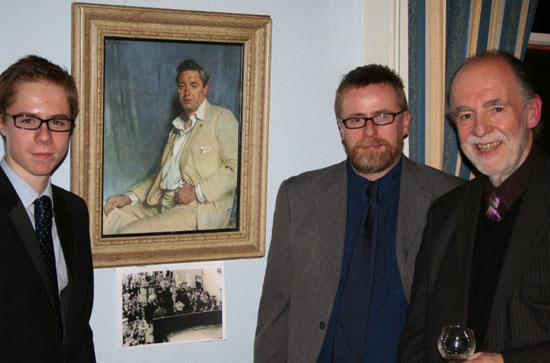 Image: Three Generations – Jonathan Tinne, his father Dirk and Count McCormack – Grandson of John McCormack stand next to his portrait.

Also attending the launch was the coins’ talented designer, Michael Guilfoyle, who has been responsible for some of the more striking collector coins issued by the Bank since the introduction of the Euro in 2002. He was called on to offer some of his comments on both the inspiration for the coin’s design as well as his approach to capturing the image of such an iconic figure in the field of Ireland’s musical heritage. Of Irish heritage himself, Guilfoyle spoke of his memories of hearing the recordings of McCormack as a child while listening to his grandparent’s old 78’s on a wind-up gramophone and re-iterated how important it was to include this very element in the overall design. Michael, at the end of his comments was presented with the second strike. 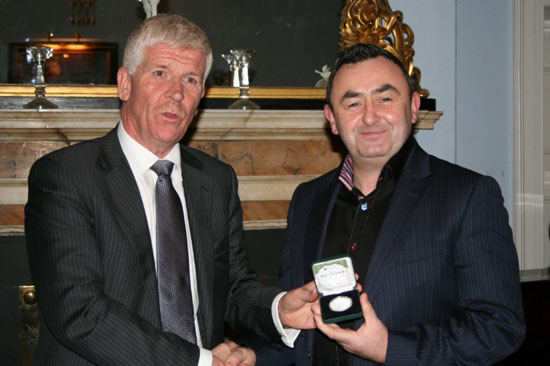 One of the more touching moments towards the end of the presentations was that Mary Elizabeth O’Brien – daughter-in-law of McCormack’s first teacher, Dr. Vincent O’Brien was also present and had herself contributed to behind-the-scenes preparations for the evening’s launch. Judging from Mr. Molumby’s kind words of appreciation from the Central Bank, he was pleased to present her with the coin’s third strike as a token of their esteem. 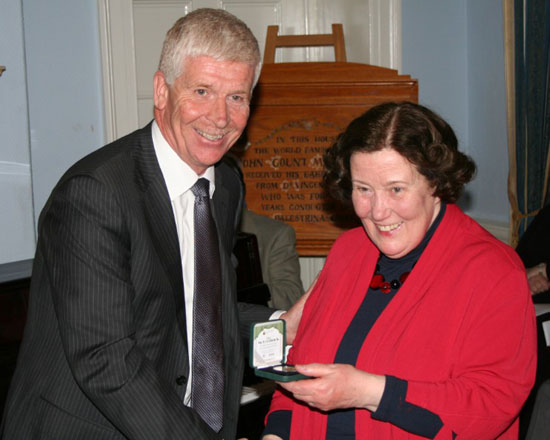 As John McCormack is still very fondly remembered not only in the whole of Ireland but especially in his hometown of Athlone – the town’s Mayor was also invited to take part in the evening’s event. Gabrielle McFadden, mayor and head of the town council took this opportunity to announce that plans are underway to re-name a square in the center of the city, in honor of its favorite son. Her announcement was received with applause not only from those in the audience but also from the immediate family of McCormack, both his Grandson and Granddaughter who seemed very moved by the proclamation. Mayor McFadden was herself presented with the fourth strike coin by Mr. Molumby to take back to the town council. 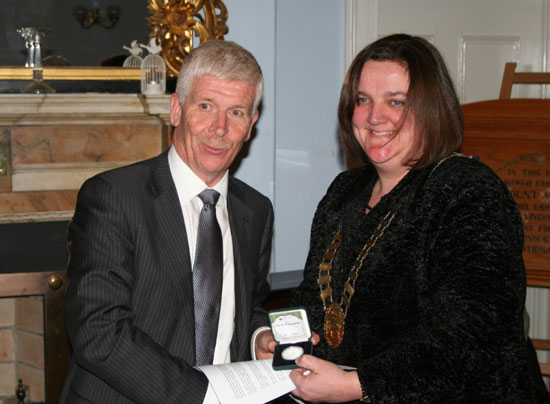 Image: The town of Athlone’s Mayor, Ms. Gabrielle McFadden receives the coin’s fourth strike on behalf of the town council.

Lastly, since the Teacher’s club have what is probably the most important collection of McCormack memorabilia outside his family, Mr. Molumby presented them and the club’s director Mr. McPhaidin with their latest addition – that of the fifth strike of the mintage. 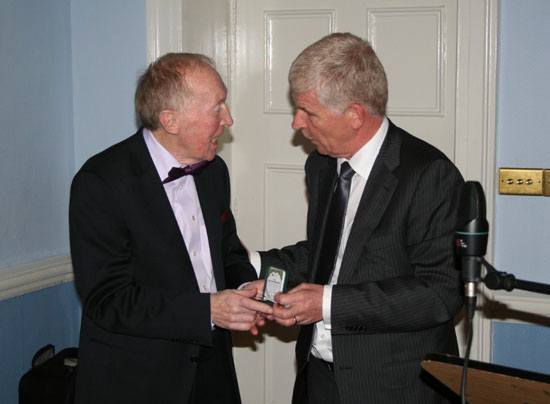 Image: Tadhg McPhailin, Director of the Teacher’s club in Dublin receives the fifth strike of the McCormack collector coin.

With the presentations concluded – we were treated for a second time by Peter O’Reilly’s renditions of some of the era’s more remembered songs and which were some of McCormack’s favorites and notable recordings.

During the reception, invited guests were given the opportunity to purchase examples of the coin being launched – the coins were officially issued and available on the 30th January and could be bought by stopping by the Central Bank’s main location on Dame Street in Dublin or by contacting the collector coins department for dispatch by post. 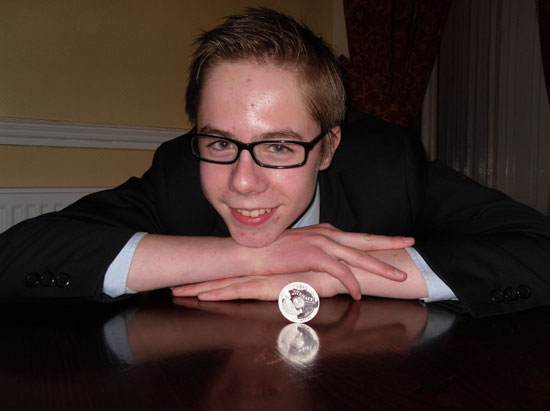 The management of the Collector coins department have advised that over 70% of the allotted mintage of 8000 coins has already been sold and that they anticipate the coin being sold out very shortly. The latest 2014 €10 coin is issued in conjunction with the EUROPA silver star programme whose theme this year is “European Musicians.” 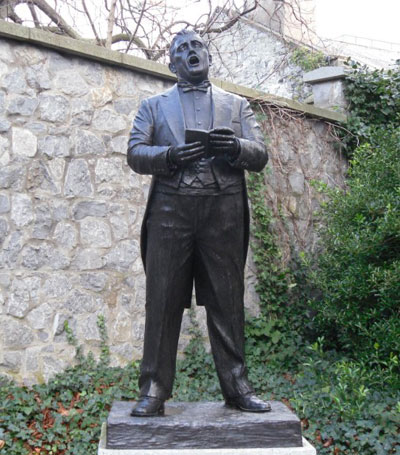 Image: The John McCormack memorial statue, located in Iveagh Gardens was dedicated in 2008.

For more information on this and other coins on offer by the Central Bank of Ireland, please visit their website at: http://www.centralbank.ie/paycurr/collector/Pages/Coinsets.aspx Information offered in English – international orders dispatched.