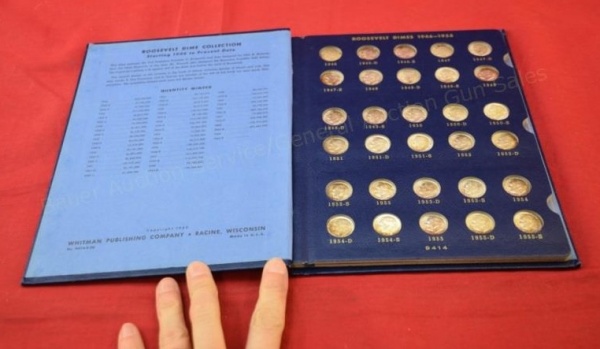 Coin collecting is a lot like gambling when you get lucky — as I did with this spectacular 1964 Roosevelt dime — won with a $27 bid in Capitol Coin Auction and which graded MS-67+, worth $750.

Here’s how it looked in the Proxibid auction: 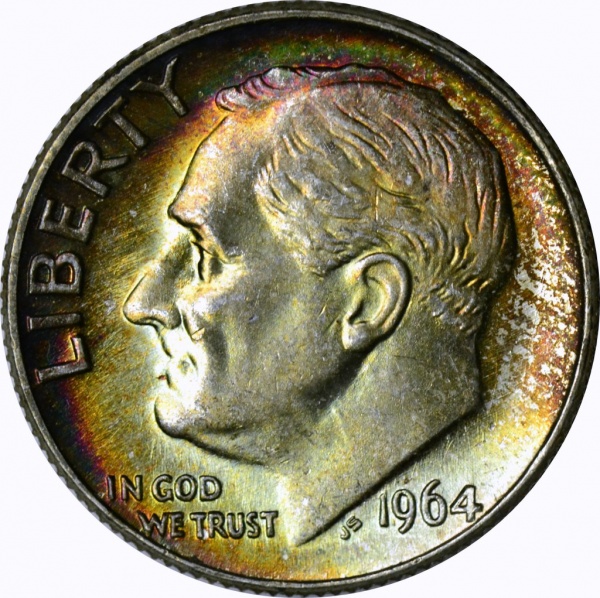 After that jackpot experience, I was intent on finding other high-grade Roosevelt dimes, believing I had the Midas-hobbyist touch.

The jury is still out on that, but suffice to say I am doubting myself based on recent third-party grading experiences.

Of course, I look for full bands (PCGS) and full torch (NGC), but mostly I look for toning.

The best places to find toned Roosevelt dimes are in albums and folders that often color in rainbow hues those older denomination silver years (1946-1964).

I discussed how to dismantle such an album in this Coin Update article. Here’s a photo of that album: I won the above album with a $110 bid, or $128 realized price with buyer’s fee. I thought the dimes were beautiful. Here are two: 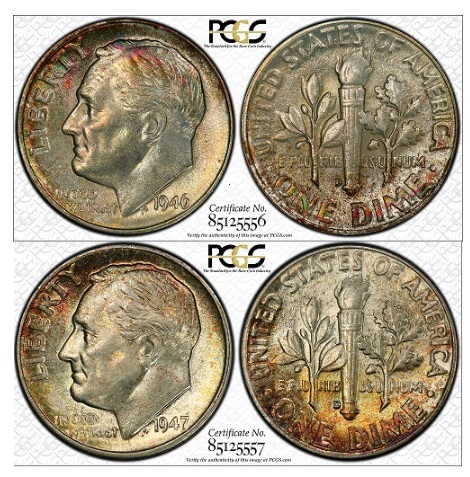 Those graded MS-62 and MS-63, along with other similar samples sent to PCGS. I disagreed with the grades, believing they were at least Gem (MS-65). Because I had invested in TrueView, any thought of resubmission would have been too costly.

In the end, I lost more than $180 after selling the low-grade dimes with TrueView and the rest of the album coins at silver melt.

In identifying dimes for submission, I routinely look to see if the hair on the obverse is clearly defined with no marks on the upper cheeks or in the fields. I also look at the bands on the reverse. PCGS designates full bands when the upper and lower horizontal bands on the torch are clearly defined. NGC requires this, in addition to the vertical bands being separated, earning “full torch” designation.


While full bands and full torch can bring big bucks when identified in certain years, the chief characteristic for me is luster, even when the surface involves a late-stage die with metal flow lines. In other words, I look for eye appeal, clean surfaces, colorful toning, and strong strike.

I have had no luck this past year, but I am still gambling.

I felt this dime from a recent dismantled album would surely grade well: 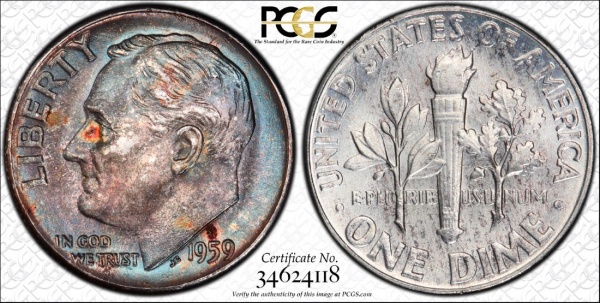 It did grade MS-66 but missed out on MS-67, which would have brought a $100-plus payday when consigned on eBay. This sold for $15.50, about $10 less than the cost of grading after paying seller fees.

As you can see, if you gamble on dimes, you stand to lose big-dime.

Here’s the deal with me as a hobbyist who spent years grading: If my calculations for Gem and Super Gem (MS-66 to 67) miss the mark again, I will quit cold turkey on submitting Roosevelt dimes in the future. Either my skills are suspect, third-party grading is haphazard, or both.

As always, I will report on the results. Meanwhile, share your Roosevelt dime viewpoints in the comment section below!

Why you should care about the notorious pin scratch