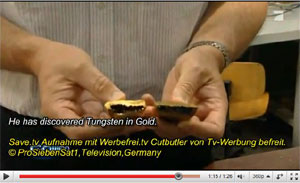 Recently, the German television station ProSieben ran a news story covering W. C. Heraeus in Hanau, Germany, the world’s largest privately owned refinery.  In the story, Wilfried Hörner, the head of the gold foundry, shows a 500 gram bar (16.0755 troy ounces) received from an unidentified bank.  The bar had the right physical dimensions to be an authentic gold bar, but one of the Heraeus employees suspected something funny.  After the bar was cut in half, you can see that the inside is tungsten, with only a coating of gold on the outside.

You can watch this news story on You Tube, where it was posted February 28, at http://www.youtube.com/watch?v=ZKczs-7BFRI.

Last fall, Rob Kirby of Kirby Analytics in Toronto reported that China’s central bank had discovered some 400-ounce gold-plated tungsten bars among those it had recently received from bonded warehouses.  It was later learned that at least four counterfeit bars were found and that all had come from sources in the United States.  As suspicions grow about counterfeit bars among those held in bonded warehouses for delivery against either COMEX or London Bullion Market Association contracts or shares of exchange traded funds, investors could panic.  So, you can understand that there has been almost a total blackout on news coverage on this story.

Tungsten is the only lower value metal that has a specific density close enough to gold to fabricate passable counterfeit pieces of the same size and weight as genuine coins and ingots.  Over the years, there have been a few isolated reports of smaller coins and bars found to have been drilled to remove some of the gold which was replaced with tungsten.  However, it is far more profitable to fabricate larger original bars of tungsten that are then gold-plated.

Thus far, the commodity exchanges have disclaimed of any responsibility for the purity of the gold bars they are delivering against contracts.  As stories of gold-plated tungsten bars in bonded warehouses continue to appear, I expect the commodity exchanges are going to be forced to modify their business practices to provide a guaranty of purity for any bars they deliver.

The process of non-destructive testing of bars to check for counterfeits involves very expensive equipment and is time consuming.  It is beyond the means of almost all investors and coin dealers.  For maximize safety, I recommend purchasing only smaller size coins and ingots, say two ounces of gold content or less, and only deal with a company that has a lengthy track record and in-house staff expertise (unlike the bank that took in this counterfeit 500 gram bar).  If you have purchased coins and ingots from unknown sources, you may want have them checked out by an experienced independent third party.

In contrast, the last things I would want to invest in are large gold bars stored in bonded warehouses in unallocated storage.  If it turns out that the warehouse holding your bars has too many counterfeit bars in their inventory, it could go bankrupt.  That would leave holders of unallocated inventory as unsecured creditors of the bankrupt company, and not as owners of gold.

Because the existence of counterfeit gold-plated tungsten bars could have such a huge impact on the financial markets, there is a huge potential for deception and misinformation to be passed around.  Be very careful about automatically believing any story you may hear.  For your own protection, it would be better to take physical possession of the smaller sizes of gold coins and bars now, and know that what you own genuine solid gold.