The Lafayette Dollar was one of several firsts. No only was it the first commemorative coin that was issued in the silver dollar denomination, it was the first coin ever to depict a former US president. The first coin meant for general circulation which shared that same feat would be the Lincoln Cent in 1909, almost a decade later. 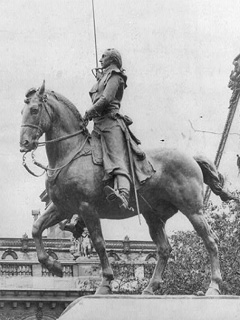 In a numismatic field that is flooded with half dollars, this silver dollar stands out to even the casual collector. It is one of the most distinctive silver dollars ever struck in this country, with a double portrait of Lafayette and Washington on the obverse and a model for a future statue of Lafayette on the reverse. This statue was the reason for the release of the coin, as its issuance was meant to raise money to erect a statue in Paris, where eventually (with a delay of eight years) a statue similar to the model on the reverse was unveiled in a place near the Louvre, where it stood for many years until moved to a location further up on the right bank of the Seine where it stands to this day.

Lafayette was born on September 6, 1757 in Auvergne, France, in the family’s 14th century castle as Marquis de La Fayette (abbreviated French spelling, his full name was much longer and is rarely used). Many different spellings of his name exist, with Lafayette most customary in the United States. The meaning of La Fayette is unclear, although some sources say that it might mean “have faith” or a variation thereof in an older spelling of French. In modern French “Foi” still means faith, so this explanation is certainly plausible.

After learning of the American Revolution, the young Lafayette quickly became involved in the cause. In early 1777, he decided to join the Americans and with some delay while trying to win more support he boarded a ship and arrived in the America’s after sailing for about 45 days. He received a commission as major-general (Lafayette had some military experience in France) and became a member of George Washington’s staff. Washington and Lafayette would remain very close friends for the rest of their lives.

Lafayette played an important role in the American War effort, while in the meantime trying to further increase ties been France and the United States. In 1779, less than two years after his arrival in the United States, he returned to France after upsetting some Americans in Boston for rejecting an attack against the British near Rhode Island. Wishing not the upset the Americans more, he decided it would be best to go back to France, where he was received graciously, although the first two weeks after his arrival were spent in a Paris Jail for disobeying the French King. During his time in France, he worked closely with Benjamin Franklin’s son in order to receive reinforcements to take back to the United States, as Lafayette was planning to return as soon as possible. At the same time he learned that his wife had borne him a son, who was named after George Washington, further indicating the close ties of the two Generals.

Lafayette returned to the United States with reinforcements in mid-1780, staying about one and a half years and playing an important part in the final major battle of the War, the Siege of Yorktown. In December of 1781 Lafayette once again returned to France, and during the next years he would play an extremely important role in securing trade agreements with the France. These trade agreements would be vital for the young United States which if it hadn’t been for France would have bankrupted itself in the first few years of its existence. During the next decade he played an extremely important part in the French revolution, using the skills he acquired during the American Revolutionary War to the best of his advantage.

Lafayette returned to the United States in 1824 when he was approaching the age of fifty, in which he visited all of the 24 American States at the time, having been personally invited by President Monroe. Lafayette gladly accepted, and during a yearlong tour of his second country (he had been granted citizenship of the United States) visited many of the old battle sites as well as several towns named after him. He returned to France after the tour, where he would die at the age of 76 in 1834. To this day many towns, streets and parks are named after the General, paying tribute to both him as well as the French support during the time of the Revolutionary War. 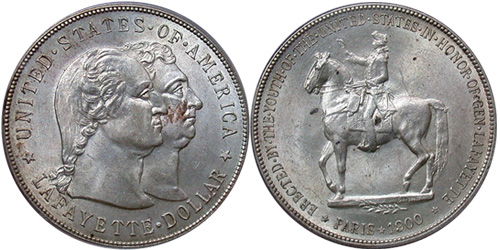 The Lafayette Silver Dollar was struck in 1899, with the pieces being sold for $2 a piece the following year. In 1908 the aforementioned statue was erected, which was mostly funded by the extra dollar that was made from the sale of the commemorative coins. The statue is one of several honoring Lafayette in Paris, with the statue of Washington and Lafayette that was appropriately erected in 1895 on Place des États-Unis (United States Plaza) in Paris, one of the more famous statues. Another famous statue stood in the French city of Metz, showing Lafayette in action, but it was destroyed by the Germans during World War II. Only recently has this particular statue been replaced by a modern copy, showing the French General in action on his horse, a distinctive but appropriate appearance.

While the commemorative dollar was meant to raise money, it also has given us an historical coin honoring two men who both fought for the same cause, despite their two completely different backgrounds. The coin reminds us of a turbulent time, and with the statue in Paris we have something tangible that can still be related to every single Lafayette Dollar that is presently on the market. Like virtually all commemoratives, the history of the coins as well as the subject can be fascinating and is worth studying, as it can teach us a lot of our history.