140.000 euros for a Chinese dollar from 1896, 110.000 euros for a gold coin from Czechoslovakia from 1938 – the spring sale of Künker was full of surprises! Less surprising was: the pre-sale estimate of 5.7 million euros was easily surpassed by the hammer price amounting to 8.75 million euros.

The most remarkable result of day one was obtained by a 5 ducat piece from Czechoslovakia from 1938 of which just 56 specimens were produced. Its obverse shows the national coat of arms as well as a lime tree branch, on the reverse Saint Wenceslas with the lettering Hedej Zahynouti Nam i Budoucim (Do not let us or our descendants perish). Its pre-sale estimate had been 10,000 euros, and it can be found for 30,000 euros in the latest World Coin Catalog written by Schön. That the two prices are totally out of date is evidenced by the hammer price: 110,000 euros!

The impressive results obtained by other gold coins, like the gold medal of Rudolf II on the seizure of the fortress of Gran in 1595, somewhat took the back seat. The good very fine piece rose from its estimate of 3,000 euros to 15,000 euros hammer price. Even higher was the price obtained by a Saxon 12 ducat piece from 1678 on the conferral of the Order of the Garter. The extremely fine rarity yielded 26,000 euros (estimate: 10,000 euros).

A collector was willing to pay 55,000 euros for the rare 20 mark piece from 1875 of Henry XXII of the Elder Line of Reuss. It therewith became the most expensive coin of the section German Empire.

Auction sale 246 – Coins and medals from medieval to modern times

An even higher total result with more remarkable hammer prices was achieved by the Chinese collection. The total results added up to three times the original estimate.

The top seller was a dollar from Pei-Yang Province, graded MS 62 by NGC – which corresponds to the European grading extremely fine to mint state and that made the piece, rare as it is already, even rarer. The dollar from 1896 came with a rather modest estimate of 15,000 euros to rise to incredible 140,000 euros in the end!

Equally surprising at least was the result of a set of commemorative coins of The People’s Republic of China from 1990, ‘Dragon and Phoenix’. The material value had already been about 22,000 euros but the estimate of 30,000 was exceeded by far by the hammer price amounting to 80,000 euros which evidences that the Chinese people cherish their present coins just like their ancient ones. 38,000 euros still were obtained by a pattern of a dollar from Fengtien Province that was being produced by Schuler Company in 1897 and never issued (EF, 5,000 euros / 38,000 euros).

Comparatively modest were the results of the important Mansfeld Collection that was auctioned off on 12 March 2014. The most expensive coin was an extremely rare and extremely fine reichsthaler from 1710, minted in Eisleben on the death of John George III (3,000 euros / 11,000 euros).

Auction sale 247 – 500 Years of history and art as reflected in the medal. The Georg Baums Collection

Another highlight of the spring auction was the Baums Collection that was offered for sale on 13 March 2014. The collector had assembled a number of intriguing pieces that attracted wide interest. Whereas the pre-sale estimate had been 1.3 million euros, the hammer prices reached the total of 1.8 million euros. Telling examples for the high hammer prices are the gorgeous, about extremely fine gold medal of the city of Danzig in the weight of 16 ducats from 1646 on the wedding of Wladyslaw IV with Marie Louise Gonzaga (20,000 euros / 42,000 euros) or a perfect Russian silver medal of Peter the Great on the Treaty of Nystad that probably was made in later times, during the 19th century, using the dies from 1721 (2,500 euros / 11,000 euros). As it was expected, the most expensive item of the Baums Collection was the magnificent Trinity Medal by Hans Reinhart (40,000 euros / 46,000 euros). 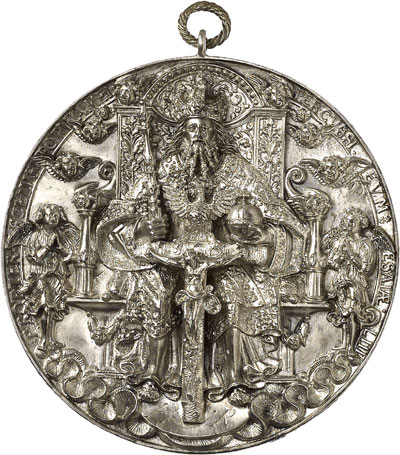 Collectors were given the opportunity to place their bid in the lower price regions as well. Many pieces ranged in the two- and three-figure regions, like for example a very interesting gilded bronze medal on philosopher and writer Jean-Jacques Rousseau. It came with an estimate of 75 euros but changed hands in the end for just 60 euros!

Friday was entirely devoted to ancient coins. Some very good results were to be witnessed with Greek coins. A very rare tetradrachm from Akragas with the two eagles gorging a hare had been estimated at 25,000 euros, to achieve a hammer price of 32,000 euros. Two dekadrachms from Syracuse were available for sale, the first – signed by Euainetos, preserved better than very fine – obtained 20,000 euros (12,500 euros), the second one – without signature – 16,000 euros (10,000 euros).

All results can be found on the website of Künker at www.kuenker.de

There you will also find a list of unsold lots available for sale at 80 % of their estimate.