The Bank of Korea have issued three coins which continue the hugely successful and popular UNESCO cultural heritage series highlighting the many historic locations and revered landmarks within the Republic of Korea and included on the UNESCO world heritage list. This year’s issue includes three coins as last year but with a slight difference – the set includes round, square and triangular coins – with both the square and triangular strikes being a “first” for the Bank of Korea.

The three sites chosen this year all have a theme of Historic Villages of Korea which include Hahoe and Yangdong, Haeinsa Temple Janggyeong Panjeon (the Depositories for the Tripitaka Koreana Woodblocks), and Namhansanseong which are all listed as UNESCO World Heritage sites. This year’s series incorporates specific shapes for the three various sites chosen – a circular, square, and triangular shape, in an effort to emphasize the unique characteristics of three individual sites. The round shape symbolizes the characteristics of country village community culture that Hahoe village in Andong and Yangdong village in Gyeongju possess. The square shape embodies the shapes of Haeinsa Temple Janggyeong Panjeon and Janggyeong Pan. The triangular shape illustrates the fortress of Namhansanseong and a mountain.

1) Hahoe and Yangdong: The obverse depicts the panoramic view of Hahoe village, which grew up along an S-shaped river. The reverse illustrates the harmony between tile-roofed houses and thatched houses of Yangdong Village, which is on a mountain slope. 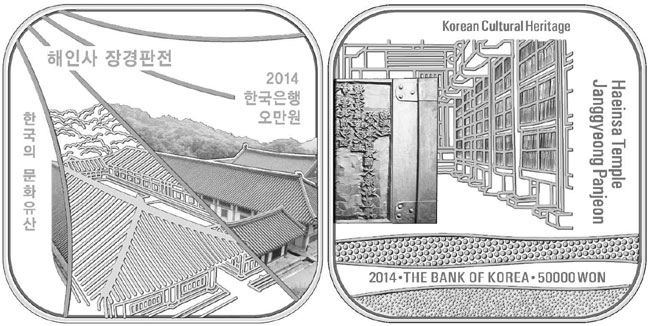 2) Haeinsa Temple Janggyeong Panjeon: The obverse shows a frontal panoramic view of Janggyeong Panjeon along with the surrounding forest and illustration of the cooling and drying breeze to express the architectural beauty of the Panjeon and the wisdom in its utilization of a natural environment. The reverse illustrates the inside of the Panjeon and the three-dimensional cross-section of its floor, which is composed of materials such as salt, charcoal and clay for humidity control, thus emphasizing the brilliance of the conservation science involved.

3) Namhansanseong: The obverse depicts a front-facing view of the East Gate of Namhansanseong and the fortress is engraved to express the excellent military architecture and elegant curvature of the fortress. The reverse shows a drawing of Namhansanseong (assumed to have been made at the end of the 18th century) from an old atlas of the country (kept at Yeungnam University) is shown to display the original look of the area within the walls.

There are a total of 11 UNESCO World Heritage sites in Korea. Five of them have been depicted on commemorative coins in previous years. The Jongmyo Shrine in 2010, Jeju Volcanic Island and Lava Tubes in 2011, Seokguram Grotto and Bulguksa Temple in 2012 and the Changdeokgung Palace Complex and Hwaseong Fortress in 2013. The remaining three sites of the Gyeongju Historic Areas which include Gochang, Hwasun and Ganghwa Dolmen Sites and the Royal Tombs of the Joseon Dynasty will be issued in 2015.

A total of 15,000 sets have been produced with the remaining 5000 coins from each issue being sold as individual items. The Bank of Korea will release the coins to the Korea Minting and Security Printing Corporation (KOMSCO) from the 18th November and authorize the sale of the coins through their distribution and sales outlets.