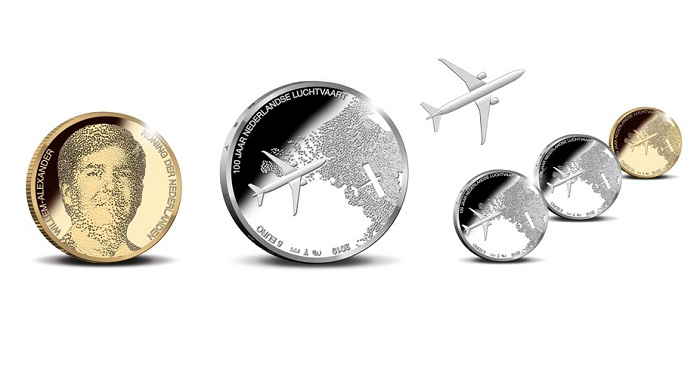 Amsterdam, Netherlands — For the centenary celebrations of Dutch aviation, KLM (the national airline of the Netherlands), NLR (Dutch Aerospace Center), and GKN Fokker Technologies — the successors of the civil aviation manufacturers founded originally in 1919 — hosted an event on Thursday, 14th March to mark this important anniversary.

The coin designs were approved as the artist Marijke van Warmerdam interpreted the regulation with a slight difference. According to her, the design she submitted is the same but with a slight difference — the diameters of the coins vary according to their denomination and specifications in terms of the silver five-euro. The positions of the new model airplane depicted flying overhead, as well as the shadow the historic model airplane cast on the ground, change position slightly. The obverse side includes an abstract-designed front-facing portrait of the king, along with his name and title encircling the effigy.

After a presentation and tour of the displays by various Dutch companies which are prominent in both civil and military aerospace technology, the king briefly took part in a virtual-reality flight presentation. With the presentation concluded, Willem Alexander was invited by the Royal Dutch Mint to strike the gold coin which would be produced on a minting press that is part of the mint’s collection of vintage minting presses. This press was brought to the EYE Museum the night before for this special event.

Assisted by a Royal Dutch Mint technician, the king was accompanied by Mr. Vincent Van Hecke, CEO of the Royal Dutch Mint, Mr. Menno Snel, State Secretary of Finance, and the Royal Dutch Mint’s mintmaster, Stephan Satijn. His Majesty was briefly instructed on how to swing the arm of the minting press that would result in the coin’s production. With a forceful push of the apparatus, the coin was struck and then handed to the king for his inspection, along with Mr. Menno Snel, who officially presented the coin to Willem Alexander. After the initial inspection, the king seemed quite satisfied with his efforts and held up the result of his minting efforts to the media in attendance.

Another treat for invited guests was a scheduled flight of both historic Royal Dutch air force models, a KLM passenger airplane and escorts of the latest Royal Air Force jet fighters. Despite the very blustery weather on the day with strong wind gusts and rain, the king and guests braved the elements and viewed the flight on the balcony of the EYE Museum overlooking a waterway which flew over the centre of Amsterdam.

The king is well-known to be especially interested in aviation. In 1985, at the age of 21, and as prince of Orange, Willem Alexander studied for and obtained his private pilot’s license, second class. He further went on to obtain a commercial pilot’s license in 1987. Two years later, the prince of Orange obtained a supplementary licence to fly multi-engine jet aircraft. Aside from these qualifications, he also has his military pilot’s licence, which was presented to him by his grandfather Prince Bernhard in 1994.


Along with his duties in support to his mother, the former queen now-Princess Beatrix, he earned his airline transport pilot licence in 2001. What is not readily known by the flying public in the Netherlands is that if you’re a passenger on one of KLM’s flights, your airplane might, in fact, be piloted by the king. He revealed in 2017 his “double-life” as a commercial pilot since he occasionally flies as a guest pilot for KLM Cityhopper in order to keep in practice. Willem-Alexander once commented in an interview that had he not been born a prince of the Netherlands, his dream would have been to fly big passenger planes such as a Boeing 747. On the 30th April 2013, the prince of Orange succeeded his mother as the country’s king on the occasion of her abdication, becoming the country’s seventh monarch of the modern Kingdom of the Netherlands. He is the country’s first king in 123 years, since the Netherlands is the only country in the world to have had three successive queens regnant since 1890.