Morgan Dollars are arguably the most popular of all United States coin series. Struck from 1878 to 1904 and in 1921, the coins are associated with the adventurous times of the Wild West, of figures like Billy the Kid and Buffalo Bill. The reality is a little far away from that, as millions were stored in treasury vaults around the country until their eventual release in the 1960’s, but the stories all coin collectors have heard carry a much nicer ring. The series, which was struck at a total of five Mints (although not each Mint struck Silver Dollars in each year the design was in production), is filled with rarities and interesting coins that will appeal to novice and experienced collectors alike. In this article we will take a look at some of the well-known key dates, condition rarities, and just plain interesting coins of that fabled Morgan Silver Dollar series.

The 1884-S Morgan Dollar is a very interesting issue and the prime condition rarity of the series. In the absolute sense, it can hardly considered a scarce coin, as its mintage of 3,200,000 coins is not all that low. Coins in grades up to the XF level are regularly encountered, and AU’s are merely scarce. In uncirculated condition, however, the story changes radically. Virtually the entire mintage was released into circulation and since numismatists at the time were not focused on mintmarks, they settled for the much more common Philadelphia (Proof) issue and did not pursue the San Francisco coin. As a result the coin is a major rarity in uncirculated condition, jumping in price exponentially in grades above MS-60. Most uncirculated survivors show heavy bagmarks and lack eye-appeal, and even pieces grading MS-64 are a major rarity. In gem uncirculated condition this is simply put one of the rarest coins of the series, encountered less frequently than the some of the other key-dates with lower mintages.

The Carson City Mint, associated with scarce coins, produced a relatively large number of Morgan Silver Dollars, relatively few of which actually circulated, and dates such as the 1883-CC and 1884-CC are readily available in uncirculated condition. Of the thirteen Carson City Morgan Silver Dollars, the 1889-CC is by far the rarest, and it is considered to be one of the classic key-dates of the series. A mere 350,000 pieces were produced, few of which were saved, and most pieces show evidence of circulation. Uncirculated pieces are rare and gems even more so, with very few coins having actually been graded at that level. The issue has always been popular for its low-mintage and the fact that it was struck at the Carson City Mint, and even well-circulated and impaired pieces are in demand. 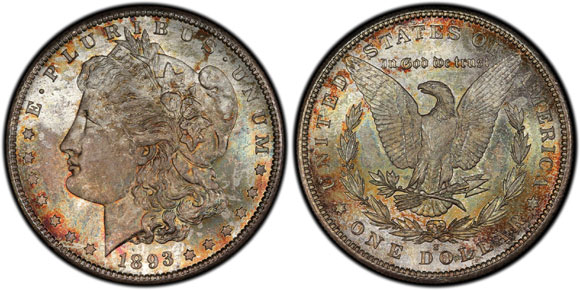 Ask any collector what the absolute key-date of the Morgan Silver Dollar series is and the 1893-S will always be mentioned. This issue represents lowest mintage circulation strike of the series, with a mere 100,000 pieces produced. Most pieces are encountered at the mid circulated grade level (VF or so) as numismatists in the early 20th century noticed the low mintage and pulled many coins out of circulation. By then, however, most had been around for a while and uncirculated coins were very rare. It is believed that only a few dozen true uncirculated pieces actually exist, and most do so in the lower mint state ranges. There are also other scarce dates in the 1890’s from the other mints, as demand for the silver dollar denomination was very low in this period and by then the treasury had plenty in storage. The coins struck at the San Francisco Mint tended to circulate more extensively due to the distrust that many people of the Western States had in paper money, and coins such as the 1893-S circulated quite heavily in places such as California and Nevada.

The 1895 is a very curious issue and a mystery that has never been clarified. Records indicate that a total of 12,000 coins were struck for circulation, but not a single circulation-strike 1895 Morgan Dollar has ever been found. All 1895 Morgan Dollars available are proofs from a total mintage of 880 coins, although some circulated pieces do exist, which are classified as circulated Proofs. While the Proof mintage of this year was not low in the context of the series, demand is extraordinarily high and the 1895 Morgan Silver Dollar leading to a sharp premium. Like other Proofs of the series, hairlines tend to be a problem and finding a gem Proof 1895 Morgan Silver Dollar is difficult.

Besides the Proof-only 1895, there is another Philadelphia date that is very difficult, the 1901. When the 1895 is considered a true Proof-only issue, the 1901 is by far the scarcest Philadelphia issue of the series and certainly a key-date. A total of 6,592,000 pieces were struck for circulation and it shares a very similar story to the 1884-S: the majority of pieces were released into circulation and uncirculated examples are rare. If any bags were saved at the time, it is very likely that they were later melted and that the public never had the chance to purchase those coins, drastically reducing the surviving population. Even though this coin does not have the low-mintage nor sexy mint appeal it remains a rare and very difficult coin. 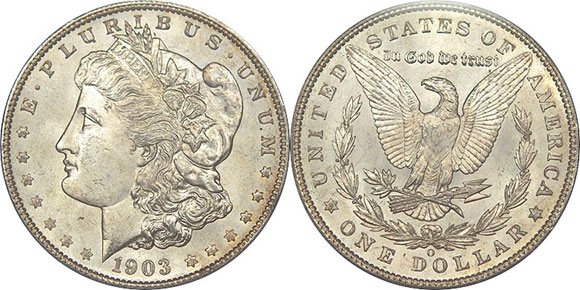 The 1903-O is another curious issue. Up to the early 1960’s it was considered to be one of the prime key-dates of the series as very few people had seen or even heard rumors of people seeing one. The issue was priced in the coin catalogs but since very few traded it could hardly have been considered accurate. Then, in the early 1960’s, hundreds of thousands of Morgan Silver Dollars saved since their time of minting were discovered in treasury vaults. Among these were bags and bags of the once rare 1903-O. Overnight the price plummeted and now the coin is only considered a scarce issue with a mintage of 4,450,000 pieces. Most that survive do so in uncirculated condition and can most likely be traced back to the treasury hoards. Circulated examples are downright rare. While the coin still trades for a premium over other dates with similar mintages it can hardly be considered a rare coin, even at the gem level. Certainly a difference from a little over half a century ago!

These are just a few highlights and rarities of the series. Depending on grade there are others, and there are also a few well-known varieties that are worth a healthy premium. Coins from the Carson City Mint, as previously mentioned, are always in demand. Some of the other issues from the 1890’s, such as the 1893-CC, 1894, 1895-S and 1896-S are very scarce and infrequently encountered in gem uncirculated condition. Many issues were saved in large quantities in uncirculated condition but rarely circulated at the time of issue, making them difficult to find in problem-free circulated condition and a true challenge for the collector of such coins.

Popular varieties include the 1879-CC “Capped Die”, which featured a rusted mintmark, the 1888-O Doubled Die Obverse (also known as the “hot lips” as Liberty on the obverse appears to have two sets of lips) and the 1900-O/CC, which featured numerous reverse dies which initially had the CC mintmark punched into the die but when that mint ceased operations an O mintmark for New Orleans was punched into the die instead, showing remnants of the original CC mintmark. All of these are highly collectable, as are many both major and minor varieties.