The Mercury Dime was introduced in 1916 after the Barber Dime had been in production since 1892 and had long been unpopular. Like the other denominations redesigned in this time period, it was felt that the dime should better reflect the artistry of the time. Adolph Weinman came up with a design which would be struck until the end of World War II in 1945, when it was replaced by the Roosevelt Dime. By then, however, it had left a lasting impression on the minds of the American people, and albums of Mercury Dimes were filled up around the country straight from circulation. While picking the coins up from circulation is extremely rare these days, the series remains popular with both novice as well as experienced collectors. This article will briefly discuss the key-dates and semi-key dates that will be most difficult for collectors to find. 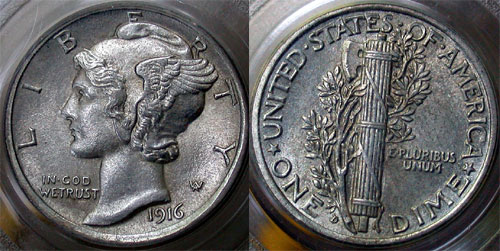 The 1916-D is considered to be the key-date of the Mercury Dime series. This first year of issue had a mintage of just 264,000 pieces, by far the lowest of the series. One might attribute this to a high-mintage of the previous design, but no Barber Dimes were struck at the Denver Mint in 1916 (they were at the Philadelphia and San Francisco Mint), so there is no apparent reason for its low mintage. Most likely it was just that the Mint was concentrating on other denominations at the time (a record number of quarters were struck at the Denver Mint in 1916, for instance). No matter the true reason for the low mintage, the 1916-D Mercury Dime is one of the classic key dates of the 20th century and a very scarce coin in all grades, with most examples surviving in well-circulated condition. Uncirculated pieces are very scarce, although some high-grade examples in gem condition with full strike the coin did manage to survive.

Mintages of all smaller silver denominations dropped considerably in the early 1920s, and the 1921 dime is now considered to be one of the semi key-dates in the series, with a total mintage of 1,230,000 pieces. Luckily enough, plenty of pieces have survived in all grades, as the low-mintage was soon noticed by collectors who picked the coins out of circulation before the Great Depression. In uncirculated condition, however, the 1921 Mercury dime is pretty difficult to find, although most do come well struck and are generally pretty nice.

Like the Philadelphia coin of the same year, the 1921-D Mercury Dime struck at the Denver Mint is a low-mintage issue with a total output of 1,080,000 pieces, representing the second lowest of the series. This issue is slightly scarcer than the Philadelphia issue, although the difference is minimal, especially in circulated condition. Like the 1921, this date generally comes well struck although luster is often subdued a little bit, common with dimes of this era regardless of the Mint that struck them. No dimes were struck at any Mint in 1922 and the Denver Mint would not strike its next Mercury Dime until 1924.

The 1926-S Mercury Dime follows the same story as the Lincoln Cent and Buffalo Nickel of the same date. The mintage was reasonably low, at 1,520,000 pieces, and quality is average although many do come weakly struck. Virtually all pieces, however, were released into circulation and uncirculated examples are difficult to find nice. Strike is a problem although not as much as some of the other San Francisco minted dimes from the era, such as the 1919-S and 1924-S which are almost impossible to find in gem uncirculated condition with a full strike on the reverse. 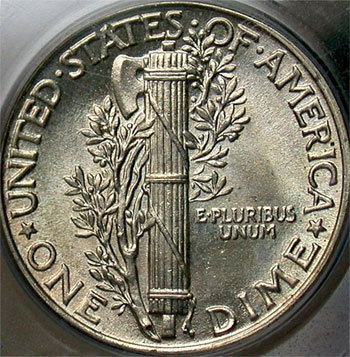 These are just a few issues of the series that the collector will find more difficult to find regardless of condition. Mercury Dimes are generally graded on a numerical scale (as other American coins) but are also judged by the horizontal bands on the fasces visible on the reverse. Pieces where the horizontal line is fully struck on all three bands are designated as having “Full Bands” (abbreviated as FB or FSB for “Full Split Bands”) can be extremely scarce for some dates.