The Lincoln Wheat Cent series, struck from 1909 to 1958, is an extremely popular series to collect. It often is the first set put together by novice collectors, and many experienced collectors love this set as well. A complete set of 144 coins is feasible in circulated grades, but becomes difficult in the higher grades and is surprisingly difficult in gem uncirculated condition with original Mint red color. This article will take a look at the key dates and semi-key dates of this series, such as the famous 1909-S VDB and 1914-D Lincoln Cents, as well as some of the other more difficult issues. 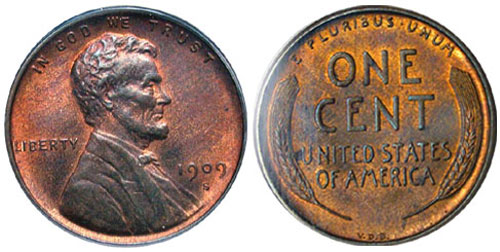 The first key date is one of the most famous and popular cents ever struck by the United States Mint, popular from the day it was first struck, and the subject of many childhood dreams. Struck at the San Francisco Mint, this first year of issue Lincoln Cent featured the initials of the designer, “V.D.B.” (for Victor David Brenner) on the bottom of the reverse. Since the initials were considered be too prominent by some people, the Mint quickly acted by removing them from the reverse. By then, the Philadelphia Mint had already struck almost 28 million of the new 1909 VDB Lincoln Cents, but the output at the San Francisco Mint was much smaller, with only 484,000 pieces struck for circulation. The coins quickly became popular and many were withdrawn from circulation by collectors. Other did circulate for years before being noticed, but by then the coin was already in great demand. Without a doubt, the 1909-S VDB is an extremely popular coin because of its (relatively) low mintage and high demand. 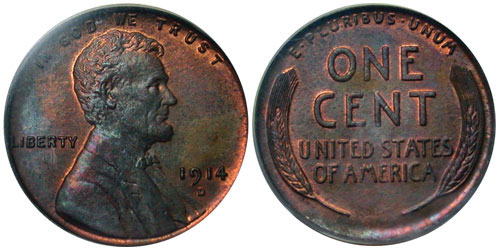 The 1914-D is another low-mintage coin within the series, with a mintage of 1,193,000 pieces. The difference between this coin and the 1909-S VDB is that very few pieces were saved by collectors, as the number of collectors assembling sets of Lincoln Cents by date and mintmark was small in the teens. As a result the 1914-D is often encountered in low grade but is an extremely difficult coin to find in uncirculated condition, with prices fueled by high demand. Only about one out of every ten 1914-D Lincoln Cents submitted to the grading services received an uncirculated grade, and many of those that did are held in collections.

The 1924-D is a semi-key date with a low mintage of 2,520,000 pieces. While this might not seem as low as the previously discussed coins, one should remember that the Philadelphia Mint struck over 75 million Lincoln Cents in 1924, and San Francisco’s output was almost 12 million coins as well. The coin is not all that difficult to find in most grades, but is still priced higher in circulated condition the other dates from the 1920s, thanks to its low mintage. Yet, many people must have noticed the low-mintage as the date is not as scarce as otherwise might have been the case, and in uncirculated condition it is actually more affordable than higher mintage coins from the same decade, such as the 1923-S (which had a mintage of almost 9 million). However, when we look at coins struck at only the Denver Mint this is the scarcest Lincoln Wheat Cent in gem red uncirculated condition, even more difficult to find than the 1914-D (PCGS has graded 58 1914-D’s in MS-65RD, while only 37 1924-D pieces have been graded MS-65RD). Nonetheless, the 1914-D does sell for more money thanks to its status as a classic key date and subsequent higher demand.

The 1926-S is a curious coin. Mint records indicate that 4,550,000 pieces were struck, and the date is readily available in circulated grades (a Good or Very Good example will set you back less than ten dollars). In uncirculated condition, however, it becomes a major rarity. Many pieces of this date are weakly struck and are plain ugly. Pieces with full original mint red are extremely difficult to find and in fact, in MS-64RD, the 1926-S is priced higher than any other date in the series, including the 1909-S VDB and 1914-D. Even the finest collections of Lincoln Cents generally only include a Red-Brown example, although a limited number of full RD coins have been graded by PCGS and NGC. Without a doubt this coin is one of the classic condition rarities of the 20th century. 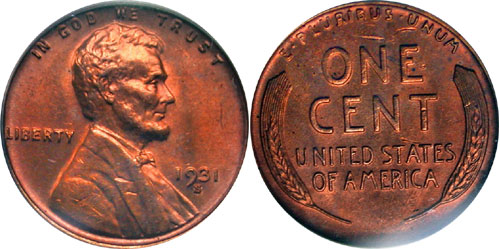 The 1931-S is another low-mintage coin that had a total output of 866,000 pieces, the only date of the series besides the 1909-S VDB that had a mintage of less than one million pieces. The great depression was still in full sling by 1931, and mintages of all denominations had dropped considerably compared to only a few years before. Luckily enough plenty were pulled out of circulation at some point, and the date is not that hard to find in circulated grades, although the low mintage does have an effect on price. Uncirculated examples can also be found without much trouble, although in the finest states of preservation the date can get pricey. The 1931-S is still a very popular semi key-date from later in the series.

These are some of the most-well known scarce dates in the Lincoln Wheat Cent series. There are also other issues which are much more difficult than might be indicated by the mintages, especially in higher uncirculated grades, where some high-mintage dates are harder to find and sell for higher prices than some of the dates discussed above. While completing a set of Lincoln Wheat Cents collectors will also encounter more difficult dates such as the San Francisco coins from 1909 to 1915, all of which had mintages in the neighborhood of 5 million coins. One should also note, as I have pointed out above, that scarcity is dramatically different whether you are putting together a set in circulated grades or in uncirculated condition, and when it comes to gem uncirculated coins there are quite a few dates which are only a few dollars in circulated condition that will cost you thousands of dollars in gem red uncirculated condition.