The Twenty Dollar Gold Piece or Double Eagle is one of the most historical and intriguing of all American coin issues. From its inception in 1849 to the final issue of the series in 1933, it was the largest regularly issued denomination of all United States coinage, and many Double Eagles are among the rarest of all American Gold Coinage. Two distinct types were used through the years that this denomination was struck, the Liberty Head design by James B. Longacre and the Saint-Gaudens design by the artist of that name. In this article we will take a look at the rarities within the first series, a complete date/mintmark set which would contain 143 examples of these massive gold coins. 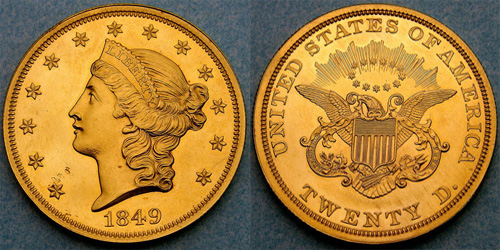 The 1849 Double Eagle is arguably one of the most famous of all American coins. Technically a pattern, it is represented by a single specimen permanently impounded in the Smithsonian Institution. A second piece has been rumored to exist but has never surfaced. Also, a copper impression was known to exist at the end of the 19th century but has not been seen since. Struck in Proof format, the coin features minute differences compared to the design released into circulation the next year.

The New Orleans Mint struck Double Eagles in the first year the denomination was struck (it was introduced as a result of the discovery of gold in California and the huge quantity of the yellow metal coming from the West Coast) and mintages up to 1853 were rather large as gold flowed to New Orleans, the Mint closest to California that was capable of striking Double Eagles. Then, in 1854 one of the rarities of the series was created, when the New Orleans Mint struck just 3,250 pieces of this denomination, the result of a United States Branch Mint having been opened in San Francisco. Of the original mintage approximately two to three dozen exist to this day, all of which are in circulated condition. This is one of the true key-dates of the series and auction records reflect this as well. One particularly high-end AU-55 sold for over $600,000 in 2008.

The New Orleans Mint struck 8,000 Double Eagles in 1855, creating a rare issue, but we go back into the very rare range with the 1856-O, of which just 2,250 coins were struck. This issue is slightly rare than the 1854-O, as estimates for the 1856-O generally are in the 20-30 coins known to exist. Once again virtually all are in circulated condition, but there is one coin that makes a notable difference between the dates. This is a fabulous example graded Specimen-63 by NGC a coin of which the pedigree goes back to the Superintendent of the New Orleans Mint in 1856, Charles Bienvenu. The coin is not only the absolutely finest known 1856-O Double Eagle in existence; it is also the highest quality New Orleans Double Eagle of the period. The coin has traded hands numerous times over the past decades, the last time selling in January 2009 for $1,437,500 at public auction. 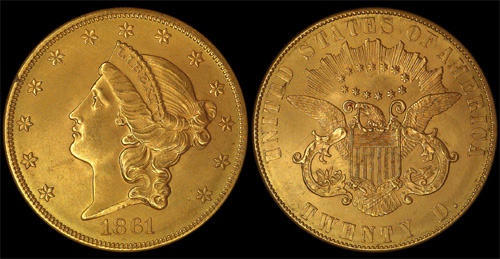 While the 1861 is not necessarily a rare date there is one variety that is widely considered to be the rarest Double Eagle in existence after the 1849, with just two examples known to exist. It is the so-called “Paquet” reverse, named after the modified reverse by Anthony C. Paquet. It features taller letters on the reverse and more space above the eagle’s head. The most notable difference is the larger field, narrowing the size of the rim, something which the Mint disapproved with almost immediately (it was believed the dies would break too easily) after the first coins were struck in early 1861. The mintage was recalled and melted, and the old reverse was put back into use. Mysteriously two examples were saved from the melting pot, creating a very rare variety. One of these is graded MS-61 by PCGS and sold for $1,610,000 in 2006, while the other is a far superior example (estimated MS-67) but has not been seen at auction since the late 1980’s. It must be noted that the San Francisco Mint also deployed the Paquet reverse for a brief time in 1861, but since their production was larger, the 1861-S with Paquet reverse is not as rare as the Philadelphia issue.

In 1866 the motto “IN GOD WE TRUST” was added to the reverse of the Double Eagle, above the eagle’s head, creating a new type. Before this happened, however, a limited number of examples were struck at the San Francisco Mint using the old reverse die, creating a rare variety that is very difficult to find. Even though records indicate that 120,000 pieces were struck it appears that many must have been melted shortly after being struck, and the issue is very difficult to find in any grade. Uncirculated pieces are virtually unknown to exist and less than 200 circulated pieces are believed to be extant.

The 1870-CC Double Eagle is one of the rarest of all double eagles. Struck in the first year of operations at the Carson City Mint a total of 3,789 were struck, but all of these were released into circulation and most were later melted or lost. About three dozen pieces are known to exist, of which only a few even reach the AU level. The average 1870-CC Double Eagle grades VF and is damaged or shows other signs of mishandling. Because of its status as the first year of issue from the fabled Carson City Mint this is a very popular coin but there are just not that many coins in the marketplace.

There are some surprisingly rare dates found in the Philadelphia issues of the 1880’s but the undisputed king of this decade is the 1882 issue. Only 571 coins were struck for circulation, with an additional 59 Proofs struck for collectors. While the issue is generally believed to be rarer than any of the others except for the 1861 Paquet, it doesn’t receive as much as attention, only because of its status as a “boring” Philadelphia date. Of course, when there’s only a few dozen coins in existence, it certainly does deserve attention. Uncirculated pieces are very rare, with the finest being a single MS-64 graded by PCGS, a stunning example not seen in the marketplace for many years.

These three years each have one thing in common: no business strikes were struck and the only pieces available to collectors are Proofs. Mintages are extremely low, with 92 Proofs produced in 1883, 71 Proofs in 1884 and 121 Proofs in 1887, and any such coin is a major rarity. While few specialists focus on Proof Double Eagles only, demand for any of these dates is high, and they do sell for higher prices than other Double Eagle Proofs with lower mintages.

These are just a few of the rarest of all Double Eagles, but there are certainly others. Dates such as the 1859-O, 1860-O, 1861-O, 1879-O, 1881, 1885, 1886 and 1891 are all very rare, with all the Carson City issues being scarce at the minimum. Some dates, despite having rarer mintages, are unknown to exist in uncirculated condition. There are also exceptions, such as the 1857-S, which is common in high-grade thanks to a large number of pieces having been recovered from the wreck of the S.S. Central America, many in pristine condition. Many of the later dates are considered common, but this does not mean that they are always available in the higher grades, as any MS-65 Double Eagle dated prior to 1900 is considered a rarity, and even those dated in the 20th century can not really be considered common.