Now a largely forgotten denomination, the gold dollar was introduced shortly after news of the gold discovery in California reached the east coast. Struck from 1849 to 1889, it is the smallest denomination produced by the United States Mint in gold. Made by all of the mints in use at the time, actual circulation of the pieces largely ended during and just after the American Civil War—except in the West, where the pieces continued to circulate until the 1880’s. With varying mintages, the 40 years in which it was produced created a number of rarities and scarce coins, as well as higher mintage issues that are still difficult to find. While most collectors are satisfied with a single type example of each of the three different designs, some have tried to assemble a complete date and mintmark set. As we will see, that is not an easy feat, as some dates are rarely encountered in the marketplace. 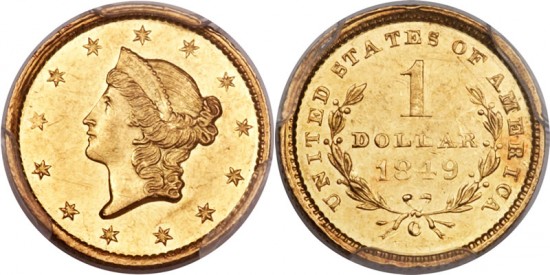 The prime rarity in the gold dollar series was struck during the first year of production at the Charlotte Branch Mint. The total mintage of 11,634 coins was divided among two different reverses, one with an open wreath and the other with a closed wreath. The difference can be seen in the spacing between the 1 in the denomination and the wreath. The closed wreath is a scarce coin but made up most of the mintage, while the open wreath is an extreme rarity with only five examples known to exist. There’s no conclusive explanation for why this particular variety is so rare. It appears that after the open wreath variety was struck, the superintendent at the Philadelphia Mint was unhappy with the appearance of the Charlotte coins, prompting the change to the closed wreath. The finest known example is an NGC MS-63PL, which sold for $690,000 in 2004. The other known examples are all circulated, with one graded by PCGS as AU-58, an NGC XF-45 and another raw XF example, and a single example graded Fine-12 by NGC. 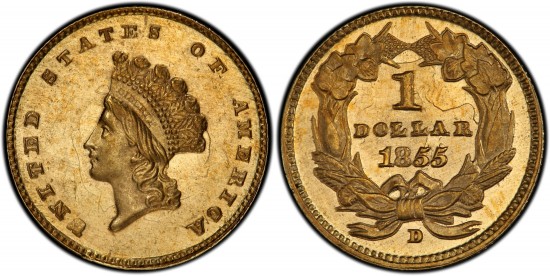 The earliest gold dollars measured a mere 13 millimeters in diameter; after they were issued it became apparent this was too small. To solve this, a second type was introduced in 1854, featuring the same amount of gold but slightly thinner, measuring 15 millimeters. This type was only produced for three years, as the strike was often weak and the head had to be enlarged to solve this problem. Of the type 2 gold dollars, the 1855-D is clearly the rarest, with a recorded mintage of only 1,811 pieces. This low mintage is not unusual for Dahlonega Gold Dollars of this era, as similarly low mintages are seen for the 1854-D and 1856-D issues. Rarely did the Dahlonega Mint produce more than 5,000 gold dollars in any given year. Most pieces are poorly struck and in uncirculated condition, with true uncirculated pieces being extremely rare. 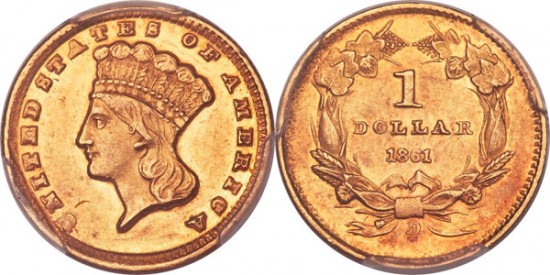 The 1861-D Gold Dollar was the last gold dollar produced by the Dahlonega Mint, as the facility closed shortly after the start of the American Civil War, when Confederate Troops came to occupy the Federal Mint building. In fact, the Confederate Army already had the Mint under their control when this issue was struck. This is the only such coin, making it a very interesting issue historically and highly prized. Mintage records were not kept in this turbulent period, but it is estimated that somewhere between 1,000 and 1,500 pieces were struck before the Mint ran out of planchets and had to cease production. All pieces are poorly produced, but a relatively high number of uncirculated pieces exist, suggesting that at least a few were kept from being spent. The finest known is a single coin graded MS-65 by NGC and which was later graded MS-64+ by PCGS. It sold for $149,500 in January of 2008. 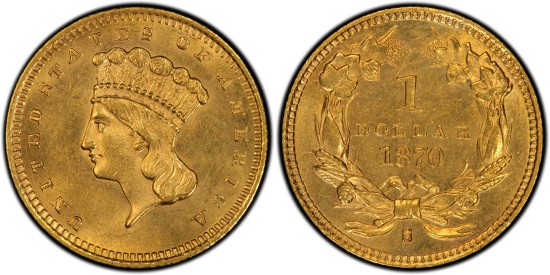 The 1870-S is a curious issue. It is the only Branch Mint Gold dollar produced after 1861, and the first San Francisco issue since 1860. The mintage of 3,000 is low, but not unusual among other gold dollars from the 1870’s and 1880’s. Its status as the final Branch Mint gold dollar makes it very popular, and it sells for a higher premium than other dates with similar mintages. While not particularly rare in uncirculated condition, true gems are very rare. The majority of examples grade at least AU, although a few circulated examples are also known to exist. Most circulated examples, however, will show evidence of having been set in jewelry, something that is rather common with later-date gold dollars. 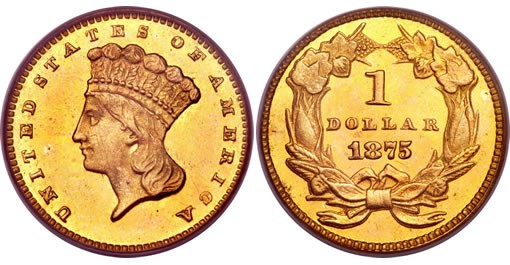 Mintages of later-date gold dollars struck at the Philadelphia Mint (which made all gold dollars after 1862 except for the 1870-S) are with few exceptions in the low thousands. One issue that stands out in this regard is the 1875 gold dollar. A mere 400 circulation strikes of this coin were produced, plus an additional 20 Proofs. The prior year, 1874, saw a mintage of 198,800 gold dollars, and demand must have been low the next year. In fact, it is likely that the Philadelphia Mint only produced circulation strikes to prevent the Proof coin from becoming a major rarity. Despite this, the 1875 gold dollar still has the lowest mintage of all coins of this denomination, and it is one of the rarest of all regularly issued U.S. gold coins. All known examples are Proof-like and virtually all are in uncirculated condition, though true gems are rare.

As previously mentioned, all Charlotte and Dahlonega issues are scarce-to-rare, with many having mintages in the low thousands. Practically all of the coins that came out of these two mints are poorly struck, and the gold dollars are no exception. The New Orleans Mint also produced a number of gold dollar issues, but these often had higher mintages than the other two southern Mints. The Philadelphia issues are generally available, although some of the later dates had mintages of below 5,000 coins, and some searching is required. While gold dollars are not as popular as some of the larger gold denominations, true rarities are always in demand, and the series provides excellent opportunity for the dedicated specialist with plenty of funds available.