The Barber Half Dollar series was introduced the same year as the dime and quarter with the same basic design, replacing the long-lived Liberty seated design in 1892. Of the three series with this design the half dollar is generally considered to be the most “doable” in all grades, with only a few dates which will set you back a bit over silver in the lowest grades. This, however, does not mean that the series can be completed in all grades in a matter of a few coin shows or a few nights of browsing the internet. Many pieces have been cleaned, damaged or otherwise impaired, and fully original pieces in Fine or better are not all that easy to find. Uncirculated pieces, especially at the gem level, are rare for all dates. This article will discuss some of the better known scarce or rare issues of the series, which ran until 1915.

The first issue we will take a look at is the 1893-S, of which 740,000 pieces were struck for circulation, which is where most of the pieces likely ended up. Unlike those struck during the first year of issue (1892) the 1893 issues were most likely saved in lesser numbers as souvenirs, making them now scarce coins not all that easily encountered. While it is not as rare as the famous silver dollar of the same date this is an issue which is pretty difficult in uncirculated condition and appears quite infrequently at that grade level. Circulated pieces are scarce as well but can generally be found with some searching.

Looking at mintage figures, the 1896-O usually does not pop out as a key-date or semi-key date as its mintage of 924,000 is not exceedingly low within the context of the series. In circulated condition it can even be considered to be relatively common and not even all that difficult to find. In uncirculated grades, however, this issue becomes a different story. It is a true condition-rarity that is the second rarest in uncirculated condition after the 1904-S (which we will discuss later). There were very few, if any collectors collecting by date and mintmark in the late 19th century, which resulted in most 1896-O half dollars released into circulation were they stayed for quite some time. The pieces that did survive in uncirculated condition did so by pure luck and now are encountered at auction quite infrequently. 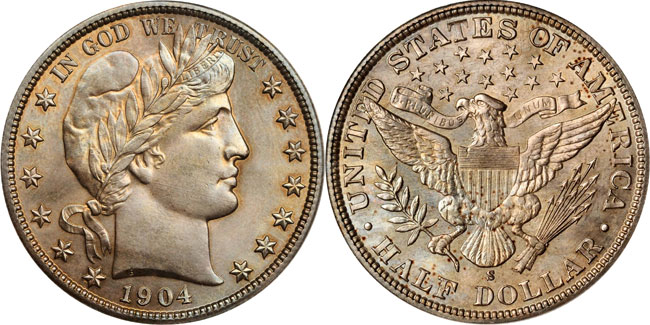 As mentioned above the 1904-S Barber Half Dollar is the rarest coin of the series to be found in uncirculated condition. 553,038 pieces were struck for circulation and it seems likely that virtually all were released into circulation shortly after their mintage. While encountered quite frequently in circulated grades very few survived in uncirculated condition, and at the gem uncirculated level this coin is among the scarcest 20th century half dollars regardless of series. One coin of this series that is worth mentioning individually is a wonderful PCGS MS-67 that sold for a record $138,000 at auction in 2010. Any nice, original uncirculated specimen of this issue will easily set you back a five figure sum, something which often comes as a surprise to beginning collectors who first research this interesting series.

The 1913 Barber Half Dollar is the first of a trio of Philadelphia minted half dollars that conclude the Barber Half Dollar series. Of these three the 1913 is the most available, although its mintage of 188,000 pieces can hardly be considered high. By 1913, however, there were some collectors that noticed the mintage and a number of pieces were most likely set aside for future generations of collectors. Circulated pieces at the VF and XF levels, however, were generally not set aside and continued to circulate for a number of years, making such pieces quite scarce in modern times.

The 1914 Barber Half Dollar is the second in a trio of three scarcer half dollars minted at the Philadelphia Mint and has the lowest mintage of the series with just 124,230 pieces produced for circulation plus a small number of Proofs produced for collectors. While not as rare as the mintage might suggest (once again because some were probably saved by collectors) the date is still very popular because of its low-mintage. Uncirculated specimens are relatively scarce and become rare at the gem uncirculated level, most likely because the pieces that were saved at the time were later mishandled and now no longer meet the standards of grading services to be graded at the gem uncirculated level.

The last Barber Half Dollar minted at the Philadelphia Mint is another low-mintage issue with a total of 138,000 pieces produced for circulation, the second-lowest of the series. This issue shares a very similar story as the previous Philadelphia issue, with well-circulated pieces surprisingly available for a coin with such a low-mintage but higher grade examples scarce and gem uncirculated specimens rare and infrequently encountered at auction.

These are just some of the scarcer Barber half dollars with many more rarities in the series, especially at the uncirculated level. Even though this might not be the most popular half dollar series to collect the series, like all Barber coinage, still has a strong following and pieces are sought after in all grades. A set of AG/Good coins remains relatively affordable and quite easy to put together, after which the collectors might choose to upgrade the set to higher grade coins, such as Fines or even VF/XF coins. These are much more difficult to find, as we have discussed above, and many specialized collectors have spent years looking for the right coins at these grade levels without even completing their sets. Certified sets are another popular way to collect this series, with some more advanced collectors trying to put together this set in uncirculated condition. One thing that we should note that is a major factor in collecting Barber coinage is that some common issues are extremely difficult to find at certain grade levels, while some low-mintage issues are relatively affordable. Without a doubt this makes all Barber series very interesting to collect and a series that’s definitely worth looking into.