Earlier this week, the United States Mint provided the release date and other details for the America the Beautiful Silver Bullion Coins. This new series will feature the designs of the circulating quarter series, struck in 5 ounces of .999 fine silver. 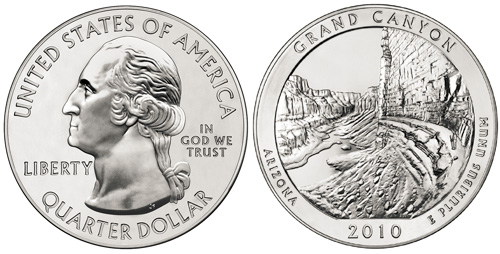 As a bullion series, the coins are distributed through the US Mint’s authorized purchaser (AP) network. The authorized purchaser system has been in place since the launch of the American Gold and Silver Eagle bullion programs in 1986. It was viewed as the most efficient  and effective method to distribute the coins and ensure that prices are competitive with bullion products produced by other world mints.

The authorized purchaser network starts with a small group of primary distributors who are able to purchase the coins directly from the Mint based on the market price of the metal plus a fixed (silver) or percentage (gold and platinum) mark up. It is the responsibility of these dealers to distribute the coins to the broader market and create a liquid market for United States bullion coins by both buying and selling.

For the present America the Beautiful Silver Bullion Coin Program, the premium paid by the Mint’s primary distributors was set at $9.75 per coin. This is a reasonable amount considering the premium for the one ounce American Silver Eagle is $2.00 per coin. The start of the new 5 ounce silver bullion coin series also required the purchase of a new coining press and other costs related to testing and development, which the Mint would need to recoup through the premiums.

The maximum mintage established by the US Mint for the first year of the series is 33,000 bullion coins for each of the five designs, for a total of 165,000 coins. Each primary distributor will have an allocation of 3,000 coins per design, for a total of 15,000 coins.

This total of 165,000 coins, or 825,000 ounces, is a relatively small amount compared to overall silver bullion sales. In the latest month, the US Mint sold more than 4.2 million ounces worth of American Silver Eagles.

Realizing the high demand for the new series and the limited quantity available, the US Mint urged their primary distributors to keep their prices at reasonable levels, stating in a memo:

The authorized purchasers (primary distributors) who are able to buy bullion coins directly from the US Mint include the following companies. (Note, this listing may be slightly out of date and includes only the US based dealers):

Not all of these companies deal in retail level transactions, but rather purchase the coins for resale to other bullion dealers and coin dealers in large quantity. At these subsequent levels of the distribution chain are where most consumers will purchase their bullion coins.

One of the primary distributors that does sell directly to the public has set prices at the equivalent of about $130 per coin above the market price of silver. As the first coins available for direct purchase from a primary source, perhaps this will establish the starting point for market prices, which may eventually spiral higher. But are prices nearly 90% above the price of silver “competitive with those charged for other bullion coins”?

The United States Mint plans to release numismatic versions of the 2010 America the Beautiful Silver Bullion Coins during the first quarter of 2011. Although the maximum mintages will be lower at 27,000 per design, as numismatic products they would be sold directly to the public at fixed prices established by the Mint.