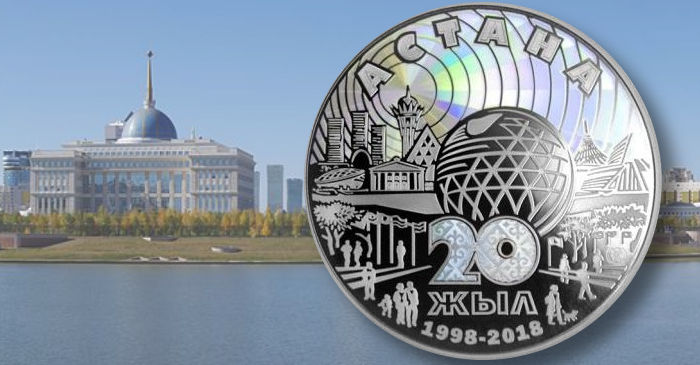 Background photo by Ken and Nyetta.

The National Bank of Kazakhstan has issued (20th June) new silver kilo coins in celebration of the 20th anniversary of the inauguration of the country’s capital city of Astana, which came into effect on the 6th May 1998. Originally a settlement named Akmoly (Russian: Akmolinsky prikaz), which is located on the banks of the Ishim River within the Aqmola Region, it served as a defensive fortification for Siberian Cossacks.

In 1832, the settlement was granted the status of a town and renamed Akmolinsk. On the 20th March 1961, the city was renamed Tselinograd to mark the city’s evolution as a cultural and administrative centre of the ”Virgin Lands Campaign.” This was a project initiated by General Secretary Nikita Khrushchev in 1953 to dramatically boost the Soviet Union’s agricultural production in order to alleviate the food shortages plaguing the Soviet population.

In 1992, and after independence, the city was once again renamed Aqmola, which was the modified original name meaning “white grave.” On the 10th December 1997, Aqmola replaced Almaty as the capital of Kazakhstan, which meant that the city would undergo a final name change. On the 6th May 1998, the city was inaugurated as Astana, which simply means “capital city” in the Kazakh language. The modern capital city is what is termed a “planned city,” meaning it is a community that was carefully constructed from its inception and is typically developed on previously undeveloped green space. After Astana became the capital of Kazakhstan, the city rapidly developed not only as the seat of the government of Kazakhstan, which includes the Parliament House, the Supreme Court, the Aqorda Presidential Palace, and numerous government departments and agencies. It is also home to many futuristic buildings, hotels, and skyscrapers. Kazakhstan’s capital city of Astana also has extensive healthcare, sports, and institutions of higher learning.

The new commemorative coins are produced by the Kazakh State Mint at their facilities in Oskemen, East Kazakhstan, on behalf of the National Bank. The obverse includes a collage from some famous Astana buildings and its skyline. In the upper part, there is the inscription ASTANA and a stylised sky, which is created with a holographic image seen on the silver coins. In the lower part of the design is the numeral 20, which also includes a traditional geometric pattern within the number. The word ЖЫЛ (years) is placed below the numeral and the commemorative years 1998 – 2018. 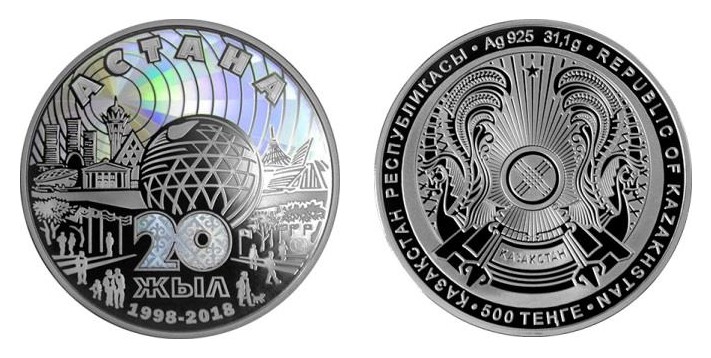 The reverse shows the emblem of the Republic of Kazakhstan. On the coin’s circumference is the denomination of 5000 TENGE, 500 TENGE, or 100 ТЕNGЕ in the national language. The text ҚАЗАҚСТАН РЕСПУБЛИКАСЫ and REPUBLIC OF KAZAKHSTAN are also included and encircle the state crest, which is centred. The silver coins contain additional test which denotes their weight and fineness at the top of the design. Ag 925 1 kg or Ag 925 31,1 g.

Each silver coin is specially encapsulated and presented in a custom case, accompanied by a certificate of authenticity in the languages of Kazakh, Russian, and English. The coins are available in all branches of the National Bank of the Republic of Kazakhstan as well as online.

Taiwan: Year of the Dog greeted with new commemorative and collector coins