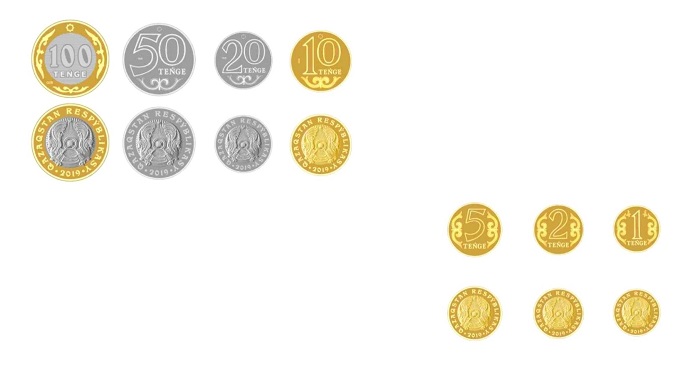 The National Bank of Kazakhstan has begun the issue of newly minted coins that include text in the Latin alphabet, which the country officially began transitioning to in 2017. The new coins are part of a presidential decree initiated by the former president, Nazarbaev, who announced in April 2017 that all national publications, documents, correspondences as well as street signs in the whole of Kazakhstan will switch from a Cyrillic-based alphabet to a Latin-based alphabet by 2025. Former President Nazarbaev signed the decree to enforce the change to national coinage in October 2017.

The move was seen as an effort by the Kazakh government in Almaty to emphasise distinct Kazakh culture and distance the country from both Russian influence and the Soviet era, which Kazakhstan declared their independence from in 1991. In 1929, Soviet authorities replaced traditional Arabic-based alphabets used by Muslim minorities in the Soviet Union with Latin-based national alphabets. In 1940, the Latin alphabet was replaced entirely with Cyrillic and was enforced upon the whole of the Soviet Union until its demise. The first banknotes were issued by the newly established National Bank of Kazakhstan in 1993 in both tiyn and tenge denominations, with the first circulation tiyn coins coming into use in 1994.

The new designs of the coins were approved by Interim President Qasym-Zhomart Toqaev, who took office on the 20th March 2019, one day after long-time leader Nursultan Nazarbaev announced his resignation from the presidency. The new coins dated “2019” do not differ in weight or diameter from the previous coins that carried inscriptions in the Cyrillic-based alphabet. The National Bank has advised the public that the previously issued coins will continue to remain legal tender.

Release of the new coins ranging from one to 100-tenge will be part of the transition and were available from the 26th April. The 100-tenge coin with an exchange value of 26 U.S. cents is a bi-metallic piece and was first issued in 2002. The remaining denominations are produced in base metal with the 50 and 20-tenge coins minted in nickel-plated steel and the 10 to one-tenge coins minted in a golden alloy of nickel-brass.

The coins continue to the Kazakhstan state’s coat of arms with the word QAZAQSTAN RESPYBLIKASY (“Republic of Kazakhstan”). The obverse side includes the coin’s nominal value represented in numerals with the name of the national currency, TENGE, and the initials of the National Bank of Kazakhstan, QUB.

The National Bank has not yet announced a date for the issue of currency tenge banknotes with the Latin alphabet changeover at this time. For additional information about the release of the new tenge coins, please visit the website of the National Bank of Kazakhstan.