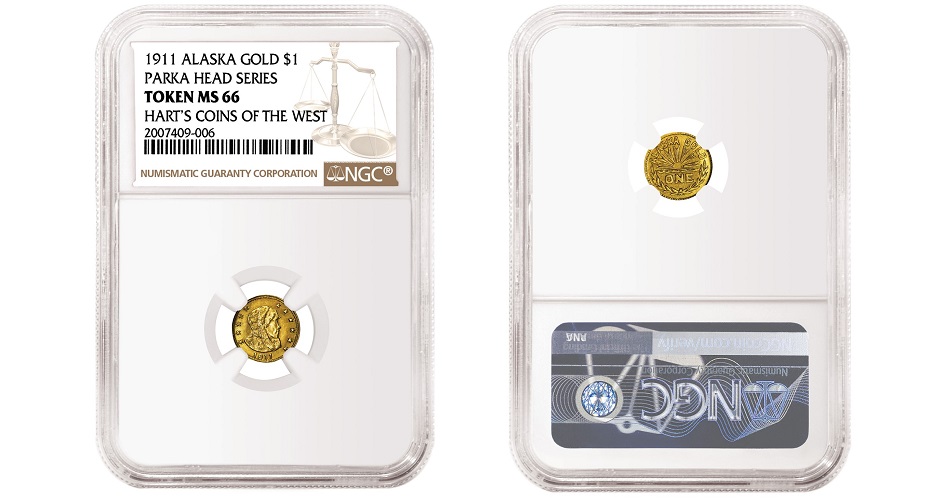 The finest-certified set of Hart’s Coins of the Golden West — comprising 36 NGC-certified pieces — will be offered by Kagin’s at auction on February 27, 2020. The collection brings together examples of the pieces that M.E. Hart Company of San Francisco had struck as souvenirs, with most carrying a date from 1897 to 1915, though some of the California pieces were given dates as early as 1849.

A complete set includes 12 Alaska pieces, 12 California pieces, and three each of Idaho, Montana, Washington and Oregon — all mountainous western U.S. states that had gold rushes in the late 19th or early 20th century. The pieces typically feature an Indian head, though some have a Minerva head, a figure in a parka or a prospector. They come in groups of three, with their different sizes sometimes denominated as 1/4, 1/2, and ONE.

Collectors can bid on the 36 pieces individually, before they are offered as a complete set starting at 105% of the total of the individual bids. The individual starting prices of all 36 pieces total $27,200.

Kagin’s is also offering another amazing NGC-certified set, one struck in silver: The Henderson-Marchase Collection of Lesher “Referendum Dollars.” Dated 1900 and 1901, they were the brainchild of Colorado entrepreneur Joseph Lesher. To learn more, click here.

Other NGC-certified rarities in sales being held by Kagin’s on February 27 and 28 include:

To learn more about the upcoming Kagin’s auction, click here.

All estimates are provided by the auction house.