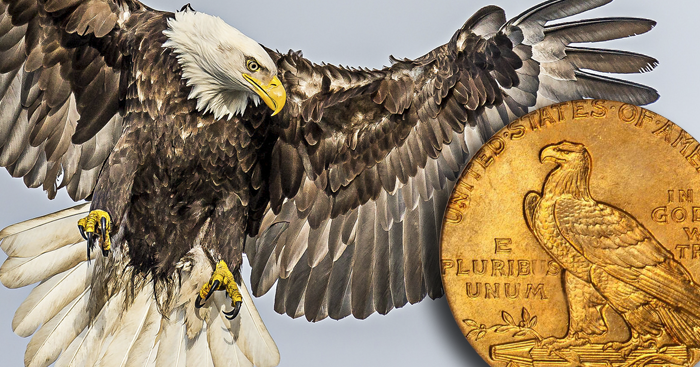 On June 20, 1782, the Continental Congress adopted the bald eagle as America’s national symbol, placing it on the Great Seal of the United States. Clutching 13 arrows in its left claw and an olive branch in its right, the fierce, beautiful bird symbolized a combination of strength and peace.

Since that time, the national bird has appeared on countless coins and paper bills of the United States. The success of the human species on the North American continent, however, nearly caused the extinction of the bald eagle. Common causes of death included hunting, electrocution on power lines, and exposure to oil, lead, and mercury, as well as to the most serious pollutant of all, the pesticide DDT. Carried into lakes and rivers by rain, DDT entered the bodies of fish, which are common prey of eagles. As the pesticide built up in the birds’ bodies, they were rendered sterile or their eggs were so brittle they were crushed in the nest. By the 1950s, the number of nesting pairs of bald eagles in the 48 contiguous states was reduced to just over 400.

Once the pesticide was banned in 1972, the bald eagle population bounced back. In 2006, more than 9,700 breeding pairs were reported in North America. Not only have they recovered from the brink of extinction, they are no longer considered endangered or even threatened. Their range stretches from Northern Mexico and Florida to Canada and Alaska. On January 28, 1982, President Ronald Reagan signed a proclamation declaring the year 1982 the “Bicentennial Year of the American Bald Eagle,” and June 20 of each year “National Bald Eagle Day.” The president’s proclamation is as follows:

By the President of the United States of America
A Proclamation

Whether silhouetted against the sky on a rocky pinnacle in Alaska or soaring majestically overhead in Florida, the bald eagle is admired as one of nature’s most spectacular creatures.

To catch a glimpse of this majestic raptor is to understand why the Founding Fathers chose it to represent the strength and courage of our great Nation. Its grace and power in flight, its vigilance and loyalty in defending its family group, and, most of all, its courage make the eagle a proud and appropriate symbol for the United States. Its presence on the Great Seal of the United States—one talon extending the olive branch of peace, the other brandishing the arrows of defense—is a symbol of friendship and cooperation to our allies and a warning to our adversaries that we are not to be trod upon.

No one is certain what the original United States population of the bird was, although it may have approached 75,000–100,000. We do know, however, that its extinction has become a disheartening possibility in recent years.

We have sought to prevent that possibility by restricting the use of certain pesticides. Shooting and habitat destruction are also being brought under control as a result of protection and conservation programs conducted under the Bald Eagle Protection Act and the Endangered Species Act. Scientists believe we are now beginning to see a subtle but definite population increase through the cooperative efforts of Federal and State fish and wildlife agencies, conservation and industrial groups, scientists, and private citizens. These efforts are truly indicative of the spirit of cooperation and perseverance which is at the very heart of our national character.

On June 20, 1782, the bald eagle became our Nation’s symbol and national bird. As we approach the bicentennial anniversary of that event, we have an excellent opportunity to pause and reflect upon the importance of the bald eagle, indeed of all our fish and wildlife resources, to a healthy America. On this occasion, let us renew our commitment and dedication to the conservation of our natural heritage as symbolized by the bald eagle.

Now, Therefore, I, Ronald Reagan, President of the United States of America, in accordance with a joint resolution of the Congress (SJ. Res. 121), do hereby proclaim June 20, 1982 as “National Bald Eagle Day” and designate the year 1982 as the “Bicentennial Year of the American Bald Eagle.” I call upon the people of the United States to join in these observances with appropriate activities in their homes and communities.

In Witness Whereof, I have hereunto set my hand this 28th day of January in the year of our Lord nineteen hundred and eighty-two, and of the Independence of the United States of America the two hundred and sixth.

The year 1982 saw the Mint’s return to producing commemorative coins, which it had not done since 1954. Given the proclamation of a “Bicentennial Year of the American Bald Eagle,” one might expect the commemorative to feature the national bird. Instead, pursuant to PL 97-104 (which was signed into law in December 1981), the first modern commemorative honored the 250th anniversary of the birth of George Washington. The bald eagle was featured in the reverse designs of numerous commemoratives over the years, but it was not until 2008 that the species had its very own commemorative series. After two-and-a-quarter centuries as a symbol of the United States, the bald eagle would now be recognized independently, as a species. It had appeared on cents, half dimes, dimes, quarters, half dollars, and silver dollars; on gold quarter eagles, half eagles, eagles, and double eagles; on commemorative-coin reverses; and on silver, gold, and platinum bullion. It had been posed with shields, arrows, flags, and olive branches, and depicted from nearly every angle both perched and in flight.


On December 3, 2004, Public Law 108-486, established the Bald Eagle Recovery and National Emblem Commemorative Coin Program. It called for clad half dollars, silver dollars, and gold $5 coins to celebrate the removal of the species from “threatened” status:

In anticipation of the nationwide observance of the official removal, by 2008, of the bald eagle from the “threatened” species list under the Endangered Species Act of 1973, and the 35th anniversary, in 2008, of the Endangered Species Act of 1973 and the designation of the bald eagle as an “endangered” species under such Act, Congress wishes to offer the opportunity for all persons to voluntarily participate in raising funds for future bald eagle recovery, monitoring, and preservation efforts and to contribute to a special American Eagle Fund endowment managed by the not-for-profit American Eagle Foundation of Tennessee in the United States, in cooperation with fund management experts.

From top to bottom, the clad half dollar, silver dollar, and gold $5 coins in the Bald Eagle program (hover to zoom). Uncirculated strikes are shown; Proofs were also struck and sold. (U.S. Mint photos)

These days, it is easy to take the national bird for granted. As a symbol, it is ubiquitous on our coinage; and as a species, its status is—at least for now—secure. It deserves to have attention called to it on a special day each year, giving us the opportunity to appreciate the vulnerability and resiliency of both the species and the democracy it represents.   ❑