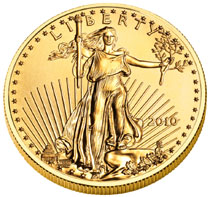 For the month of July 2010, overall sales of the United States Mint’s gold and silver bullion coins continued at the recent elevated levels. On an individual basis, the product mix for gold bullion did undergo a significant shift towards one ounce coins following last month’s initial strong demand for fractional weight coins.

During the month, the United States Mint offered the one ounce American Silver Eagle as their only silver bullion option. Later this year, a brand new five ounce silver bullion series featuring duplicate designs from the National Park Quarters series will debut. For gold bullion coins, the US Mint offered the 22 karat American Gold Eagle coins in one ounce, one-half ounce, one-quarter ounce, and one-tenth ounce sizes, and the 24 karat American Gold Buffalo in one ounce size only. Still missing from the Mint’s bullion lineup is the American Platinum Eagle, which has not been available in bullion format since late 2008.

The table below summarizes the July 2010 sales figures for US Mint bullion coins. The first number column shows the total sales during the month, and the second column shows the total sales for the current year through July 31, 2010. Note that this report includes bullion coin sales only, not numismatic products which are tracked separately in the US Mint Product Sales Reports.

Sales of one ounce Silver Eagle were 2,981,000 for the month. This is right around the average monthly sales for the coins during 2010 so far. While this amount is still presumably short of fulfilling full public demand for the coins, it does represent an increased level of production compared than previous years. For the year to date, silver bullion sales are more than 25% higher than last year.