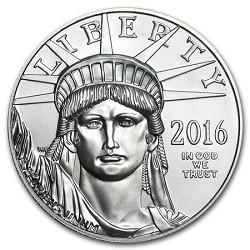 The U.S. Mint’s American Eagle gold bullion sales fell in July, logging 38,500 total ounces sold to its authorized purchasers (AP’s) as compared to June’s tally of 73,500 ounces. Gold has gained slightly in value, however, and is now worth $1,355 an ounce according to the London Bullion Market Association; that marks an increase of $15 since the start of last month.

American Buffalo gold bullion coins also saw demand slacken a bit, and last month ended with 122,500 pieces sold; 2015’s end-of-July total was 128,500. Silver Eagles had their slowest sales month of the year by far, and as of last week they are no longer on pace to break 2015’s sales record of 47 million ounces sold.

The Mint began selling 2016 American Eagle one-ounce platinum bullion coins to its AP’s on July 25, and the issues sold 17,100 pieces on their first day of availability. That total grew to 19,000 units by July 29, which was the last time the Mint reported any new sales of the issues. Platinum is currently valued around $1,140 an ounce.

Silver is valued at $20.21 an ounce at the time of this writing. Prior to July, that value had not been realized by the commodity since August of 2014.