The latest issue in the ongoing First Spouse Gold Coin Program has been released by the United States Mint. The coins honoring Julia Grant, the wife of the 18th President Ulysses S. Grant, officially went on sale June 23, 2011. 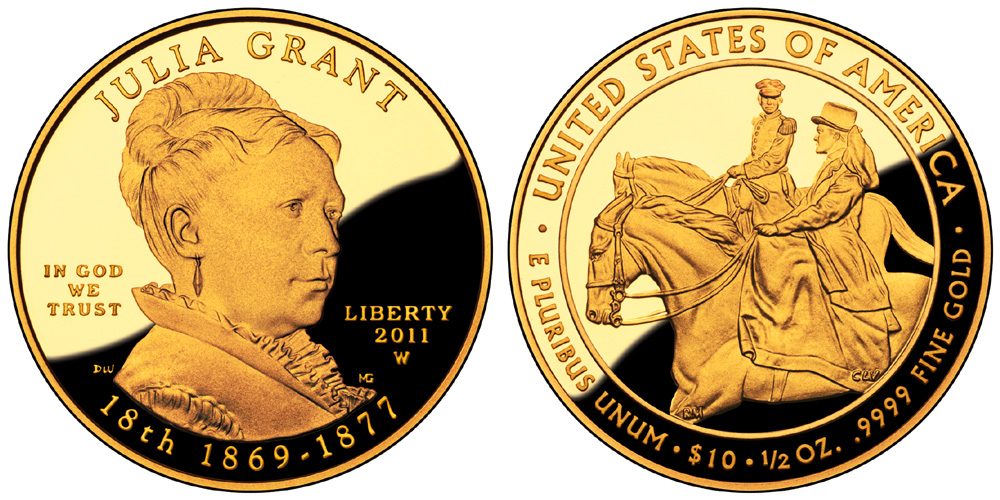 The obverse design of the coin features a portrait of Julia Grant designed by Donna Weaver and engraved by Michael Gaudioso. Inscriptions indicate the name, order of the Presidency, the dates of the two terms, “In God We Trust”, and “Liberty”. The reverse of the coin, designed by Richard Masters and engraved by Charles L. Vickers, depicts a young Julia Dent and Ulysses S. Grant riding horseback at White Haven. The inscriptions indicate the face value, weight and fineness of the gold content, “United States of America”, and “E Pluribus Unum”.

The coins are available in either proof or uncirculated versions with a maximum mintage of 15,000 pieces across both options. Each coin contains one-half ounce of 24 karat gold and is struck at the West Point Mint. 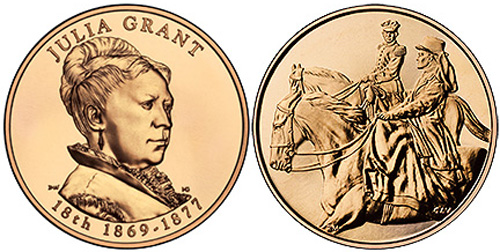 On the same day, the United States Mint also began sales of the Julia Grant Bronze Medals. The medals have a diameter of 1-5/16 inches and feature the same design as the gold coins with some inscriptions removed. Each medal is priced individually at $7.95, and will also be incorporated into a four medal set released near the end of the year.