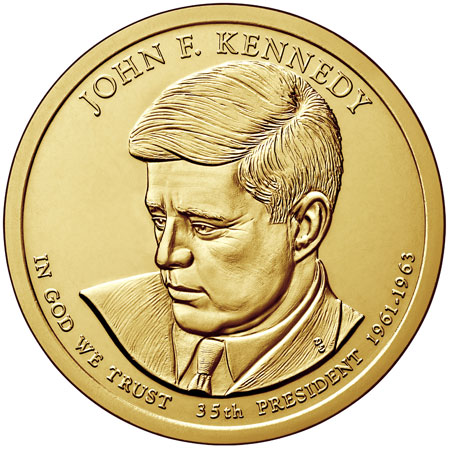 The obverse design of the coin features a portrait of President Kennedy in a downward glancing pose, designed and engraved by Don Everhart. Inscriptions read “John F. Kennedy”, “In God We Trust”, “35th President”, and the dates served “1961-1963”. The reverse of the coin features a rendition of the Statue of Liberty, also designed and engraved by Don Everhart. The inscriptions include “United States of America” and the denomination expressed as “$1″. The edge of of the coin contains the date, mint mark, and motto “E Pluribus Unum”.

The product options available for the circulating quality John F. Kennedy Presidential Dollars include coins packaged in 25-coin rolls, 100-coin bags, or 250-coin boxes from either the Philadelphia or Denver Mint facilities. The United States Mint branded packaging for each product displays the President’s name, the mint of origin, and the face value of the contents.

Forthcoming releases of the series will feature Lyndon B. Johnson in 2015, and Richard M. Nixon, Gerald Ford, and Ronald Regan in 2016.