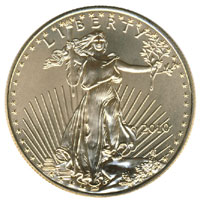 The higher level of sales is partially attributable to the release of the 2010 Gold Eagle and Silver Eagle bullion coins starting on January 19, 2010. Typically, these coins are available for ordering in late December for delivery in early January. The delayed launch may have created some pent up demand from collectors and bullion investors eagerly waiting for the 2010-dated versions to be released.

The US Mint sold a total of 85,000 ounces of gold during the month. This is a decline from the huge month recorded for December 2009, when the Mint sold 247,500 ounces across five different bullion product offerings. This is also down from the year ago period of January 2009 when 92,000 ounces were sold. The US Mint only offered the one ounce 22 karat Gold Eagle for sale. The status of fractional gold bullion and the 24 karat Gold Buffalo remain uncertain.

Through their single silver bullion offering the Mint sold 3,592,500 ounces. This is actually the second highest monthly total achieved for sales of the American Silver Eagle bullion coin. The only month that recorded higher sales was back in December 1986, the first full month that silver bullion coins were offered to the public. The January 2010 sales easily top the prior month when 2,773,500 ounces were sold and the year ago period when 1,900,000 ounces were sold.