The Bank of England has announced that 19th century author and poetess Jane Austen (1775 – 1817) will be featured on the £10 banknote of the “F” series to be introduced in 2007 with the issue of the £20 featuring Economist Adam Smith.

After much controversy in the UK following the announcement in March that Sir Winston Churchill would be included on the upcoming “F” series £5 to be issued in 2016 and thus supplanting Elizabeth Fry on English banknotes, campaigners petitioned the Bank of England to keep women personalities on the reverse sides of the notes. Austen, an English novelist who, using wit and social observation, provided astute insights into 19th  century life, often praising the virtues of reason and intelligence and highlighting some of the barriers that society erected against the progression of women. Many academics and the public alike consider her to be one of the greatest writers in English history. 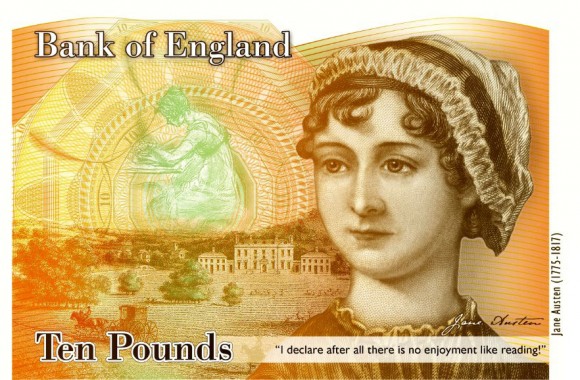 The new note, scheduled to be released in 2017, will include an image of Austen which was commissioned by James Edward Austen Leigh (Jane Austen’s nephew) in 1870, and adapted from an original sketch drawn by her sister, Cassandra Austen. In the background of the note includes an image of Godmersham Park which was home of Edward Austen Knight, Jane Austen’s brother. Jane Austen visited the house often and it is believed that it was the inspiration for a number of her novels. Also included in the proposed design is an illustration of Miss Elizabeth Bennet undertaking “The examination of all the letters which Jane had written to her”– from a drawing by Isabel Bishop (1902-1988). A famous quote attributed to Jane Austen “I declare after all there is no enjoyment like reading!” is to be placed just under her portrait which will be situated to the right half of the note.

The banknote was unveiled by the Bank of England’s new Governor Mark Carney and the Bank’s Chief Cashier Chris Salmon along with the head of the Notes Division Victoria Cleland at Chawton House. In his comments during the unveiling of the note Governor Carney stated, “Jane Austen certainly merits a place in the select group of historical figures to appear on our banknotes. Her novels have an enduring and universal appeal and she is recognized as one of the greatest writers in English literature.”

With the issue of the £10 note in 2017, the “F” series will be complete as the £5 Churchill note is scheduled for issue the year in 2016. For more information on the new proposed note and to read more about Jane Austen, please visit the website of the Bank of England at: http://www.bankofengland.co.uk/banknotes/Pages/characters/austen.aspx