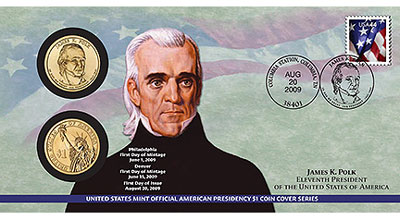 The cover features two James K. Polk Dollars from the first day of production. The Philadelphia Mint coin was produced on June 1, 2009, and the Denver Mint coin was produced on June 15, 2009. The coins are mounted on a custom display card with a 44-cent Flag stamp. The postmark is August 20, 2009, Columbia, TN from the first day the coins were released to the public.