The latest product released by the United States Mint is the Presidential $1 Coin and First Spouse Medal Set for James Buchanan’s Presidency. The sets officially went on sale yesterday, September 23, 2010. 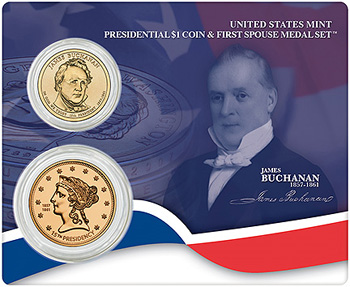 Each set includes one uncirculated 2010 James Buchanan Presidential Dollar and one Buchanan’s Liberty First Spouse Medal. The dollar coin features a portrait of the 15th President designed and sculpted by Phebe Hemphill on the obverse and a depiction of the Statue of Liberty by Don Everhart on the reverse. The medal is based on the Buchanan’s Liberty First Spouse Gold Coin, which features a reproduction of Christian Gobrecht’s design for the Liberty Head Quarter Eagle on the obverse and a scene of young James Buchanan working as a bookkeeper at the family general store on the reverse.

The coin and medal are mounted on a plastic card with an illustration on the front and issuance information on the back. Pricing has been set at $11.95 per set, with shipping and handing of $4.95 applicable to all orders. Orders may be placed online at http://catalog.usmint.gov/

Similar sets have been offered for each issue of the Presidential Dollar series from 2007 to present. In the complete series, this represents the 16th release to date. One coin and medal set has been issued for each Presidency, with the exception of John Tyler. Two separate sets were issued to include the two different First Spouse Medals issued for his Presidency.