President James Buchanan was our 15th President, the only Pennsylvanian to date, and the last to be born in the 18th Century. He was also the only bachelor both during and after his time in office. He was an experienced politician, having served in both houses of Congress as well as in the cabinet of President Polk. He was termed a ‘doughface’: a Northerner with sympathies to the causes of the South. His administration did little to ease the tensions between the two sides, demonstrated by its involvement in the Dred Scott Case and the attempted admission of Kansas as a slave state. 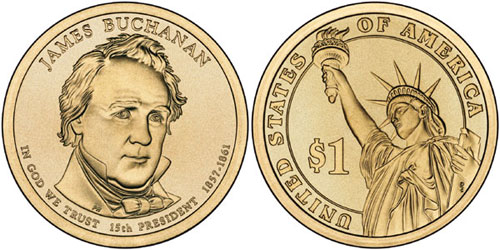 The coin bearing President Buchanan’s image is the 15th in the series of Presidential Dollar coins, and the third to be issued this year. Its obverse depicts President Buchanan, with inscriptions for his years in office (1857-1861), order of the Presidency, and the motto “In God We Trust”. The reverse shows the Statue of Liberty in the same design as been depicted on all Presidential dollars. The edge has the motto “E PLURIBUS UNUM”, the year of issuance, and the mint mark.

The James Buchanan Presidential Dollar is or will be available from the U.S. Mint in the following products:

The general circulation release date for the James Buchanan Dollar is August 19, 2010. Unmixed quantities can be ordered by financial institutions with direct accounts with the Federal Reserve. A special ordering period is in place beginning July 29 and ending September 2. Boxes of wrapped rolls containing $1,000 face value in coins or $2,000 bags may be ordered during this period.

A launch ceremony for the coin will be held on August 19, 2010 10:00 AM at Wheatland, the former President’s home in Lancaster, Pennsylvania. These events are typically followed by a coin exchange where attendees can exchange currency for roll so of the newly released coins.