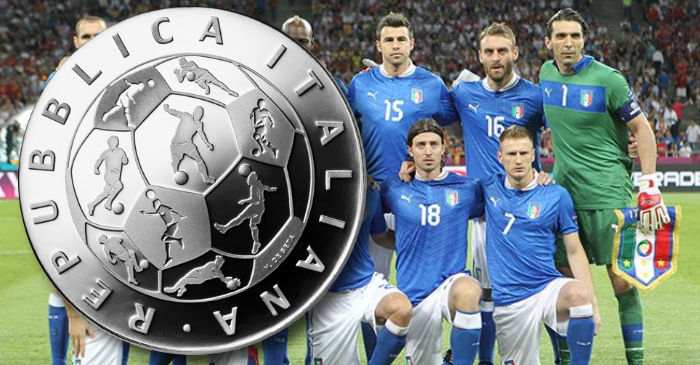 The Istituto Poligrafico e Zecca dello Stato (IPZS) have issued a new silver coin in celebration of the FIFA World Cup tournament, which will be hosted this year in Russia with venues in various cities and venues. Sadly, for the first time in the tournament’s history, the Italian team did not qualify — which was heartbreaking for many. Participation of the national Italian team in the World Cup is, for many, almost mandatory — since this phenomenal group of players participated in every championship of the FIFA World Cup from its establishment in 1930 and has lifted the trophy an astounding total of four times. The first time the Italian team was triumphal was in 1934 when they were playing against the Czechoslovakian team. The second time they won was in 1938 against the Hungarian team, and the third time was in 1982 when they played against the powerhouse team of West Germany. The last time the Italian team won the World Cup was in 2006 when they played against France.

The final phase of the XXII FIFA World Cup will take place in Russia from the 14th June to the 15th July 2018. This is an important date for millions of football fans around the globe, who are eager to see 32 national teams from the five continents compete in the stadiums of 11 Russian host cities for this most important trophy. Although the Italian team did not qualify, they (and all Italian football fans) will be there in spirit from the first kick-off of the tournament until the very last goal declares the new champions of the 2018 World Cup.

The coin is designed by Valerio De Seta, who has illustrated a sequence of football moves relating to the upcoming sporting event in Russia and is reproduced on a soccer ball. On the right is the name of the designer, V. DE SETA, while around the primary design is the inscription REPUBBLICA ITALIANA.

The design on the reverse includes figurative references and elements representing the Russian cities that will host the world cup and encircle the official logo of the FIFA WORLD CUP RUSSIA 2018 sporting event. On the left is the letter R, identifying the Mint of Rome, and below the primary design is the value of 10 EURO.

The coin is encapsulated and presented in an IPZS custom case and includes a certificate of authenticity. For additional information on this coin and others available from the IPZS, please visit their website.