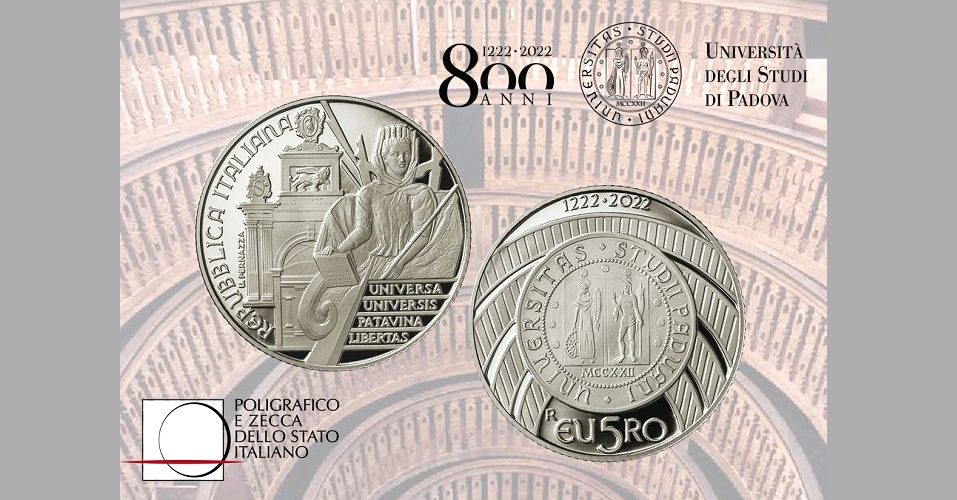 The Istituto Poligrafico e Zecca dello Stato (IPZS) will issue (2nd February) new Proof silver coins which remember the 800th anniversary of the founding of one of the world’s oldest universities. The University of Padua is the second-oldest university in Italy, after the University of Bologna, as well as being the fifth-oldest surviving university in the world. Padua’s university is accepted to have been founded in 1222, which corresponds to the first time when the university was cited in a historical document as pre-existing, therefore its origins are certainly older. Padua’s institute of higher learning came to be when a large group of students and professors from the University of Bologna left the city in search of more academic freedom. Having adopted the Latin motto Universa universis patavina libertas (“Paduan freedom is universal for everyone”), the university was especially renowned for its research, particularly in the areas of medicine, astronomy, philosophy, and law from the 15th to the 18th century.

Designed by IPZS graphic artist Uliana Pernazza, whose depiction features the grand entrance gate of the Bo Palace, the historical seat of the University of Padua. To the right is the handrail of the Stairs of Knowledge, which is located inside the palace and reproduced together with frescoes by Giò Ponti showing the symbolic path a student follows until he reaches the Alma Mater. On the stairs is the motto of the University UNIVERSA UNIVERSIS PATAVINA LIBERTAS, and along the left edge of the primary design is the inscription REPUBBLICA ITALIANA. On the reverse side and in the centre is the seal of the University of Padua standing out on the stylised reproduction of the Anatomical Theatre of the University and which was the first stable theatre of its kind in the world. Above the primary design are the years 1222 • 2022, denoting the years of the foundation of the university and that of the coin’s issue. Below the seal is the letter R identifying the Mint of Rome and the value 5 EURO.

The encapsulated coins are presented in an IPZS-branded custom case accompanied by a certificate of authenticity. For additional information about this and other coins on offer from the Istituto Poligrafico e Zecca dello Stato (IPZS), please visit their website.