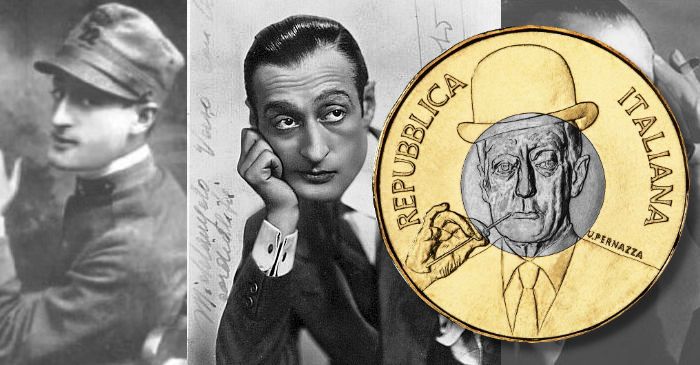 The Istituto Poligrafico Zecca della Stato (IPZS) have launched (19th September) their first bi-metallic €5 base-metal coin, which remembers the 50th anniversary of the death of one of Italy’s more memorable and irreverent comedians, known nationally by the stage name “Totò.” Born Antonio Clemente on the 15th February 1898, he was the son of Anna Clemente, a Sicilian woman of modest background, and allegedly, the Neapolitan Marquis Giuseppe De Curtis. Clemente’s parents were not married and it was not until 1937 that his biological father would recognise his son. Before this recognition in 1933, at age 35, he was adopted by the Marquis Francesco Maria Gagliardi Focas, who did so in exchange for a life annuity. As a consequence of this adoption, Totò became the heir of two noble families and claimed an impressive slew of noble titles denoting these inheritances.

As a new member of the titled nobility—which was in itself somewhat comical for a man who made his name as a comedic entertainer—his name was legally changed in 1946 from Antonio Clemente to “Antonio Griffo Focas Flavio Ducas Komnenos Gagliardi de Curtis of Byzantium, His Imperial Highness, Palatine Count, Knight of the Holy Roman Empire, Exarch of Ravenna, Duke of Macedonia and Illyria, Prince of Constantinople, Cilicia, Thessaly, Pontus, Moldavia, Dardania, Peloponnesus, Count of Cyprus and Epirus, Count and Duke of Drivasto and Durazzo.” This change was recognised by the Tribunal of Naples, who henceforth saw one of their previously poorest citizens as a member of the now-defunct Italian nobility.

By claiming these many titles, which had since become meaningless with the end of the Monarchy in 1946, the comedian would mock them for their intrinsic worthlessness in his act. In fact, when he was not using his stage name “Totò,” he mostly referred to himself simply as “Antonio De Curtis.”

As early as 1913, at the age of 15, Totò was already acting as a comedian in small theatres under the pseudonym “Clerment” and was well on the way to developing his repertoire—mostly consisting of imitations of the characters of Italian comic Gustavo De Marco. Like all able-bodied men of his age, he served in the army during World War I, and after the fighting ceased, he was able to resume his career in acting. It was at this time that Totò perfected the art of the guitti, or improvisation, favoured by many of the Neapolitan scriptless comedians. He also began developing the trademarks of his comedic style and persona, including a puppet-like, disjointed gesticulation, exaggerated facial expressions, and an extreme, sometimes surrealistic, sense of humour—largely based on accentuating primitive urges such as hunger and amorous desire.

By the 1920’s, Totò’s performances extended into the genre of avanspettacolo, an Italian version of a vaudevillian mixture of music, ballet, and comedy preceding the main act. Its name roughly translates to “before show.” During the 1930s, Totò organised his own theatrical company with which he travelled across Italy, and by 1937, he had appeared in his first movie, entitled Fermo con le Mani. He would go on to star in another 96 films throughout his career, many of which are still frequently broadcast on Italian television. In his vast motion picture career, Totò is remembered as having worked with virtually all major Italian actors and many directors of note at the time.

Breaking new ground in the 1950s, Totò started to compose poetry, and the best-known of these works is “’A Livella,” which tells the story of an arrogant rich man and a humble poor man who meet after their deaths and discuss their differences. Totò is also remembered as a songwriter, as he penned the popular song “Malafemmena,” or “Wayward Woman.” The song, which held personal meaning to him, was dedicated to his ex-wife Diana after they separated. The song is considered a classic of the Neapolitan popular-music genre.

Totò died at the age of 69 on the 15th April 1967, in Rome, after suffering a heart attack. Due to his overwhelming popularity, there were no fewer than three funeral services. The first of these was held in Rome, while the second and third were held in his birth city of Naples. In the third service, organised by the local Cosa Nostra boss, an empty coffin was carried along the packed streets of the popular Rione Sanità quarter where he was born.

The coin is designed by Uliana Pernazza and the obverse depicts Totò, as he was known in his typical theatrical “mask” or persona. The portrait is inspired by a photograph taken by Guy Bourdin, of the Guy Bourdin Estate, and is re-created on this coin courtesy of the Louise Alexander Gallery. (A signed print of the photo can be viewed on the website of Christie’s auction house.) To the right of Totò is the name of the designer, U. PERNAZZA, and seen around the image is the inscription REPUBBLICA ITALIANA.

On the reverse are elements of film encircling Totò’ s typical hand gesture. Above the primary design is the denomination of 5 EURO, and on the left is Totò’s facsimile signature. On the right field is the letter R, which identifies the Mint of Rome, and below are the commemorative years 1967 and 2017—for Totò’ s death and the coin’ s issue year, respectively.