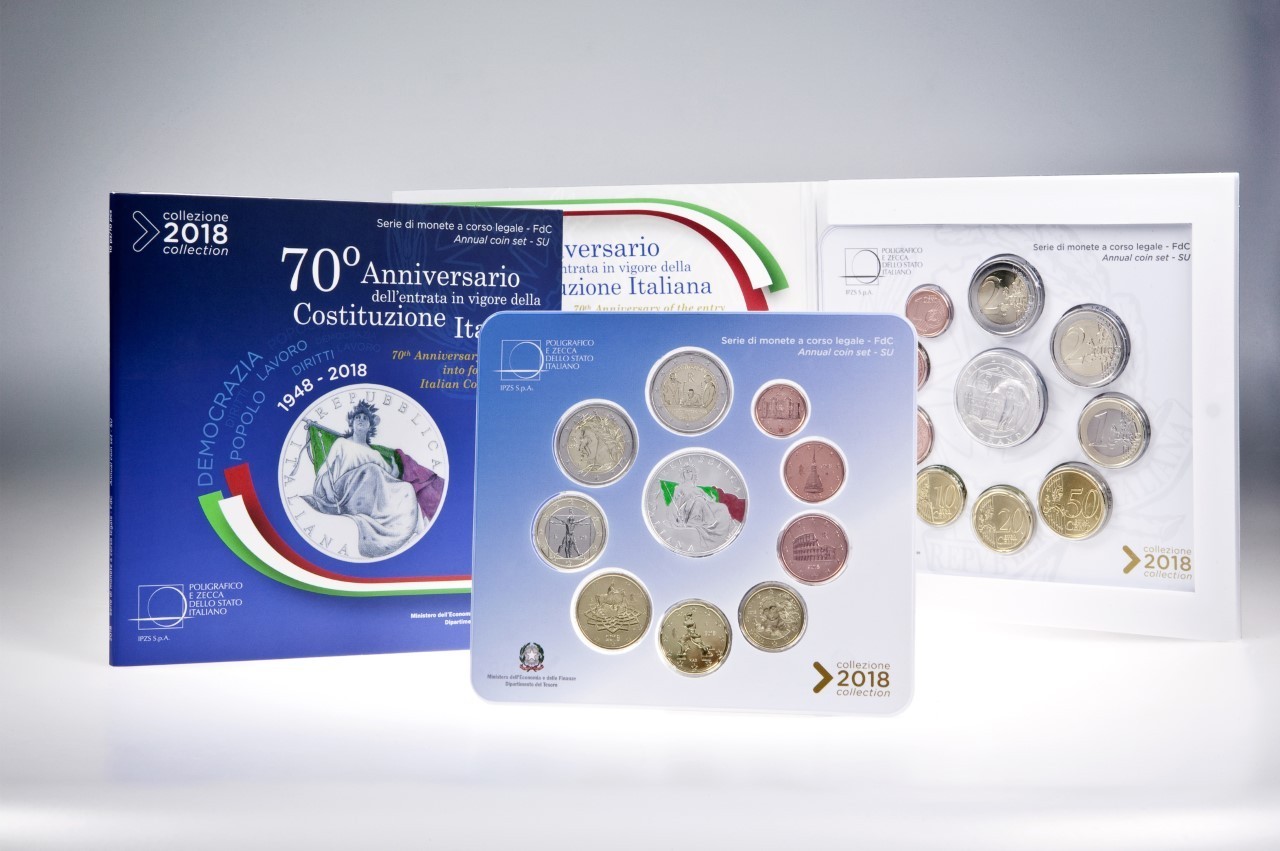 The Istituto Poligrafico Zecca della Stato (IPZS) have released (5th March) their 2018 Brilliant Uncirculated Set which will include 10 coins, all eight definitive circulating coins from one cent to two euros. The set also includes the commemorative five-euro silver coin which celebrates the 70th anniversary of the proclamation of the Italian Republic as well as the two-euro commemorative coin which observes the 70th anniversary of the Republic’s constitution which went into effect in January 1948.

Five-euro: The coin is designed by Luciana De Simoni and includes a seated allegorical female figure representing Italia, along with the colours of green and red — two of the three colours which comprise the Italian flag which are depicted as a cloak around Italia. The text REPUBBLICA ITALIANA is placed around the primary design. The reverse side depicts a representation of the constitution in the form of a book along with the figure of a triumphant “Italia” holding a sprig of Italian stone pine. The design is completed by the star of the Italian Republic and a detail from the fresco by Cesare Maccari Humanities and the arts. The text SEI LIBERA SII GRANDE (You are free, be Great) is placed around the primary design around the rim with the commemorative inscription COSTITUZIONE ITALIANA 1948 2018 placed over the open book arranged in three lines. The denomination of 5 EURO is placed just above the commemorative inscription and the mint mark “R” is just below the open book.


Tw0-euro: The coin is designed by Uliana Pernazza and depicts a re-creation of the moment when Italy’s Interim Head of State Enrico De Nicola (in office from 1946 to 1948) signed the law which enacted the Constitution of the Italian Republic, on the 27th December 1947. To his right was the Prime Minister Alcide De Gasperi (in office from 1945 to 1953) and, to his left, Umberto Terracini, president of the Constituent Assembly. The commemorative inscription COSTITUZIONE is placed above the primary design with the additional text CON SICURA COSCIENZA (“with clear conscience”) placed below. The mint mark “R,” identifying the Mint of Rome and the dates 1948 • 2018, the commemorative year and that of the coin’s issue is seen below the additional inscription. The 12 stars of the European Union surround the complete design. The reverse side is that of the standard euro-zone design which has been in use since 2002 and includes the coin’s denomination represented by the numeral 2 superimposed over the map of Europe and 12 stars of the original member states of the European Union.

The coins in the set are enclosed in a sealed, rigid colour plastic holder and presented in a colourfully printed folder with a snap-lock magnetic closure. The mintage for the complete set is limited to 10,000 inclusive. For additional information on this coin and others available from the IPZS, please visit their website.