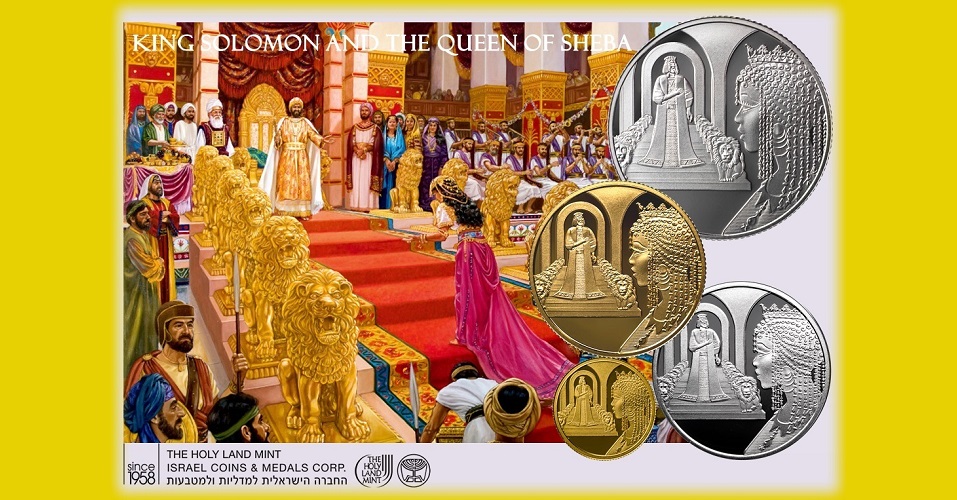 The Bank of Israel has launched their latest set of gold and silver coins which are part of the popular “Biblical Art” series highlighting some of the Holy Book’s most well-known stories and persons. Begun in 1994 and now in its 27th year, the latest Biblical story — and which is also told in history — focuses on the story of the Queen of Sheba, which is imbued with descriptions of King Solomon’s greatness, his wealth and wisdom, the splendour and glory of the king’s court, and of the king himself. According to the Bible, the Queen of Sheba is not referred to by name but rather, she is described as the Queen who came to Jerusalem to meet with King Solomon and assess the wisdom for which he was reputed. In the Book of 1 Kings, chapter 10 verse 1, it was written “and she came to test him with riddles.” 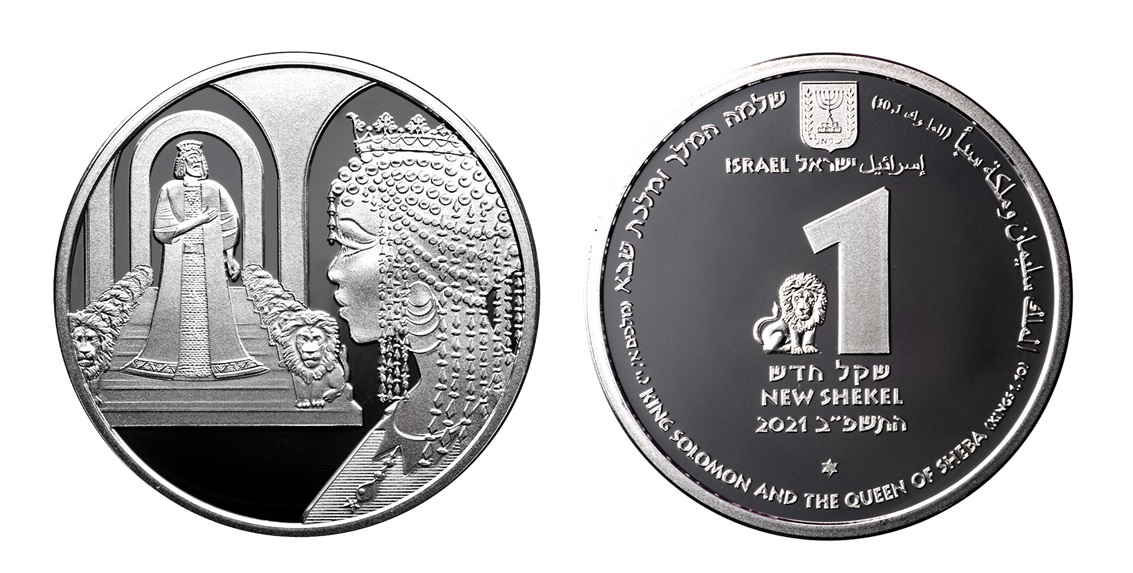 All that the Queen of Sheba beheld at the king’s palace and during the king’s dinner surpassed her expectations, so much so, that she commented, “I have beheld that not even a half had been told to me. You have wisdom and goodness in excess of that which I have heard” (1 Kings chapter 10 verse 7). In addition to her warm words, the Queen of Sheba brought fine gifts with her. On his behalf, King Solomon fully reciprocated and presented the Queen with “all her wish that she requested.”

While the Queen of Sheba’s visit was to assess King Solomon’s wisdom, it would seem as though, behind the scenes, there was in fact a diplomatic reason for the state visit. King Solomon had been endeavouring to introduce a new sea trade route to the Far East, and if pursued could be harmful to the desert tribes who were accustomed to transporting their merchandise by camel caravans. It was believed the real purpose of the Queen of Sheba’s visit may have been to stop this sea trade. According to Biblical accounts, King Solomon indeed gave the Queen of Sheba all she wished and the visit came to a successful conclusion with an agreement with the king. 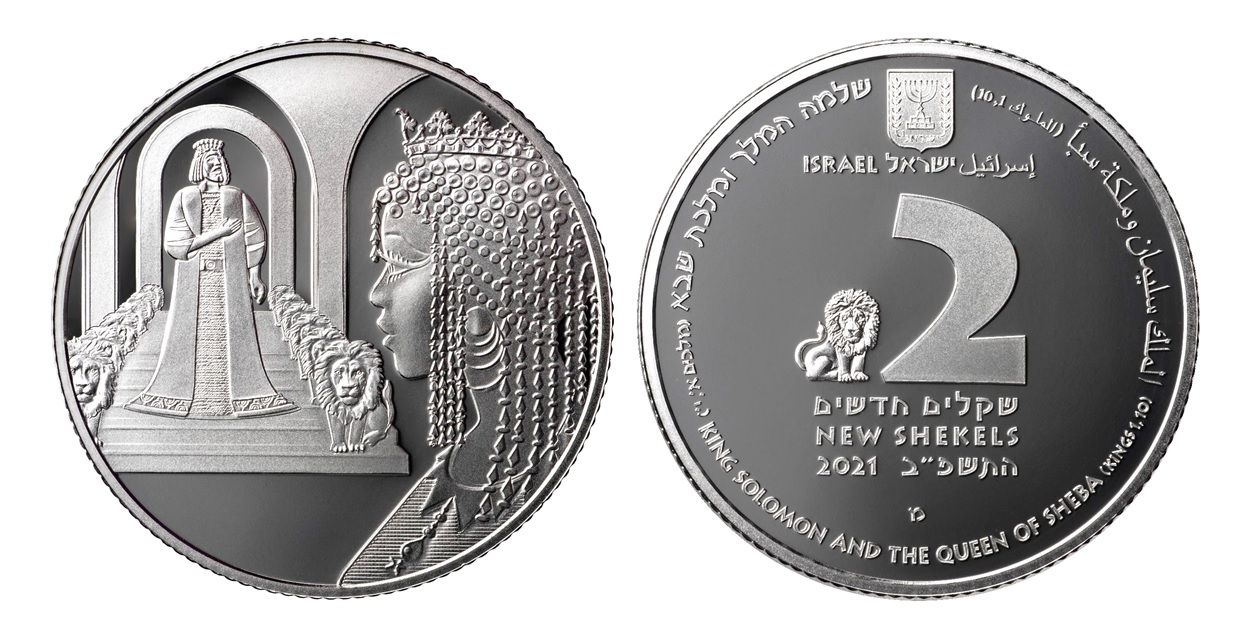 According to the Ethiopian National Imperial Epic, known as Kebra Nagast (or Glory of the Kings), it tells the story of King Solomon and the Queen of Sheba in detail. It is told that the king invited the queen to dine with him the day before she was to depart, and asked that well-seasoned food be prepared for her so as to make her very thirsty. When the queen awoke in the middle of the night thirsty for water (which she drank), the King leapt out from a hiding place. He told her that since water was the most expensive commodity in his kingdom, even she as Queen of Sheba must pay for it. The queen conceded and it was from this encounter that a child was conceived. On the return journey to her land, she gave birth to their son, whom she called “Son of the Wise.” This man was also known as Menilek, founder of the Solomonic dynasty which would go on to rule the Empire of Ethiopia until the last Emperor Haile Selassie was overthrown. 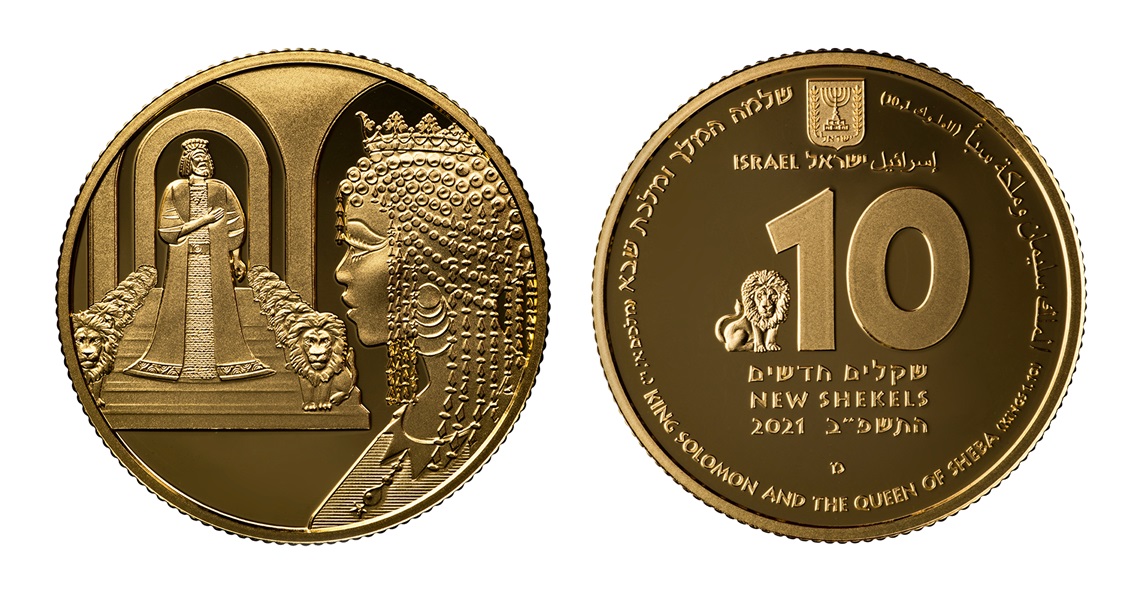 The gold and silver Proof and Brilliant Uncirculated quality coins are designed by Aharon Shevo and features on the obverse a standing King Solomon beside 12 lions of gold that decorated the steps leading up to his throne. Also prominent is an image of the bejewelled head in profile of the Queen of Sheba in the king’s palace waiting to be received by the king. The reverse side includes the Israeli State Emblem placed at the top and the face value centred with a numeral and text in Hebrew and English along with the year 2021 and the Hebrew year. Where applicable, a mintmark Mem “מ” denotes Proof strikes and the Star of David is indicative of Brilliant Uncirculated strikes. A border inscription KiING SOLOMON AND THE QUEEN OF SHEBA is included in three official languages. Long with the denomination, a decorative element representing one of the lions of gold is placed to the left of the numeric denomination.

Each encapsulated coin is encased in a Holyland-branded custom case and is accompanied by a certificate of authenticity. The two silver and two gold coin denominations are all available as separate purchases. For more information about these coins and others issued by the Bank of Israel, please visit the website of the Israel Coins and Medals Corporation.

Israel: New commemorative five-shekel coins to be issued in gratitude to medical teams during pandemic