The Government and Treasury of the Isle of Man have released (8th January) their annual decimal coin set which includes the Isle’s own circulation type £5 piece.

The island’s diverse historic buildings characterize different stages in the Isle of Man’s distinct social, cultural, and economic development. The earliest attempts at construction can be seen in the many fine stone circles and monuments found throughout the island, some of which are depicted on these coins. The set includes all eight circulation denominations, as well as the specially produced £5 piece struck in Virenium. 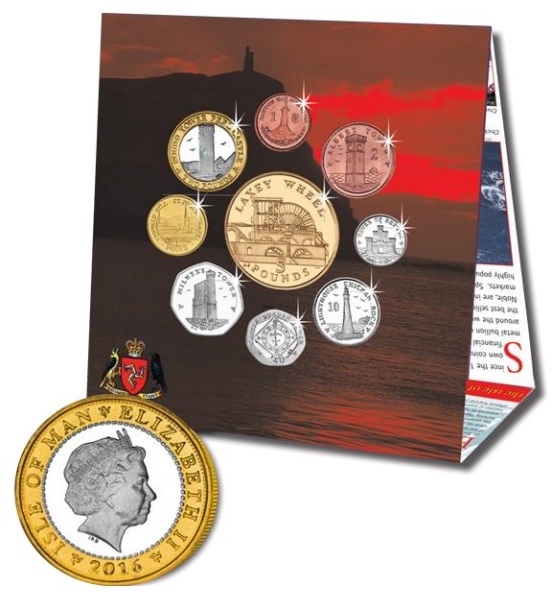 The eight circulation coins of the Isle of Man, from the penny up to the £2 pieces, correspond to the specifications for circulation coinage of the United Kingdom and are also equal in value. The coins are struck at the Pobjoy Mint, UK, on behalf of the Treasury of the Isle of Man. Each I.O.M. coin includes the effigy of HM Queen Elizabeth II as designed by Ian Rank-Broadley and used since 1998.

One Penny – Santon War Memorial: The first war memorial to be built using public subscription, the Santon War Memorial was unveiled in 1920 in memory of six men of the parish of Santon who lost their lives in the Great War, 1914-1918.

Two Pence – Albert Tower: The Albert Tower was built to commemorate the royal visit of Prince Albert and Queen Victoria in 1847. Prince Albert was rowed ashore at Ballure, where he made his way up the glen and into Lhergy Frissell; he climbed to the top of the hill and viewed the surrounding town of Ramsey and the northern plain.

Five Pence – Tower of Refuge: Sir William Hilary is remembered in part for conceiving a life boat service manned by a trained crew, prompting the creation of the Royal National Lifeboat Institution. The idea took shape after he was washed overboard during a rescue–the coast was too far to swim, impressing upon him the importance of establishing a place for sailors to wait for rescue.

Ten Pence – Lighthouse, Chicken Rock: Built between 1869 and 1874 by David and Thomas Stevenson, this tower was constructed on a submerged coral reef. The granite for the tower was shipped from Scotland and cut in a mason’s yard in Port St. Mary.

Twenty Pence – Castle Rushen Clock: Believed to be the best example of a medieval castle in the British Isles, Castle Rushen is thought to have been built around 1200 and served as the residence of the last Norse King of Mann. The clock room was formerly used as the castle chapel and contains a clock presented by Queen Elizabeth I in 1597, while she held the Island in trust pending a dispute.

Fifty Pence – Milner’s Tower: This tower was built in 1871 by the residents of Port Erin in honor of William Milner, a Liverpool safe maker and benefactor of the town. The building is constructed in the shape of a lock in honor of Milner’s profession. The tower was meant to be built in secret as a surprise, but once Milner found out about the project he donated much of the building cost.

One Pound – Tynwald Hill St. John’s Chapel: The greatest man-made construction on the Isle of Man is also one of the oldest and simplest. The four-tiered mound of earth known as Tynwald Hill, opposite St. John’s Chapel, may have originally started off as a burial mound, but was adopted by the Vikings over a thousand years ago for the business of open-air law making and other matters of government.

Two Pounds – Round Tower, Peel Castle: Peel Castle is one of the Island’s principle historic monuments and occupies the important site of St. Patrick’s Isle at Peel. The Castle’s Curtain Wall encircles the ruins of many buildings which are a testimony to the site’s religious and secular importance in Manx history.

Five Pounds – Laxey Wheel: One of the Island’s main tourist attractions is the Great Laxey Wheel, the largest surviving water wheel in Europe. This feat of engineering, with a circumference of 228 feet, was designed by the Manx engineer Robert Casement and was first powered up in 1854 to provide water to the neighboring mine.

Each Proof set is packaged in a stunning color presentation pack that contains a complete set of currency, with images of the actual monuments and landmarks portrayed on the coins.

For more information on this and other sets offered by the Treasury of the Government of the Isle of Man, please visit the Web site of the Pobjoy Mint.  International sales will be dispatched where applicable.