The Government & Treasury of the Isle of Man have launched (12th May) two new coins which remember the 70th anniversary of D-Day, the landing of allied forces onto the shores of France which was considered the turning point in the struggle to defeat Nazi Germany and Hitler’s occupation of much of the European continent. The Allied invasion of Normandy during World War II which consisted of armed forces from Canada, the Free French Forces, the United Kingdom, and the United States was the largest seaborne invasion in history. Planning for the operation began in 1943 but in the months leading up to the invasion, the Allies conducted a substantial military deception in an effort to mislead the Germans as to the date and location of the Allied landings which had long been anticipated by Axis forces.

General Dwight D. Eisenhower of the United States Army was appointed commander of Supreme Headquarters Allied Expeditionary Force and General Bernard Montgomery, affectionately known as “Monty” of the British Army was named as commander of the 21st Army Group, which comprised all of the land forces involved in the invasion. 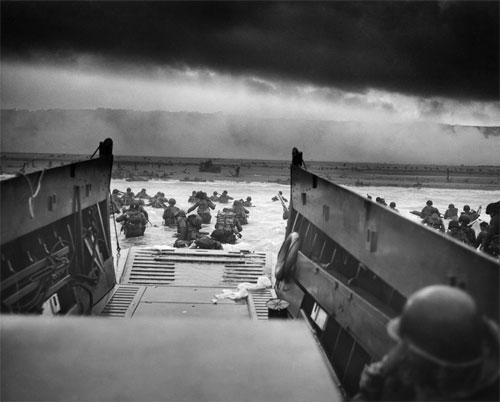 12,000 planes of the Allied Air Forces cleared the Luftwaffe from the skies and photographed enemy defenses whilst the Allied Naval Forces patrolled the English Channel, patrolled the beaches and their defenses. On D-Day itself, the 6th June 1944 – and despite unfavorable weather conditions, more than 1,000 transports dropped paratroopers to secure the beaches. Amphibious craft landed over 130,000 troops on five beaches along the Normandy coast. British and Canadian forces landed on Gold, Juno and Sword Beaches whilst American troops landed on Utah and Omaha Beaches. In the weeks following the invasion, Polish forces also participated, as well as contingents from Belgium, Czechoslovakia, Greece, and the Netherlands. Out of 156,000 fighting men, the allied armies suffered nearly 12,000 casualties with 4,414 confirmed fatalities. The five bridgeheads or landing points were not connected until the 12th June, by which time the Allies held a front of around 60 miles (97 km) long and 15 miles (24 km) deep. Caen, a major objective, was still in German hands at the end of D-Day and would not be completely captured until the 21st July. From this new front, the allied armies continued their push into Western Europe with a Soviet offensive on the Eastern front from Belorussia occurring on the 22nd June and resulting in the almost complete destruction of the German Army Group Centre. Within less than a year from the D-Day launch, the Third Reich of Hitler’s Nazi regime capitulated entirely and an unconditional surrender was accepted by the Allied command on the 7th May 1945. 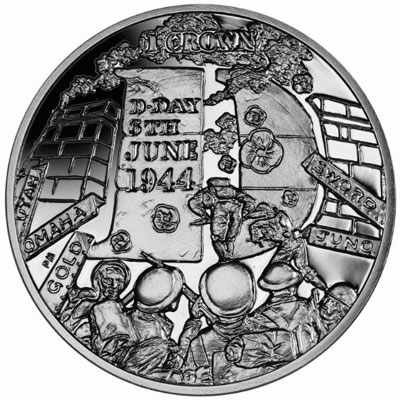 The coins, with their stylized design and vivid color transfers are produced by the Pobjoy Mint, UK and depict Allied Troops storming a bunker on D-Day with signs naming the five landing beaches with a large ‘D’ to represent D-Day.  Also shown are several poppies, the symbol for those who gave their lives for their country.  The obverse of the coin features an effigy of Her Majesty Queen Elizabeth II by Ian Rank-Broadley FRBS.

The coins are struck in both Cupro-nickel (BU) and sterling silver (proof) the silver examples including color applications of the poppies on the design. For more information on these and other coins issued by the Isle of Man Treasury, please visit the website of the Pobjoy Mint at: http://www.pobjoy.com/ukworld/section.php/815/0 Information offered in English – international orders dispatched.