The Isle of Man Treasury have issued (28th May) a coin in tribute to the 200th anniversary of the re-discovery of Petra, one of the designated World Heritage Sites since 1985.

Petra, from the Greek word meaning ‘rock’ is a city in Jordan that is famous for its rock cut architecture and sophisticated water system. It was established around the 6th Century BC as the capital city of the Nabateans, the ancient peoples of Jordan. It is an important historical symbol of Jordan as well as one of their most visited tourist attractions. The site remained unknown to the Western world until 1812, when it was introduced by Swiss explorer Johann Ludwig Burckhardt and has been described as “a rose-red city half as old as time”. 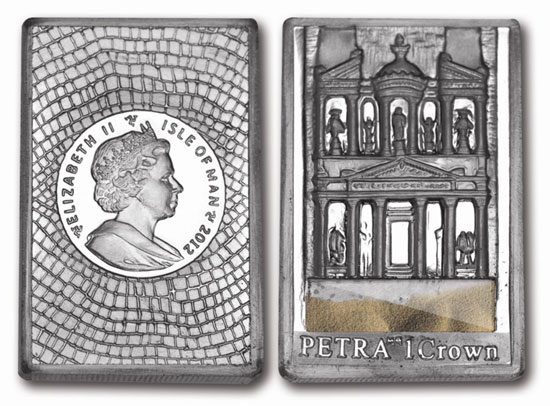 The coin, struck by the Pobjoy Mint in the United Kingdom, is an ingot-style silver piece which contains granules of sand from the site of Petra personally collected by the Pobjoy Mint’s Director especially for the project. The reverse of the coin depicts a detailed image of the edifice of the treasury at Petra with a small windowed compartment of sand just below the primary design. The text “PETRA 1 Crown” is seen underneath the window.

The obverse of the coin features an effigy of Her Majesty Queen Elizabeth II by Ian Rank-Broadley FRBS within a circular coin-shaped design with the effigy surrounded by a mosaic pattern relief. The year of issue “2012” is seen as part of the Queen’s legend.

For more information on this and other coins issued by the Isle of Man treasury, please visit the website of the Pobjoy Mint at: http://www.pobjoy.com/ukworld/page.php?xPage=index.html