The Treasury of the Isle of Man Government has issued their much loved and eagerly collected “Cat” crown which depicts a specific breed in the feline world. This year’s breed chosen to grace the reverse of the crown is the Snowshoe cat – accompanied by two of her kittens. The coin is struck by the Pobjoy Mint, UK and is distributed on behalf of the Treasury of the Isle of Man.

Originating from the United States of America in the 1960s, The Snowshoe – considered a rare breed of cat first appeared in Philadelphia when a Siamese breeder’s cat had kittens with white feet.  Despite having existed for 45 years, Snowshoes are rare due to the difficulty of reproducing the correct coat markings. The short-haired coat consists of solid and white patterns whilst the points (ears, tail, face mask) are solid black based colors. The Snowshoe is a medium large cat and is longer in length than many cats. They are generally affectionate, sweet-tempered and mellow. Those who own this particular of cat say they enjoy human company and are very social and docile. Snowshoes are also known to be very intelligent and can learn to open doors and can be taught tricks. Snowshoes also enjoy water and unlike many other cat breeds, have been known to swim on occasion. 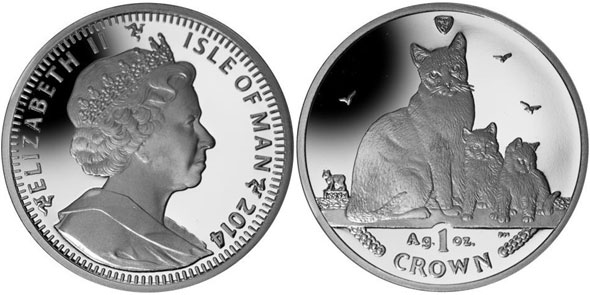 The reverse of the coin, aside from the charming depiction of the Snowshoe family, also includes the coin’s denomination and a small cameo image just to the lower left – of the very cat that inspired the original “cat” crown in 1988, the tailless Manx cat, indigenous to, and for many years only found on the Isle of Man. The obverse carries the head & shoulders formal effigy of Her Majesty Queen Elizabeth II by Ian Rank-Broadley FRBS.

For more information on this and other coins issued by the Isle of Man Government, please visit the website of the Pobjoy Mint at: http://www.pobjoy.com/ukworld/section.php/1054/1 Information offered in English, International orders fulfilled.