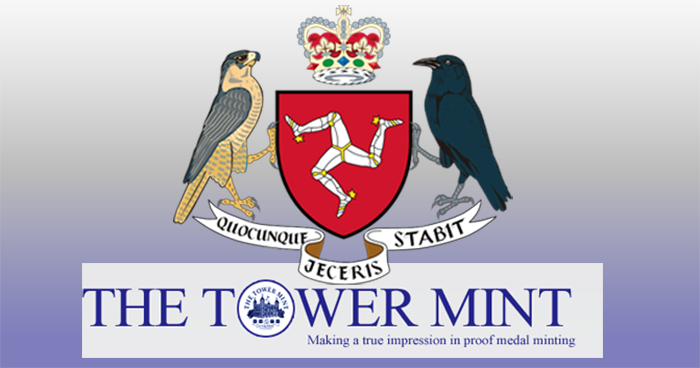 It was a day of all change on Thursday the 9th March when representatives of the Treasury of the Isle of Man attended the first-strike ceremony and inauguration of the new series of circulation coinage for the self-governing Crown dependency. From the 1st April, the Tower Mint, United Kingdom, become the island’s official minter, having won a bid tendered out last year. The change of minters has been described as a new phase of coinage for the Isle of Man, one that will usher in a new era of dynamic and bold designs as well as a new circulation £5 coin.

The day was hosted by the owner of the Tower Mint, the world-renowned sculptor and artist Raphael Maklouf, who introduced his team and greeted assembled mint guests. Among them were representatives from blank suppliers, distributors, marketing, and numismatic editors and publishers. Mr. Maklouf introduced Ms. Paula Primrose, the Isle of Man’s chief accountant, as well Mr. Colin Campbell, the Isle of Man’s investment and banking manager, whose job it would be to strike the new coins. Being struck today was a new commemorative coin celebrating 150 years of the first general election of the House of Keys—the directly elected lower branch of Tynwald, which took place in April 1867.

Mr. Maklouf commented further that today was a very special day not only for the Tower Mint but for the Isle of Man, who would be inaugurating a new effigy of HM Queen Elizabeth II on their 2017-dated coinage. The new portrait is the work of Jody Clark, product designer and engraver at the Royal Mint. The portrait was created at the same time as the definitive, fifth portrait that has been in use on all British circulation coins since March 2015. 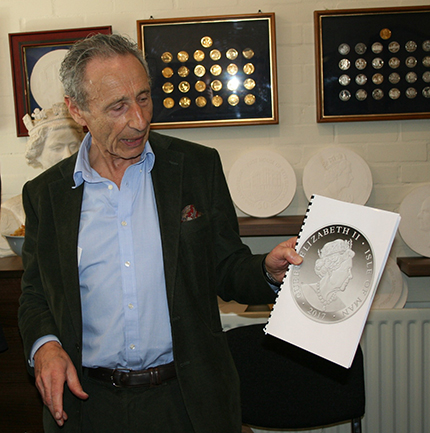 Raphael Maklouf unveils the new Commonwealth portrait that will be seen on Isle of Man coins from this year. The Isle of Man will be the first to use the new effigy.

After introductions were completed, the time to strike the new coins was at hand, and it was Ms. Primrose who duly carried out the honour. She pushed the minting machine’s button, and a new, Proof-quality commemorative 50 pence emerged to the delight of all guests, who had an opportunity to inspect the new coin. It was then passed to Mr. Maklouf, who encased it in a special frame and presented the coin to Ms. Primrose. A second commemorative 50-pence coin was then struck by Mr. Colin Campbell, who was also presented with his own strike. Mr. Campbell commented the coin would be proudly shown to treasury representatives on his return to Douglas, the capital city and seat of the Isle of Man government. 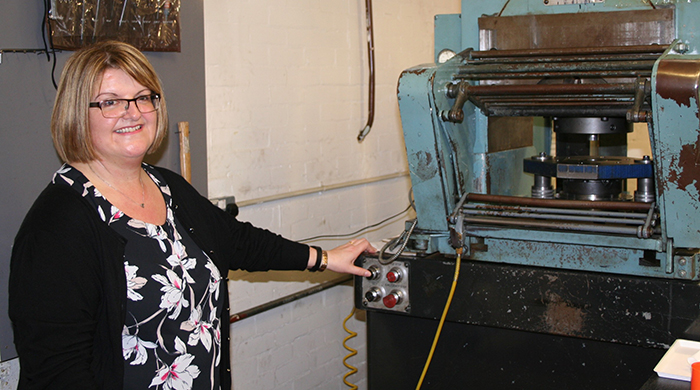 Ms. Paula Primrose, chief accountant of the Isle of Man Treasury, strikes the first coin on the day: a new commemorative 50-pence Proof coin that marks the 150th anniversary of the first election of the House of Keys,  x1867. 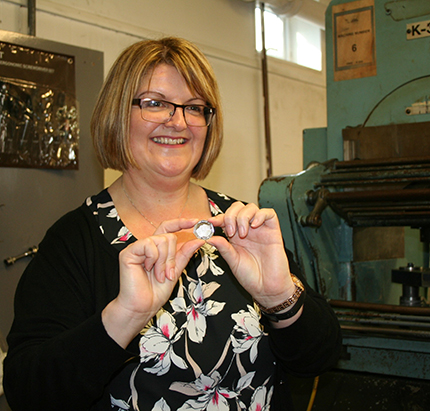 Ms. Primrose holds up the first 2017-dated coin struck by the island’s new official minter from the 1st April. 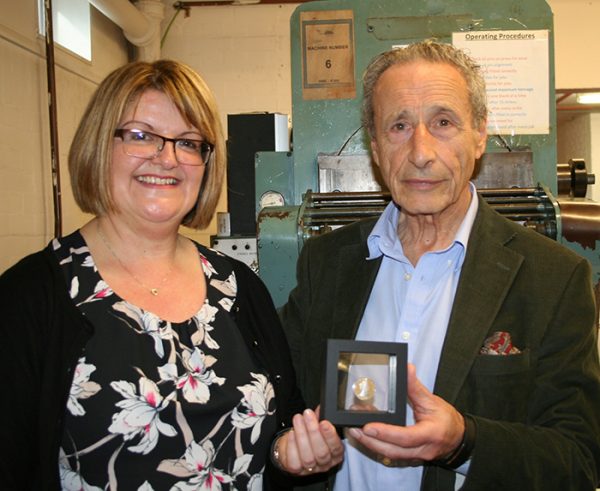 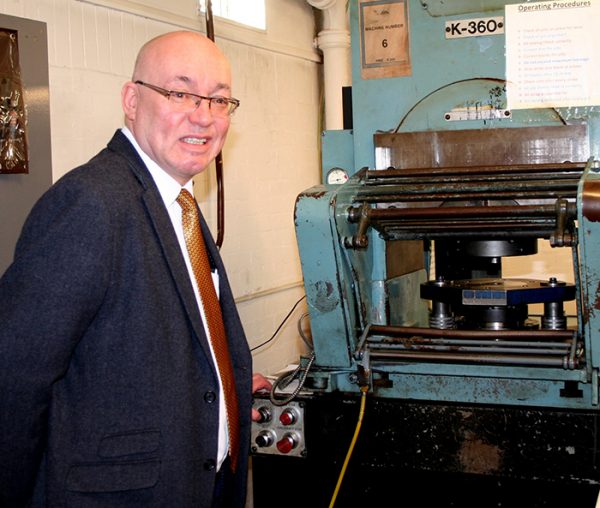 Mr. Colin Campbell, investment and banking manager for the Treasury, strikes the second 2017-dated Tower Mint coin on the day. 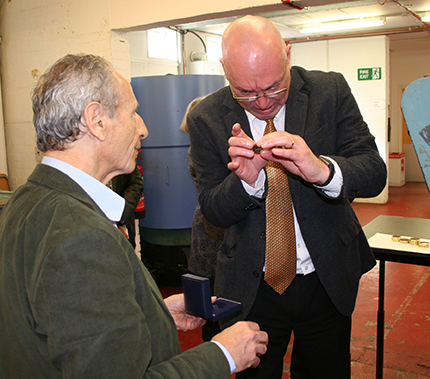 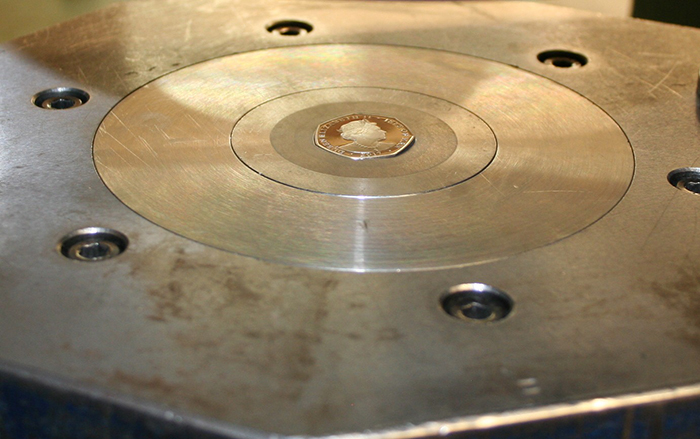 The final product, a Proof 50-pence coin that now includes a new portrait of HM Queen Elizabeth II as created by engraver Jody Clark of the Royal Mint.

The visit for treasury representatives and guests included a tour of the Tower Mint’s production floor, which also saw the start of the minting of new £1 coins. In total, the Isle of Man will introduce seven new coins this year with denominations from £5 to 5 pence and with entirely new reverse designs, including a new royal portrait on the obverse. With the tour and the strike ceremony concluded, the Tower Mint management offered guests the chance to also strike their own visitor’s gold-plated medal, designed by Mr. Maklouf.  New Isle of Man coins will be presented to the Manx public during a launch ceremony in Douglas on the 10th April, when the coins will officially be released. The new agreement between the government’s treasury and the Tower Mint will be in effect from the 1st April and will continue for a 10-year period. The Tower Mint commented that collector sets including Brilliant Uncirculated mint and Proof sets, in base metal as well as precious metals, will go on sale to eagerly awaiting collectors at a later date. The Tower Mint will also be working closely with Westminster Collections, premier distributors of foreign and British coins, who will play a key role in further activity for the sale and marketing of Isle of Man products. 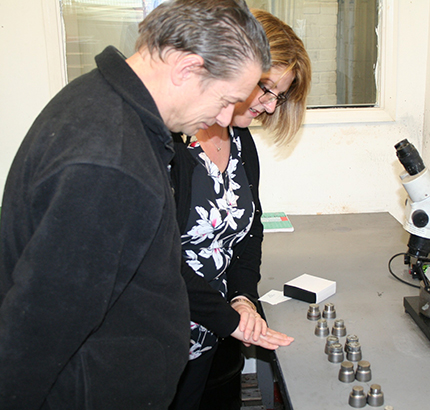 Ms. Primrose inspects the remaining dies, which will produce the other denominations in time for their official release date of the 10th April. 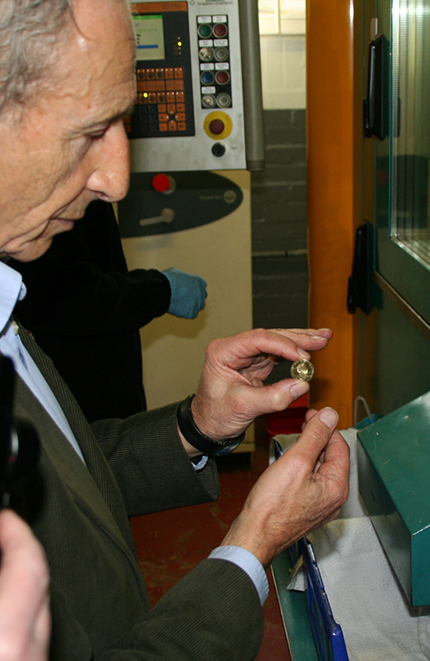 Mr. Maklouf inspects the newly minted £1 coins, which commenced on the day in time for visiting guests to see the results. 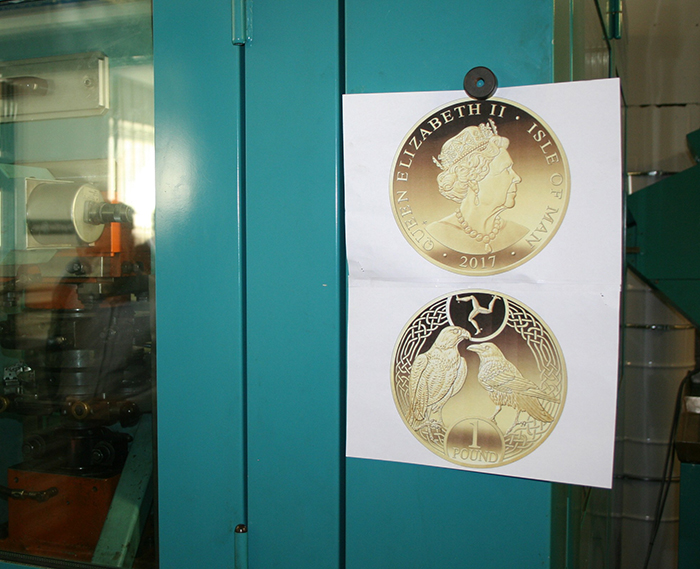 A work sheet is posted on the minting press, showing the new £1 coin. 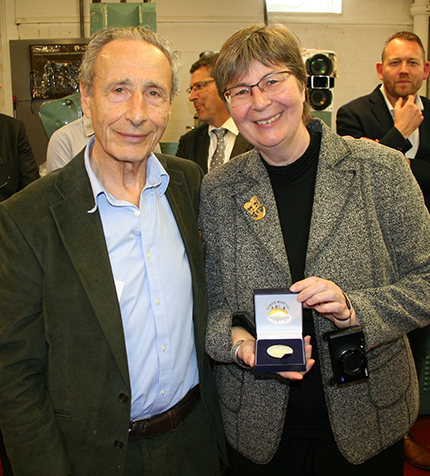 Coins Weekly editor and Coin Update contributor Ursula Kampmann attends the Isle of Man’s first-strike ceremony and poses with Raphael Maklouf after striking her own visitor’s medal at the Tower Mint. 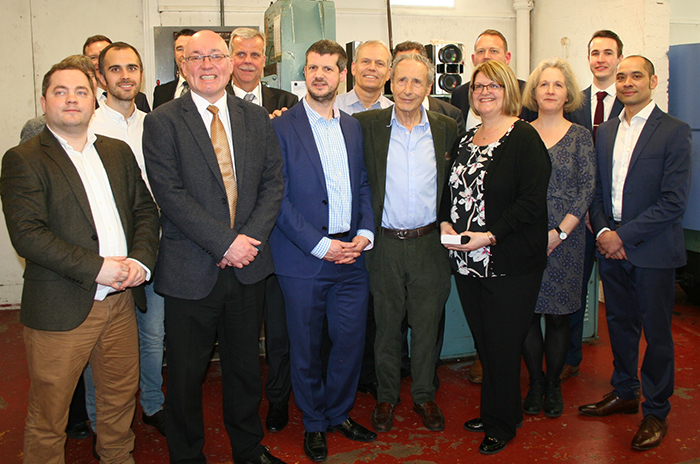 My thanks go to Mr. Elliot Dawson, company director at the Tower Mint, for his kind assistance on the day—it is greatly appreciated. For more information about the Tower Mint, U.K., please visit their website.   ❑

Onward and Upward: Interview with Taya Pobjoy, managing director of the Pobjoy Mint