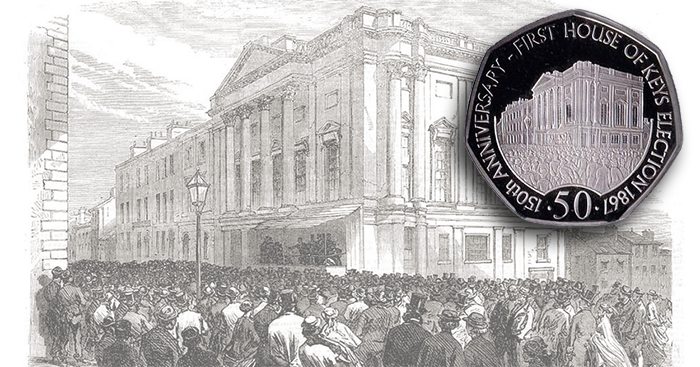 The Treasury of the Isle of Man government have launched their latest commemorative coin, celebrating the 150th anniversary of the first direct elections to the House of Keys (the lower house of the Manx Parliament), which took place in 1867. This is the Treasury’s first commemorative coin since the naming of a new mint for production of Manx coins late in 2016.

The House of Keys, previously a self-elected body, became an elected chamber in 1867 for the first time. Mid-19th-century calls for reform were led by journalists Robert Fargher and James Brown. Following negotiations between Governor Loch and the U.K. authorities, reforming legislation was enacted in 1866 giving the vote to male landowners and allowing the Tynwald some say over finance for the first time in a century. The franchise was extended in 1881 to women landowners and in 1919 to all adults.

The seven-sided new coin is designed by the Tynwald Library in conjunction with Isle of Man Treasury and Tower Mint Limited. The reverse side depicts a scene with a crowd of people celebrating polling at the old Court House in Athol Street, Douglas, on the 3rd April 1867. Around the main design is the inscription 150th ANNIVERSARY – FIRST HOUSE OF KEYS ELECTION 1867. Below the primary design the coin’s denomination is shown with the number 50. The obverse side of the new coin includes a new effigy of HM Queen Elizabeth II, who, as Lord of Man, is depicted on all Manx coinage since their initial introduction in 1971. The new effigy is the work of Jody Clark, product designer and engraver at the Royal Mint; it will feature on all new Manx coins from this year.

Please visit the website of the Isle of Man Post Office’s e-shop for more information on these and other coins issued by the Isle of Man Treasury. Coins are on sale from today, the 10th April, which is the official date of release for all 2017-dated Isle of Man coins.  ❑