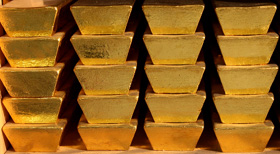 The COMEX has just dropped the minimum margin requirement for gold contracts to $6,075 from its former $6,751 minimum.  This move does not make economic sense as the price of gold is now within 2% of its all-time high COMEX close.

You have to remember that common sense and consistency aren’t the only factors that the COMEX considers when setting these requirements.  Could it be that the COMEX is trying to lure speculators and investors away from the silver market by offering them greater margin opportunities in the gold market?

Think about it for a minute.  By the end of this month, the next round of COMEX silver options will expire and the first day of notice for delivery of July 2011 silver contracts will occur.  Both of these events could trigger strong demand that could seriously deplete COMEX registered silver inventories.

On June 16, 2010, the COMEX had 119.5 million ounces of total silver in its bonded warehouses.  Since then, there has been a steady outflow of silver from these warehouses, especially of the registered silver that is available to fulfill contract deliveries.  Early this week, total COMEX silver inventories had fallen below 99 million ounces, a decline of more than 17% in the past year.  Even more important, the quantity of inventories that were registered had fallen to record low levels below 30 million ounces!  The remaining COMEX inventories are “eligible” which means that that they are owned by investors who are simply storing the silver in COMEX warehouses.  Eligible inventories cannot be used to fulfill COMEX contracts unless the individual owners choose to make them available for that purpose.

When the March and May 2011 COMEX silver contracts matured, a significant percentage of them were settled for cash, as is permitted under COMEX rules.  However, the cash prices that contract owners received were at levels reported to be as much as 30% higher than the prevailing spot prices!  Looking back at when the December 2010 COMEX silver contracts matured, it appears there may have been a larger than normal percentage of contracts that were settled for cash.

The sellers of COMEX contracts obviously would not be willing to pay up to 30% above the spot price to settle their liability for cash if they had the alternative of simply delivering physical silver.  The fact that comparatively little silver is being removed from COMEX registered inventories to fulfill maturing contracts is a significant indicator of a major physical supply shortage.

I don’t know if the COMEX reduced gold margin requirements in order to draw some leveraged investors away from holding maturing silver options and commodity contracts.  The timing is definitely suspicious.

Today was not a good day for the US government on multiple fronts.  The unofficial Misery index, which adds the Bureau of Labor Statistics official figures for unemployment and the rise in consumer prices stands at 12.7, which is the highest figure since 1983!  From June 1993 through May 2008, the Misery index had been below 10.  This index has been continuously above 10 since November 2009.

The news got worse from there.  At the International Monetary Fund press conference in Sᾶo Paulo, Brazil the United States was lumped with Greece, Ireland, and Japan as being the countries most in need of restoring their public finances to reasonable debt levels.

In a recent Bloomberg interview, former Federal Reserve Chair Alan Greenspan warned that a default by the Greek government could push the US back into a recession.  He further said that, “chances of Greece not defaulting are very small.”  He further emphasized the risk by saying that the risk of a Greek default was now “so high that you almost have to say there’s no way out.”

Today, Germany and France put together another bailout package for the Greek government.  There is widespread fear that Greece may default on its debt and start a domino effect of defaults much worse than experienced when Lehman Brothers collapsed in 2008.  In the commercial market, Greek companies are already paying 27% interest for 2-year loans, which is a rate so high that it almost assumes that a government default is inevitable.  Today’s bailout package did not cure the problem of the Greek government spending beyond its means.  Instead, dealing with the debt problem has been pushed a few months into the future.

If Greece goes into default, there is a very real risk that Ireland, Italy, Spain, Portugal, California, New York, and Illinois, to mention only a few, could themselves quickly begin defaulting on their debts.

As I have been suggesting all along, to protect yourself you might want get rid of some of your fiat currencies to increase your holdings of physical gold and silver, the only forms of money that have never failed.