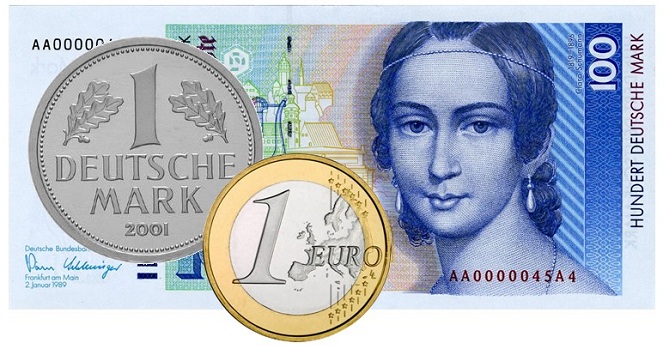 According to a recent YOUGOV survey of the German public, 54 percent of Germans have legacy Deutschmarks (DM) sitting around somewhere in their home either for sentimental reasons or because they believe the DM just might be re-introduced into circulation at some point in the near future.

Although the DM has not had legal tender status for 14 years, a well-known supermarket in Germany has announced they will again accept the German currency for one month. As part of a promotional campaign, Kaufland will accept outstanding Deutschmark banknotes and coins for nominal purchases from January 4 to 30. The cashiers will simply tabulate the euro price to the official exchange rate of DM 1.95 per EUR. Kaufland has also re-designed many of its products’ packaging to a more retro-style 1960’s design in order to enhance the experience.

Kaufland has noted that the promotional campaign has nothing to do with any political or public movement to re-introduce the DM as Germany’s legal tender, and that they are simply encouraging Germans to use the estimated €6 billion DM outstanding in the German economy.

Recent calculations made by the German Federal Bank or Bundesbank in November of 2015 estimate that 168 million Deutschmark notes and 24 billion coins were never exchanged, amounting to more than €6 billion in unaccounted for or un-cashed funds. If these calculations are to be believed, this would mean that nearly 54 percent of all previously issued Deutschmark coins are still in the hands of the general public. This estimate also figures that these coins may also no longer be on German soil as the DM was once the legal tender of the former Yugoslavia, and many coins produced in silver were most likely melted down for their precious metal content.

If the political movement Alternative for Germany — or AfD — had their way, the re-introduction would be nationwide and permanent. This recent political movement or party, founded just three years ago, are generally supportive of Germany’s membership of the European Union but speak out against the existence of the euro currency and the use of bail-outs for euro zone countries whose economies have not performed well.

Germany, along with eleven other original euro zone members, adopted the single currency or “euro” on January 1, 2002, when more than 300 million Europeans experienced the world’s largest currency change-over ever organized. Presently, nineteen member states of the European Union are also in the euro zone.

According to information posted on the Bundesbank Web site, DM currency can be “exchanged in unlimited amounts, DM banknotes and/or coins for euro indefinitely and free of charge at all Deutsche Bundesbank branches.” For more information on the Kaufland promotion, please visit their Web site. Information is posted in German only.

If any of our readers take part in Kaufland’s promotion, we would love to hear from you. Why did you exchange your leftover Deutschmarks and what did you buy?