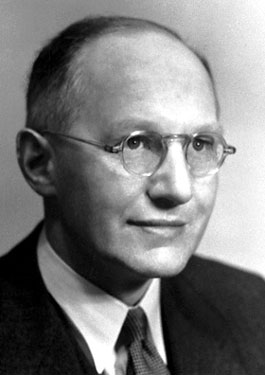 The Central Bank of Ireland have launched their latest silver crown coin which further highlights contributions of Irish scientists and inventors. The new coin honors the work of Ernest Thomas Sinton Walton (1903 – 1995), the only Irish person to win a Nobel Prize in Physics. His achievement in artificially splitting the atomic nucleus was one of the great scientific breakthroughs of the 20th century.

Walton was born in Abbeyside, County Waterford, Ireland. His father was a Methodist who was compelled to move once every three years to different parishes, and this practice brought Ernest and his family to many parts of the country until Walton became a boarder at the Methodist College Belfast in 1915, where he excelled in science and mathematics. In 1922 Walton won scholarships to the respected and eminent Trinity College, Dublin for the study of mathematics and science where he was awarded bachelor’s and master’s degrees in 1926 and 1927, respectively.

Having graduated in Experimental Science and Mathematics from Trinity College Dublin, Walton won a research scholarship to work with Sir Ernest Rutherford at the Cavendish Laboratory, Cambridge. During the early 1930s Walton and John Douglas Cockcroft developed a proton accelerator which they used to split the lithium nucleus. Their experiments confirmed a number of scientific predictions arising out of relativity theory and quantum mechanics and proved that a large amount of energy could be released in a nuclear reaction, thus providing the first experimental verification of Einstein’s famous mass/energy equivalence equation, E=mc2. In 1951 Walton and Cockcroft were awarded the Nobel Prize in Physics for their pioneering work on the transmutation of a nucleus by artificially accelerated atomic particles.

Although he retired from Trinity College Dublin in 1974, Walton retained his association with the Physics Department at Trinity up to his final days. Shortly before his death he marked his lifelong devotion to Trinity by presenting his Nobel medal and citation to the college. Walton died in Belfast on the 25th June 1995 at the age of 91. He is buried in Deansgrange Cemetery, Dún Laoghaire–Rathdown. Widely respected and much admired, he was regarded and remembered as a modest, unassuming man. Walton was survived by his wife Freda and their five children. 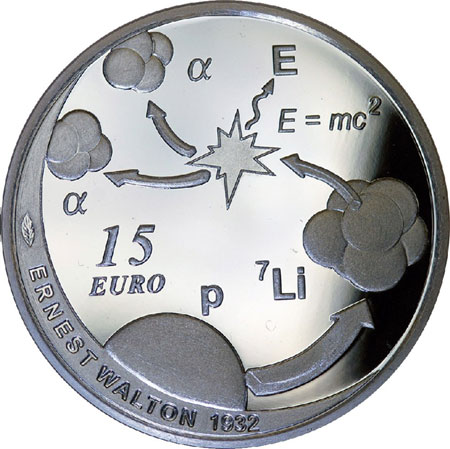 The coin, struck by the Pobjoy Mint, UK on behalf of the Central Bank, is designed by veteran Central Bank of Ireland coin artist Rory Breslin whose last design was for the Irish silver crown issued in 2013 on the occasion of the centennial anniversary of the Dublin “lock-out”. The obverse of this coin includes elements of Walton and Cockcroft’s mathematic equation, the now familiar theory of relativity “E=mc 2” prominently part of the overall design. Text along the lower left edge includes “ERNEST WALTON 1932” in reference to 1932 being the year Walton published his findings and theory. The reverse includes an image of the Harp, Ireland’s national symbol along with the text “EIRE” and the year of issue “2015” on either side.

The coin, which is accompanied with a numbered certificate of authenticity, is the second in the series of Science and inventions of Ireland and is available from the 14th January with a lower mintage in comparison from the first coin, issued to honor John Philip Holland, inventor of the modern submarine.

It was also announced that the Central Bank of Ireland, in collaboration with the BT Young Scientist & Technology Exhibition has given out a number of the new Walton commemorative coins as a special awards ceremony which was held on the 8th January. The exhibition and awards are in recognition of Walton’s achievements.

For more information on this and other coins offered by the Central Bank of Ireland, please visit their website at: http://www.centralbank.ie/paycurr/collector/Pages/Coinsets.aspx Information offered in English and Gaelic – international orders dispatched.