The Central Bank of Ireland today unveiled the winning designs for their upcoming 2016 coin program honoring the centennial anniversary of the Easter Uprising, which launched the movement that achieved Irish independence from Great Britain six years later.

The designs for the silver and gold coins are the work of Michael Guilfoyle, a familiar name with the Central Bank of Ireland, who has designed many coins within the last decade. Another Guilfoyle design will appear on a coin celebrating the 70th year of Peace in Europe, due for release on October 27.

The €2 coin is the work of Emmet Mullins and is the first ever commemorative coin issued independently by the Central Bank of Ireland. The coin features a representation of Hibernia, the Latin name for Ireland; the centenary dates and the word HIBERNIA appear in hand-rendered lettering influenced by the Book of Kells. A quantity of 4,500,000 coins will enter circulation toward the beginning of 2016. The commemorative €2 will be included in the 2016 Proof set, along with the ordinary circulation design.

The newly announced silver and gold coins feature the statue of Hibernia standing atop the General Post Office on O’Connell Street in Dublin. The designs are focused around the actual Proclamation of the Irish Republic, which was read by Patrick Pearse on the steps of the General Post Office on April 24, 1916. On this coin Hibernia features along with an arrangement of key words and phrases from the proclamation. The obverse of the coin bears the traditional representation of the Irish harp and the year of issue, 2016. The silver coin will be issued as a crown-sized issue with the gold coin being planned as a sovereign-sized issue; further information on the gold coin will follow after finalization. 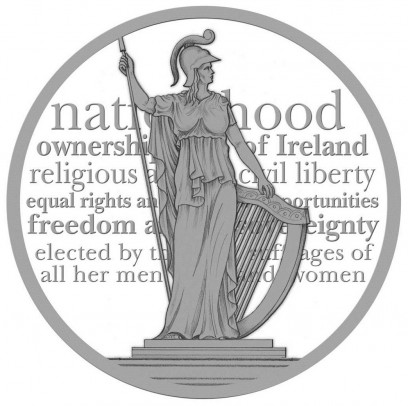 The winning designs are the result of a coin design competition announced in January 2015. The Central Bank asked for artists and designers interested in designing commemorative coins for 2016 to submit their examples and ideas.

Emmet Mullins is a designer, illustrator and art director.  His previous work for the Central Bank includes the collector coins commemorating the Ploughman Banknotes in 2009 and the coins celebrating the 1928 Irish coin designs by Percy Metcalfe, released between 2010 and 2012 (Horse, Salmon, and Hound).

The coins themselves will become available in March 2016 after their official unveiling. We will have additional information on the 2016 program as it becomes available. The Central Bank are anticipating strong demand for both the gold and silver coin, as they will be part of a larger series of coins celebrating the centennial anniversary of Irish independence through 2022.  For more information on the coins offered by the Central Bank of Ireland, please visit their Web site. Information is offered in English, with international orders dispatched where applicable.

You can peruse a Central Bank of Ireland infographic illustrating the process of designing and producing the coins below. 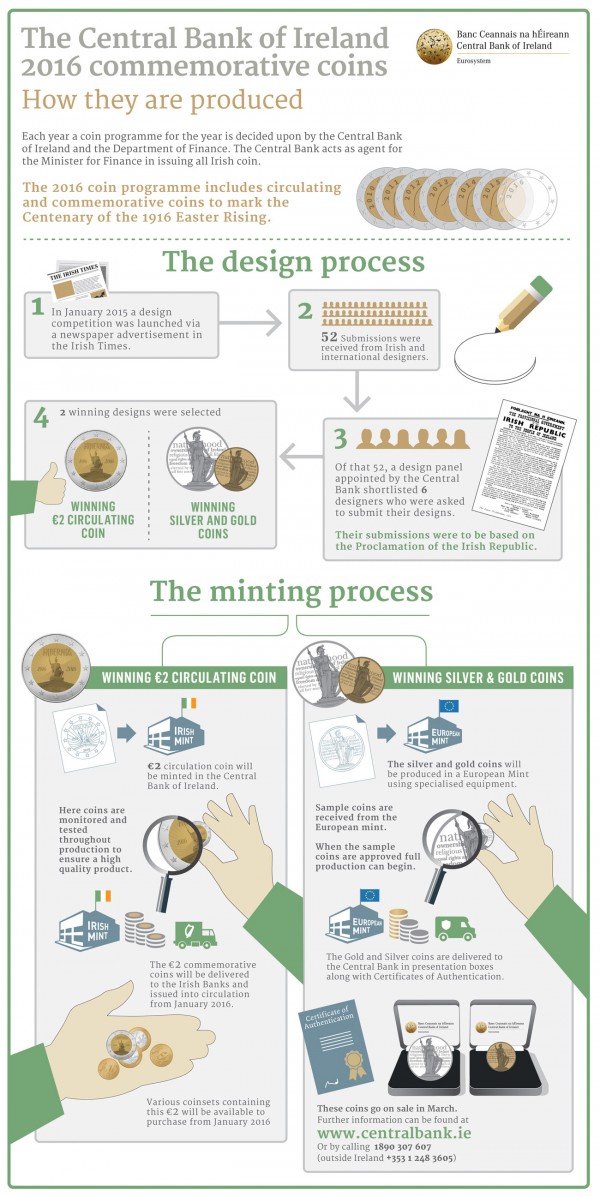