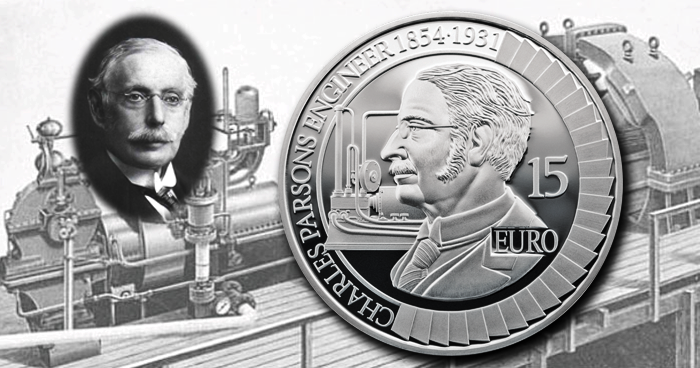 The Central Bank of Ireland have launched their next silver Proof collector coin which pays tribute to the achievements of engineer Sir Charles Algernon Parsons (1854–1931). The coin is part of the bank’s ongoing series of “Irish Science and Inventions,” which was first launched in 2014. Parsons’s invention of the steam-turbine engine was a major breakthrough in electrical engineering and electric power generation. Parsons later applied himself to marine propulsion, and his steam turbines revolutionised marine transportation and naval warfare, increasing both the speed and efficiency of seafaring vessels. He received many honours in recognition of his engineering genius, including a knighthood in 1911. 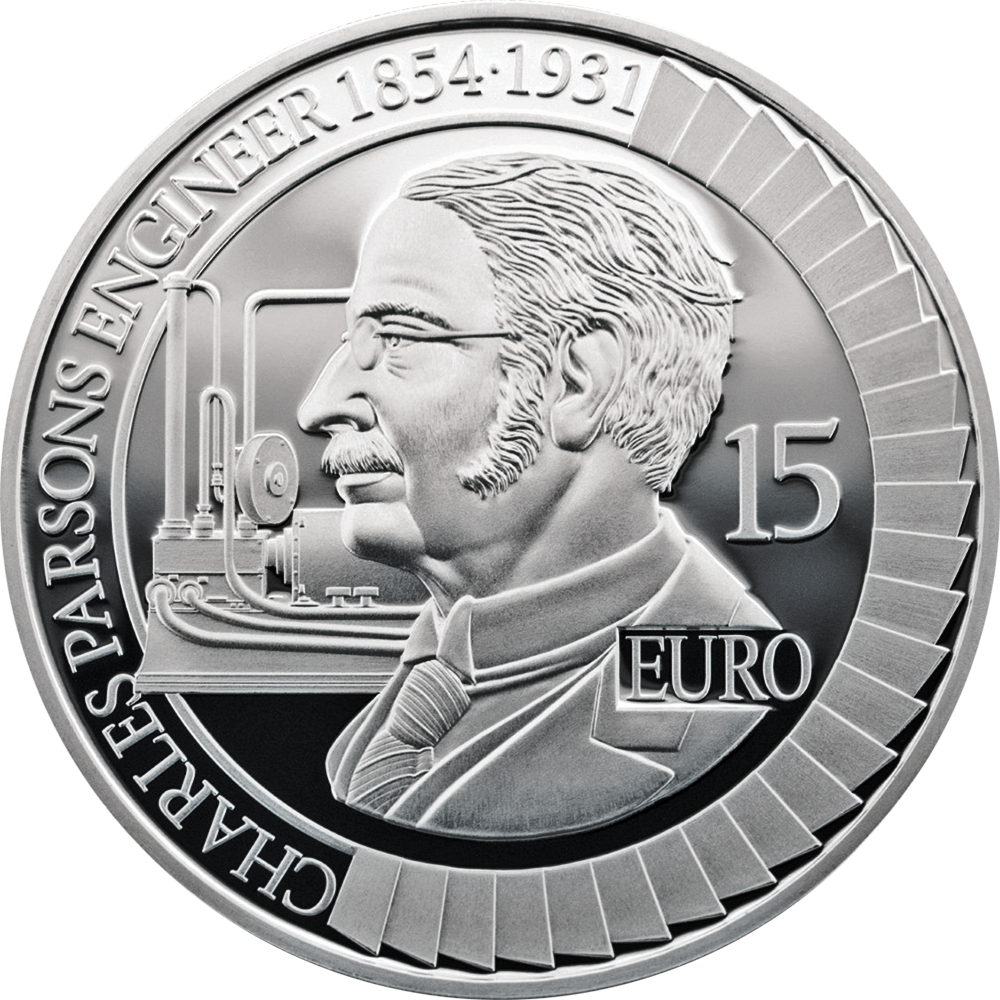 The coin is produced in Germany by the Mayer Mint GmbH on behalf of the Central Bank of Ireland. The obverse side of the coin is designed by artist Antonella Napolione and features a profile portrait of the engineer with an early model of his steam-turbine engine, encircled by an inscription and a representation of turbine blades. 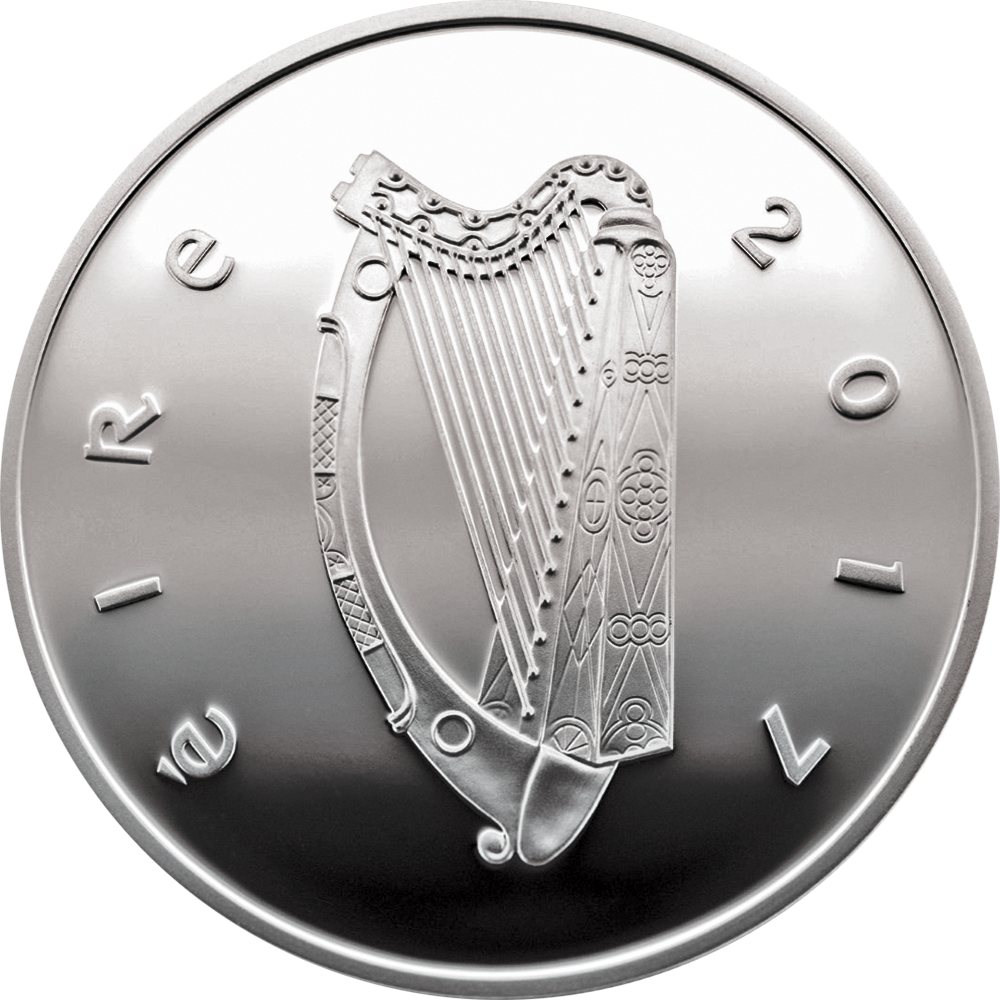 The reverse illustrates the national symbol of Ireland, the harp, along with the word EIRE to the left of the harp and the year 2017 to the right.

The €15, Proof-quality silver coin is the third in the series, as none were issued during 2016. The official launch of the coin will be on the 31st August. Thereafter, they will be available to the general public from the 1st September by contacting the collector-coin department or by visiting the website of the Central Bank of Ireland. 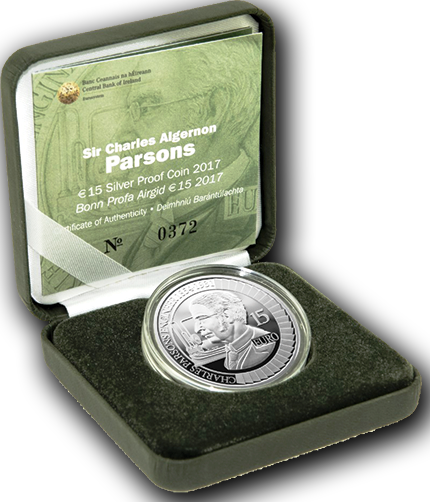 Remembered as one of the greatest engineers that Ireland has ever produced, Parsons is also credited for his work as an engineer on dynamo and turbine design, in addition to power generation. He also developed optical equipment for searchlights and telescopes.

Parsons was born in London into an Anglo-Irish family on the 13th June 1854, as the youngest son of the famous astronomer William Parsons, Third Earl of Rosse. The family seat is Birr Castle, County Offaly, Ireland, and the town of Birr was once called Parsonstown, after the noteworthy family, from 1620 to 1899.

Together with his three brothers, Parsons was educated at home in Ireland by private tutors, all of whom were well versed in the sciences and also acted as practical assistants to the earl in his own astronomical work. While in Ireland, Parsons read mathematics at Trinity College, Dublin. He then continued his education at St. John’s College, Cambridge, where he graduated in 1877 with a first-class honours degree. In a departure from the traditional role as the son of an earl, he joined the Newcastle-based engineering firm of W.G. Armstrong as an apprentice, which provided him with the practical knowledge of manufacture and construction.

Charles Parsons and his partners saw the potential for a steam turbine to drive electrical generators and sought to produce the first turbo-generators and radial flow generators for use in Cambridge’s power station in 1895. This very same electric power was, in fact, used to power the first electric street-lighting scheme in the city. At the same time, Parsons was working on marine steam turbines and began his experiments using a two-foot model boat towed by a fishing rod. These were scaled up to a full-sized yacht, the Turbinia, in 1894. The Turbinia reached a speed of 34 knots when the fastest destroyers of the day managed only 27. This was due to the success of two innovations: the steam turbine for ship propulsion and the slender hull. 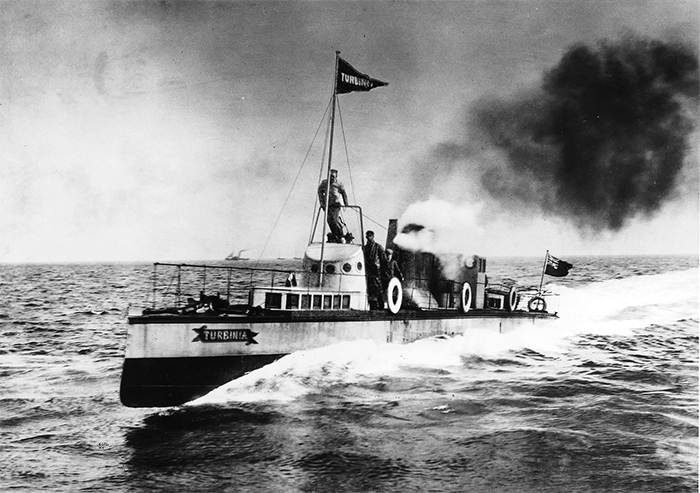 With Parsons’s improvements to propulsion speed gaining the attention of the British admiralty, Parsons was able to set up Parsons Marine Steam Turbine Company in 1897. By 1899, a turbine-driven destroyer, the HMS Viper, capable of speeds in excess of 30 knots, was launched. This success was followed by the destroyer HMS Cobra, and, by 1906, the first turbine-powered battleship, HMS Dreadnought, with a top speed of 21 knots. The Dreadnought was described as “the ship that made all its contemporaries obsolescent.” It is long believed to be fact that Parsons sketched the original design for the reaction blades in his turbine—a design which remained the standard for many years—on the back of an envelope. The initial project cost Parsons’s company a princely sum of £100,000 in research to improve its efficiency by two percent, which was a testimony to the instinctive knowledge of a true genius. Fighting in Europe had been underway since the end of 1914, and at the time of the Battle of Jutland in 1916, “super-dreadnoughts” were already being used in a battle for naval superiority. 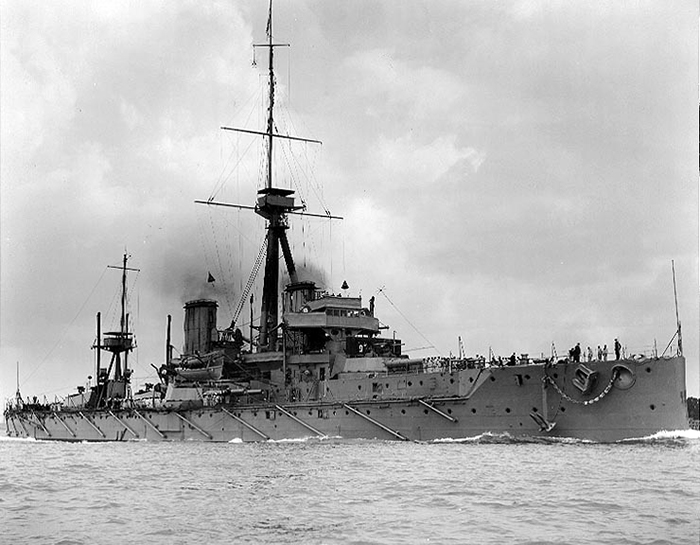 The battleship HMS Dreadnought; ships of this class would come to be known as “dreadnoughts.” (U.S. Naval Historical Center photo)

In his lifetime, Charles Parsons took out more than 300 patents for an array of inventions, improvements, and innovations, and even some for his children’s entertainment and enjoyment. The latter of these included a powered model helicopter, monoplane, and three-wheeled go-cart. His daughter, Rachel Mary Parsons (1885–1956), later continued in her father’s footsteps, sitting for the qualifying examination in mechanical sciences in 1911. When her brother left to fight in the Great War, she replaced him as a director on the board of Parsons Marine Steam Turbine Company.

Rachel Mary and her mother, Katharine, went on to become leading members of the National Council of Women, and campaigned for equal access for all to technical schools and colleges regardless of gender. Charles Parsons died on the 11th February 1931, befittingly, on board the steamship Duchess of Richmond while on a cruise with his wife. After his memorial service, he was buried in the parish church of St. Bartholomew’s in Kirkwhelpington in Northumberland, England.