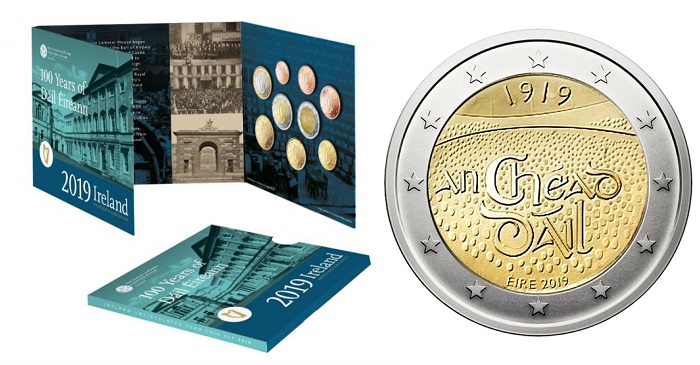 The Central Bank of Ireland has announced (13th June) the sale of the 2019-dated mint set whose theme this year is the centenary anniversary of the first assembly of the Irish Parliament, or “Dáil Éireann,” which occurred for the first time on the 21st January 1919. Governance of the new nation began on the 21st January and was conducted in the Irish (Gaelic) language to mark the symbolic nature of the meeting.

The coin set consists of all eight circulating coins from the two-euro to the one-euro cent and also includes the commemorative two-euro coin marking this auspicious national anniversary. The coin design of the two-euro commemorative, which is the work of graphic artist and illustrator Emmet Mullins, depicts the meeting place that was the Round Room of the Mansion House. Its large rotunda arcs above the large congregation assembled at that inaugural meeting and the words An Chéad Dáil and the year 1919 are scribed in a traditional uncial font. Emmet Mullins designed Irish commemorative coins previously, including the three-coin crown silver Proof pieces entitled “The Animals of Irish Coinage.”

The coins are produced at the Central Bank of Ireland’s mint facilities located in Sandyford and are presented in a colourful folder that features historical pictures of the two buildings, Mansion House and Leinster House, and their prominent architecture. The Mansion House was built in 1710 by the merchant Joshua Dawson, after whom Dawson Street is named. Dublin Corporation bought the house from him in 1715. Dublin’s Mansion House is the earliest surviving mayoral residence in these islands. Construction on Leinster House began in 1745. It was built for the Earl of Kildare by the leading architect Richard Castle (or Cassels). The building is said to have inspired James Hoban’s design for the White House in Washington. The Royal Dublin Society purchased the house in 1815.

The sets are officially available on the 19th June 2019 with a mintage limit of 8,000 sets. For additional information about these coins and others available from the Central Bank of Ireland, please visit their website.