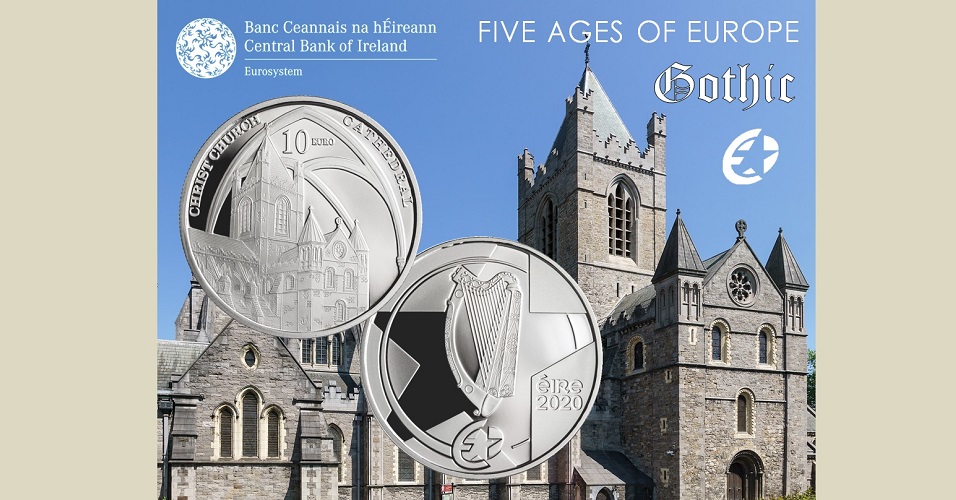 The Central Bank of Ireland has released their latest collector coin that is part of the greater Eurostar “Five Ages of Europe” Coin Programme first launched in 2016. The Eurostar Programme is an initiative dedicated to the issuance of collector coins in precious metals to highlight a common European identity. Originally planned for issue in 2020, the coins’ release was delayed due to the pandemic and is now being issued from the 4th November.

The first subject in the “Five Ages of Europe” series was in 2016 and dedicated to Contemporary Europe, the second in 2017 to the Age of Steel and Glass, the third in 2018 was dedicated to Baroque and Rococo, and the fourth subject in 2019 featured the era of the Renaissance. The fifth and final coin focuses on the Gothic Age, lasting from the mid-12th century to the 16th century. Characterised by extraordinary and dramatic feats of engineering, the architecture of this period featured tall structures, extensive use of vaulted ceilings or roofs, stained-glass window panels to let in as much natural light as possible, and pointed arches.

The latest coin from the Irish Central Bank pays tribute to one of the capital city’s most iconic landmarks, that of the Christ Church Cathedral.

The coins were designed by Sandra Deiana. The obverse side of the coin depicts Christ Church Cathedral as a splendid example of Gothic architecture. The text CHRIST CHURCH CATHEDRAL is placed along the upper edge above the design with the denomination 10 EURO shown just under the arch centred. The reverse side, which includes common elements to the design, depicts the Europa silver star, which is featured and centred. The national insignia of Ireland, the cláirseach (or Celtic harp) is superimposed over the star. The text EIRE 2020 is positioned to the lower-right and the Europa star logo itself is placed just below the larger star.

Each coin is encapsulated and presented in a Central Bank of Ireland branded custom case accompanied by a certificate of authenticity. For additional information about this coin and other coins available from the Central Bank, please visit their retail website.