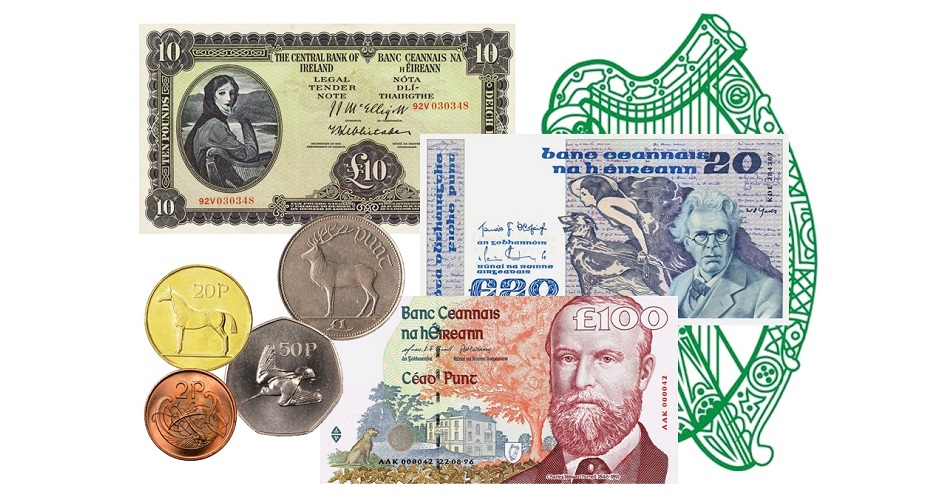 The Central Bank of Ireland has reported this month that, according to their figures, there is still an outstanding amount of €350 million worth of old punt banknotes and coins which have gone unredeemed. The Republic of Ireland was one of the 12 original member states to adopt the euro. The Central Bank reported that 90% of Irish punts were taken out of circulation by the end of 2002, leaving just €463 million unaccounted for. Taking into consideration this figure and with a population of just over 6.5 million, this equates to just over €50 of unredeemed Irish punts for every person in the country. That initial figure has only been reduced by €116 million in the last 19 years, with the Central Bank declaring, as of January 2021, there is still €224 million in legacy banknotes and €123 million in punt-denominated coins still unaccounted for or which have gone unredeemed. At the end of 2020, the Central Bank of Ireland also reported that less than €400,000 worth of Irish punts were exchanged for the year — the smallest amount redeemed in a calendar year since Ireland moved to the euro. All Central Bank of Ireland banknotes issued from the A series up to the last C series remain valid for exchange.

In countries such as France, Italy, and Spain, the ability to redeem francs, lira, or drachmas has already expired — and, in the case of Spain, is about to expire shortly, leaving many people with the possibility of holding small fortunes of worthless currency. Tens of thousands of people in the euro-zone, who, through a series of blunders, ignorance, or simply coming across unforgotten stacks of banknotes hidden by deceased family members, were unable to redeem their newly-found would-be fortunes.

Ultimately, this unredeemed money or its represented value is transferred to the treasuries of their respective countries, meaning it is regarded as a “bonus,” or windfall, which may either be applied to reducing a country’s national debt or just added to the Gross Domestic Product (GDP). Taking into consideration the four countries mentioned above, collectively the amount of unclaimed legacy currencies in euros amounted to nearly €4 billion — an extraordinary sum. Coin and banknote experts have suggested that holders of these items should consider offering these items for sale as some old francs, lira, drachmas, or pesetas have greater value as collector’s items if their condition is considered acceptable to avid banknote and coin collectors.

In Ireland, there is no time limit for the exchange of old currency notes, so, those still in possession of the old currency can still exchange them for euros. For additional information about legacy currencies which are still redeemable, please visit the website of the European Central Bank.